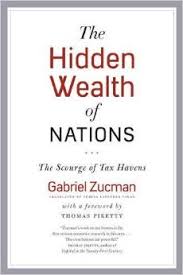 Gabriel Zucman explains the scourge of tax havens in a surprisingly accessible and lucid prose in his new book, The Hidden Wealth of Nations. This slim but fact filled book however, underestimates the scope of the problem. He short changes the depth of the problem by relying on only one of several methods needed to calculate  hidden wealth.

The book offers a helpful review the history of how tax havens have developed following World War I. European governments chose to raise taxes on the wealthy to pay for reconstruction and for debt accumulated during the war. When marginal income tax rates rose from 4 or 5 per cent to over 50%, Swiss bankers saw an opportunity to help the wealthy in Europe and the U.S. evade taxes. This process was aided by the growth of financial securities overtaking real estate as the main form of wealth.

Deposits increased more than tenfold between 1920 and 1938 - the eve of World War II. The Swiss thwarted several post-war attempts by American and British governments to collect taxes owed by their wealthy citizens by falsifying ownership through use of trusts fronted by Swiss banks and shell companies registered in Panama. They enjoyed a very profitable virtual monopoly on the tax haven business until the end of the 1970s.

In the 1980s new centres of wealth management emerged in Hong Kong, Singapore, Jersey, Luxembourg and the Bahamas. Although Switzerland managed to hang on to the 6% of  global wealth that was deposited in Swiss banks, almost all the growth (which has increased to almost 10%) has been captured by the new tax havens who offer secrecy as well as low taxes. While the Swiss have introduced some reforms (anonymous numbered accounts are no longer allowed) this has been undermined by their allowing trusts, shell companies and foundations registered in other tax havens to open accounts in Swiss banks.

Zucman  dissects several failed attempts to reign in tax havens including the G20/OECD on-demand exchange of information, the American Foreign Account Tax Compliance Act (FACTA) legislation and the European Union’s Savings Tax Directive. He estimates that globally about 8% of households’ financial wealth is held in tax havens. That works out to be about $7.6 trillion dollars or about $200 billion a year in lost revenue. He arrives at these numbers by comparing the national balance sheets to identify the difference between the assets and liabilities between nations. This seems like an elegant and simple solution to estimating what is hidden in tax havens.  But Zucman admits that this estimate “excludes a certain amount of wealth.”

James Henry, in a more detailed study, The Price of Offshore Revisited, done for the Tax Justice Network in 2012, estimates that the figure is closer to $21 to $32 trillion. Henry says Zucman vastly underestimates the role of developing countries and kleptocracy. He also notes the ommission of  offshore currency hoards, estimated at  $1.8 trillion. Henry also claims Zucman ignores estimates of private bank Assets Under Management -- now at least $13 trillion. Finally, Henry points out that Zucman ignores offshore nonfinancial assets like real estate, gold, precious metals, art, and ships, which is worth at least $10 trillion.

Henry plans to update his study  which will likely show even more wealth going to tax havens. Zucman also acknowledges that his figure does not include corporate tax avoidance, which is often done legally, taking advantage of all the loopholes and weak tax laws that allow them to do this. Zucman does estimate that corporations are depriving governments of a third of corporate tax revenues by employing tax haven based subsidiaries to shift profits and lower their tax bill.

Zucman’s book contains a few surprises regarding Canada’s connection with tax havens. He estimates that Canada’s offshore wealth is $300 billion as compared with the official Statistics Canada figure of $199 billion. The share of financial wealth held offshore by Canadians, he estimates is 9% of total wealth. This is much higher than the U.S. (at 4%) but comparable with Europe (at 10%). Zucman estimates Canadian tax revenue loss at $6 billion, which is a bit lower than my own estimate of $7.8 billion, but his global estimate of hidden wealth is on the low side as well.

1. Imposing financial and commercial sanctions against tax haven countries that refuse to end their facilitation of tax evasion. This could be done by imposing withholding taxes on interest and dividends paid to these countries or imposing trade tariffs.

2. Establishing a Global Financial Register that would record who owns all the financial securities, including stocks bonds and shares of mutual funds. Similar registers already exist but they are scattered and under the management of private companies. They just need to be combined and brought under public control.

3. Imposing a tax on capital, levied at the source. The tax collected could be counted as a credit towards the taxes they are required to pay, which would encourage tax compliance. To curb corporate tax avoidance, he proposes taxing corporations on their global profits, disregarding their artificial structure of subsidiaries, and apportioning the funds to governments according to the portion of sales, staff and capital assets in each country they operate. Canada and the U.S. already do this for provincial and state taxes.

I believe several other policy solutions need to be implemented. This includesa public register of beneficial owners and automatic tax information exchange.  Zucman’s proposals complement many of these that are under consideration. Thomas Piketty notes in the forward to his student, Zucman’s book that a Global Financial Register, in particular, would not only help to curb tax havens, it could facilitate taxing wealth, which could help to reverse the frightening growth in inequality, which he warned was undermining our global economy in his book, Capital in the Twenty-First Century.

I agree. The growth of tax havens is a problem not just because of loss of revenue, but because it facilitates growing inequality, which undermines our economic health and threatens democracy as well. Zucman’s book helps us understand the problem better, so that we  fix it.