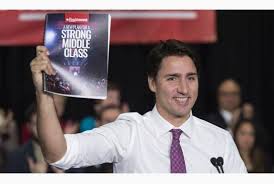 Justin Trudeau is fond of saying "Canada is back", and in some genuinely gratifying ways it seems to be the case. But by far the most important and substantive evidence for this claim is still missing: an indication that the new government is willing to seriously address the issue that a genuine return to normal rests upon. That issue is how do we recover from nearly 20 years of systematic looting of the national treasury through reckless tax cuts for high-income earners and large corporations?

Don't get me wrong. I feel the same relief as every other Canadian that public scientists can now speak their minds, that Stephen Harper's war-mongering is history, that we are overnight no longer a pariah on the world stage, that there is at least hope that Ottawa will take aboriginal concerns seriously and that ministers with a passion for their portfolios are more likely to deliver the goods.

But these are the low-hanging fruit of the "Canada is back" mantra, because none of these initiatives cost much money. The only commitment so far to address the enormous social and other deficits racked up over two decades is a modest tax increase for the highest income earners. Otherwise the cupboard is bare. And past Liberal governments, of course, helped make it so.

To reverse this ideological recklessness, Justin Trudeau will have to demonstrate an extraordinary challenge to his party's 20-year commitment to smaller government. On whether he even wants to -- and if he does, whether he is up to the task -- the jury is out. One thing is certain: without sustained public pressure Trudeau's Liberals will be content to administer the fiscal status quo they inherited from Harper.

Their first test is on the table right now. I am referring to a report produced by the group Canadians for Tax Fairness, or C4TF (disclosure: I am on the board), detailing the extensive damage done to the Canada Revenue Agency (CRA) by the Harper government. The report is unprecedented in that it was produced with the cooperation of 28 (current and recently retired) tax auditors, fraud investigators and managers of the CRA. According to C4TF, some of them had approached the group over recent years with revelations of Conservative changes that weakened the agency's ability to collect revenue owed to the government.

Detailed in the report are several allegations by the employees, including:

The CRA hit back at the allegations in the report, quoting high employee satisfaction surveys and identifying plans to increase "large audit" spending by 12 per cent.

In terms of lost revenue, the key finding in the report was the government's systematic gutting of the tax division responsible for investigating offshore tax havens and recovering the revenue lost to the resulting tax evasion and avoidance. C4TF estimates that there is at least $199 billion in Canadian wealth hidden in tax havens around the world, resulting in the loss of up to $10 billion in revenue every year.

The report calls on the Trudeau government to fundamentally change the CRA's priorities -- away from harassing charities, NGOs and ordinary taxpayers making errors and onto the wealthy and large corporations where the vast majority of revenue is lost.

The media, however, is not focusing on the billions in lost revenue and the damage done to the CRA detailed in the report, and instead is highlighting the issue of how the 28 CRA employees who gave information have allegedly violated the ethics rules that they agreed to as part of the oath of office they signed. There is whistleblower legislation, but it does not protect employees who openly criticize public policy.

The Ottawa Citizen quoted Donald Savoie, an expert in the area, calling on the government to investigate what he sees as a breach of ethics. It should have written and editorial calling for the government to fix the CRA.

There are some encouraging signs that the government might actually make the issue a priority, though it comes not from the economic ministries. Foreign Affairs Minister Stéphane Dion has made the most encouraging comments: "I'd like to address the global economy. It seems like each time we address the problem, like the circulation of funds, there are businesses using tax havens and they are doing things in our countries, but they don't pay tax. It's an enormous problem. Whenever [it comes up], I'm told, 'Well, that's up to the international level to resolve.' I'd like to see what Canada could do."

Dion is an influential minister and has the respect of Trudeau, but it will be Finance Minister Bill Morneau who will ultimately decide how much of a priority to make of the tax haven issue. He is clearly aware of it and under enormous pressure to find revenue that doesn't require actually raising taxes, stating: "We're going to work on this issue and other issues and through that work we would expect that we'll ensure that Canadians and Canadian businesses both large and small will pay their appropriate rate of tax."

Morneau has already changed Canada's position regarding corporate tax dodging. The practice of transnational corporations of transfer pricing and tax shifting -- shifting profits made in higher tax countries to low tax locations -- robs global governments of between $100 and $240 billion a year. The new government signed onto an international agreement negotiated by the OECD and the G20 called Base Erosion and Profit Shifting, aimed at forcing corporations to pay taxes in the countries where the profits are actually made. Canada ranks as the third largest loser in the G20 when it comes to the amount of untaxed corporate revenue.

The government's apparent willingness to go after tax cheats -- corporate and individual -- is good news. But this is just one step in terms of achieving tax justice and fairness, and in recovering the over $60 billion a year lost through tax cuts. Letting the need for a genuine national conversation about taxes slip to the back burner would be a mistake. Now that we have a government that says it believes in governing, the question of comprehensive progressive tax reform needs to be front and centre.