The 0.01% vs. the rest of us
[Article originally published in Canadian Dimension.]
{Graphs: research by DT Cochrane, style by Clement Nocos.}
14 December 2021
By DT Cochrane
While the one percent are obviously much richer than the average person, the disparity is even more stark when we look at the ultra-elite 0.01 percent.[1] A growing share of ultra-elite income is from capital gains. That makes elimination of the capital gains exclusion one important step in reducing inequality.
The figure above shows just how much higher ultra-elite incomes are than even other members of the one percent, let alone the rest of us.
In 2019, the top 0.01 percent—also known as the one percent of the one percent—collected an annual average $8.9 million, which is five times more than the next 0.9 percent and 20 times more than the remaining members of the one percent, not to mention 477 times the average income of the bottom 50 percent.
GETTING EVEN RICHER
In 2010, Occupy Wall Street popularized the slogan “We are the 99%” to confront the excess of wealth and power of the top-earning one percent. Unfortunately, those at the top continue to grab an oversized share of incomes and wealth, both in Canada and globally. Between 2010 and 2019, the top one percent added almost $140,000 to their average incomes, while the ultra-elite 0.01 percent enjoyed an increase of $2.9 million.
Over the same time period, the average income of the bottom 50 percent rose by a relatively paltry $4,700. That means the increased income going to one person in the 0.01 percent was equal to the increase shared by over 600 people in the bottom 50 percent.
ALL ABOUT THE CAPITAL GAINS
Total income includes realized capital gains, which come from selling assets for more than their purchase price. Capital gains are much more unequally distributed than other forms of income. The chart below shows the share of realized capital gains going to groups across the income distribution. 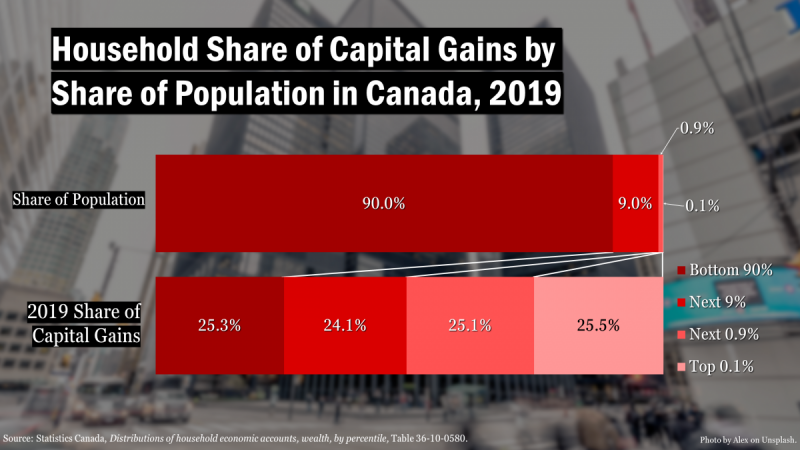 About one-quarter of realized capital gains goes to each of these groups. That means the 28.8 thousand people in the top 0.1 percent—a share of the population too small to see on the chart—get as much as the 25.9 million people in the bottom 90 percent.
Capital gains comprise a growing share of the ultra-elite’s income. As seen in the table below, more than half of the increase in average income for both the top 0.01 percent and the next 0.09 percent was from realized capital gains.

Capital gains are much more volatile than other types of income. However, there is a clear trend in the capital gains share of income for the ultra elite. Through the 1990s, realized capital gains were less than 13 percent of the ultra-elite’s total income. Since the early 2000s, that share has risen markedly. In 2019, the capital gains share reached 28 percent, the second-highest recorded level.
It bears emphasizing that these are only realized capital gains from the sale of assets. Most capital gains are unrealized, meaning an asset has not been liquidated to collect the increase in value. Unrealized capital gains still increase the wealth of asset owners. Canadian taxpayers reported total realized capital gains of $63 billion in 2019. But the value of all household assets increased by $911 billion.
TAXES CAN REDUCE INEQUALITY
Our progressive income tax system reduces inequality. However, in 2019 the 0.01 percent were able to pay a lower effective tax rate on reported income than the rest of the top percentile: 30 percent vs. 31 percent.
This inversion at the extreme top end is possible for at least three reasons: 1) insufficient upper tax brackets, 2) the growing share of capital gains within elite incomes, and 3) the increasing use of sophisticated tax planning schemes.
In 2019, Canada’s top marginal tax bracket applied to all income above $210,371.[2] Adding another tax bracket at $750,000—the approximate threshold of the 0.1 percent—could bring in $1 billion or more in additional government revenue while also reducing inequality. An additional bracket at $2.5 million, which would cover the 0.01 percent, would go even further.
Income from realized capital gains are given preferential treatment relative to labour income. Half of capital gains are automatically exempt from taxation. This means that increasing the portion of elite income that comes from capital gains serves as an effective tax cut for the rich.
At the same time, the ultra-elite have the greatest incentive and ability to hire costly lawyers, accountants, and other specialists to help them side-step tax responsibilities. The loopholes that governments create, or refuse to close, really only benefit a tiny portion of the population.
DOES INCOME INEQUALITY REALLY MATTER?
Those that dismiss concerns about income inequality claim that relative income does not matter. These folks argue that we only need to worry about absolute deprivation. Tellingly, those making these arguments are rarely found working to reduce poverty, hunger, homelessness, and other features of deprivation.
While it is obviously important to make sure everyone has their basic needs met, relative incomes still matter. Here’s why:
First, everyone deserves to share in the diverse surplus of goods and services that our society produces, including experiences of luxury.
Second, relative income is a strong determinant of relative health outcomes. Richer people generally live longer, healthier lives than poorer people.
Third, there is evidence that inequality is not just bad for the masses at the bottom of the hierarchy; it is also bad for those at the top. Studies show that empathy tends to decrease as people grow richer.
Fourth, inequality is undermining our efforts to combat climate change. As the recently released World Inequality Report shows, the wealthiest residents of Canada not only have much higher carbon emissions, they have increased their emissions at the same time as the majority of Canadians have reduced theirs.
Fifth, high inequality harms our democratic institutions. People with high incomes have more ability to participate in our political processes. This goes beyond money. Those with high enough incomes can afford to devote more time to the causes that concern them, such as preserving their own privileged positions.
Most importantly, more inequality undermines social cohesion. During the pandemic, we were often told that we’re all in it together. But when some people grab so much more of the pie, it is hard to feel like that is true.
D.T. Cochrane is an economist and policy researcher with Canadians for Tax Fairness. D.T. has lived in Ontario for more than 20 years, but still considers himself a Saskatchewanian at heart.
NOTES:
[1] Income data comes from Statistics Canada Table 11100055. Household wealth data comes from Statistics Canada Table 36100580.
[2] In 2021, the threshold for the top bracket is $216,511.