The three major national parties—Liberals, Conservatives, and New Democrats—have released the projected revenues and expenditures of their election promises. The Parliamentary Budget Office (PBO) has also released its estimates for many of those promises.

By all accounts, the ambition of the NDP plan far outstrips that of the LPC or the CPC.

The NDP plans to spend 2.5 times more than the Liberals, and 3.5 times more than the Conservatives, while also having the lowest projected deficit. This is possible because the party plans to confront economic inequality with significant revenue generating measures.[1] The unwillingness of the Liberals and Conservatives to confront economic inequality is tied to their inability to offer ambitious new programs.

All three parties promise similar total deficits over the next five years, as seen in the chart below.

For decades, the federal deficit and debt were major concerns that produced reams of panicky commentary from mainstream pundits. Thankfully, that has changed as those concerns were largely misplaced and were used to justify socially harmful austerity.

During the election, the Conservatives have made some half-hearted efforts to reinvigorate deficit fearmongering. However, they plan to run cumulative deficits that are less than 0.5 percent lower than the Liberals. In the 2021/22 fiscal year, the Conservatives’ planned deficit is actually 11 percent higher.

The NDP’s plan would create the least new debt among the three parties. The party’s deficit figure is made higher by a 10 percent reduction in estimated revenues, which is meant to account for uncertainty. Neither the Liberals nor the Conservatives made similarly cautious reductions. Absent this adjustment, the NDP’s cumulative deficit would be eight percent lower than that of both other parties.

While the total new debt for the three parties is within a few percent of each other, their planned new expenditures and revenues are dramatically different, as seen in the next chart. 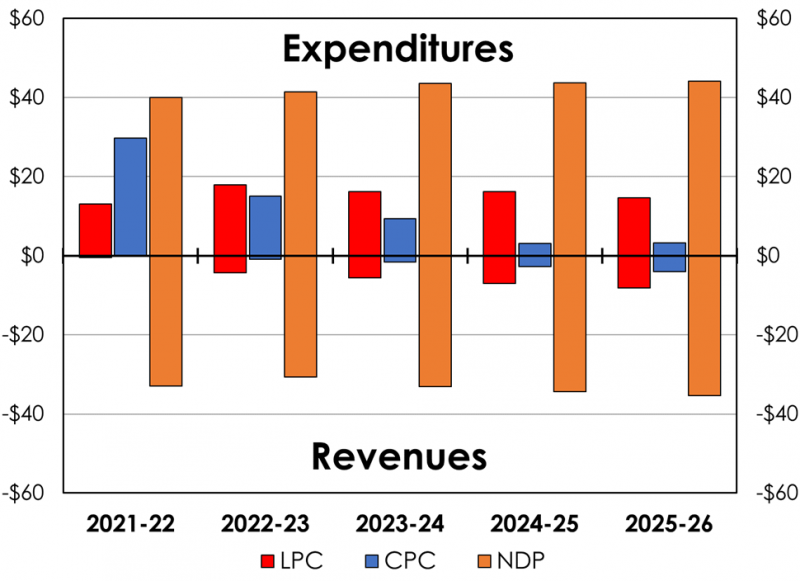 Following the convention of the PBO, expenditures are shown as positive values, while revenues are negative.

These differences are consequential in numerous ways. First, the NDP’s spending plan will immediately help the beneficiaries of new and expanded programs. Second, that spending will inject money into the economy. Third, their revenue plans will reduce economic inequality and lower the interest paid to wealthy bondholders.

In the 2021/22 fiscal year, both the LPC and the CPC plan to have little new revenue. While the Liberals offered tax measures with the appearance of tax fairness, such as their temporary tax on financial companies, these would produce little additional revenue.

Meanwhile, the NDP plans to raise an extra $33 billion in the first fiscal year, which is billions more than the other two parties plan to raise over five years.[2]

While many common concerns about federal deficits and debt are based on misunderstandings of government finance, one legitimate concern is the payment of interest.

Government securities—like all assets—are disproportionately owned by the wealthiest households, and the biggest financial institutions. Interest payments largely go to those groups, exacerbating inequality. Due to persistently low interest rates, payments on the federal debt are a much lower share of total spending than in previous years. However, those payments still send tens of billions of dollars to bondholders.

The PBO estimates that the interest rate on government debt will rise over the next five years. That means each party’s addition to the debt will cause an incremental increase in interest payments. The estimated incremental interest costs over the next five years for the Liberals, Conservatives, and New Democrats are $2.7 billion, $2.4 billion, and $1.6 billion, respectively (the NDP figure is based on its lower revenue estimate). A sizable portion of that would end up with the wealthiest Canadians.

Revenues and expenditures matter most

The NDP’s ambitious revenue-generating measures would bring in money primarily from the wealthiest Canadians. The party’s proposed wealth tax would generate about one-third of the estimated revenue. Another one-quarter would come from increasing the capital gains inclusion rate, while increasing the corporate income tax rate would be responsible for 14 percent of the new revenue. All of these would reduce the amount of wealth controlled by the rich and bring down inequality from the top-end.

On the expenditure side, the four biggest line items in the NDP plan are:

The benefits of all these measures would be delivered primarily to those at the lower end of Canada’s economic ladder. Conversely, the CPC’s four biggest planned expenditures would primarily benefit business. The childcare plan introduced in the budget is by far the LPC’s largest planned expenditure. However, the Liberals’ ambition drops off significantly from there.

Government spending multiplies in the economy

Money spent by government not only provides goods and services for beneficiaries, but it also becomes income for individuals, businesses, and other organizations. The money will either continue to circulate if spent or become an asset if saved. Continued circulation provokes economic growth, which economists describe as the ‘multiplier effect.’

The NDP’s top four measures will directly benefit people with lower incomes while adding $106 billion into the economy. Conversely, the top four measures of the Conservatives would add just $55 billion, and just $47 billion from the Liberals.

As money circulates, portions will be syphoned off as interest and profit, which will primarily accumulate with the wealthy. The planned revenue measures of the NDP will keep the money moving. The measures will draw money out of the oversized asset pools of those at the top, and put it back into the economy in ways that benefit those at the bottom. Tax fairness makes this possible.

There is much economic uncertainty as the country uneasily exits the pandemic. That uncertainty is compounded by the climate crisis. Now is not the time for governments to be timid. Now is the time for the federal government to lead.

The NDP’s promises are the only ones that approach the necessary scale of action.

D.T. Cochrane is an economist and policy researcher with Canadians for Tax Fairness. D.T. has lived in Ontario for more than 20 years, but still considers himself a Saskatchewanian at heart.