“Canada is a country with high levels of inequality.”
This is the frank assessment of the World Inequality Lab, most prominently associated with economist Thomas Piketty. The assessment can be found in the lab’s World Inequality Report 2022, which looks at the global distribution of income and wealth.
Those high levels of inequality have consequences for the climate crisis. The report found that since 1990, Canada has achieved a modest decrease of 3.1 tonnes of carbon per person. However, while the bottom 90% reduced their emissions by 4 tonnes per person, the Top 10% increased their emissions by 4 tonnes per person!

DOES EVERYONE EARN THEIR INCOME?
According to the report’s authors, “the richest 10% of the global population currently takes 52% of global income, whereas the poorest half of the population earns 8.5% of it” (emphasis added). The words used in this sentence are telling.
These differences in income are not because the richest 10% work more or work harder than the rest of us. In fact, it is quite the opposite.
Income, as measured by the researchers, comes from both labour and investment. Unfortunately, the report does not tell us the proportion of income that the richest 10% or the rest of us get from investment as opposed to labour. . However, the distribution of wealth gives us a clue. 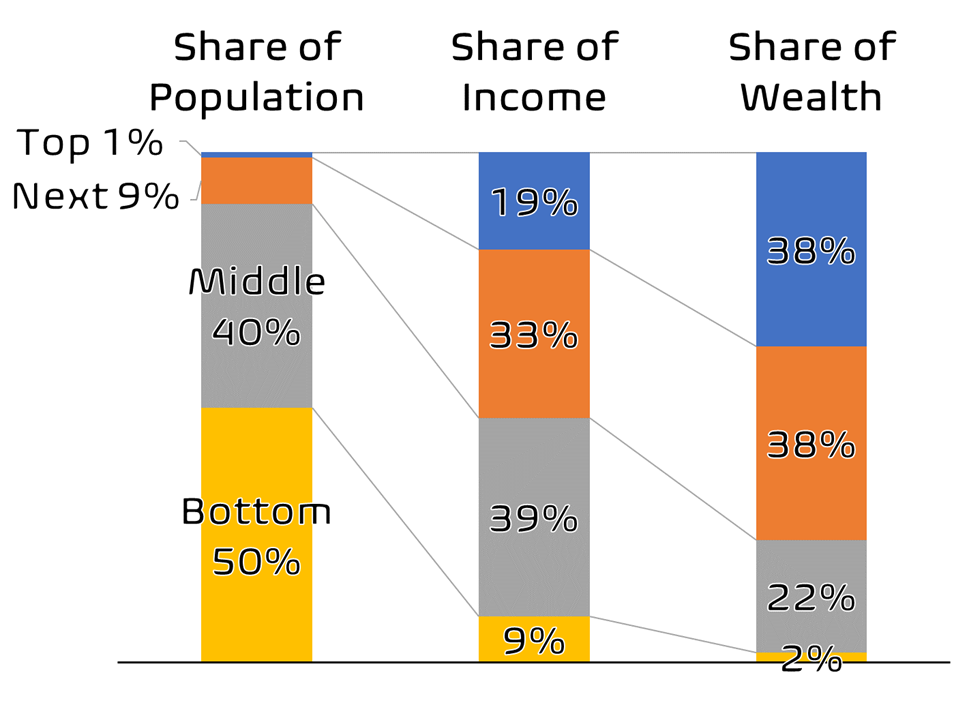 The figure above shows each groups’ share of the population, share of income, and share of wealth. The richest 10% is separated into the Top 1% and the Next 9%.
As we can see, while the Global 1% collects about one-fifth of all income, it owns almost two-fifths of all wealth. We can conservatively estimate that it also takes two-fifths of investment income.[1] That means more of the income going to the Bottom Half is coming from labour.

ARE THE GLOBAL RICH GETTING RICHER?
The answer to this question depends on who we consider to be “the rich” and whether we are talking about income or wealth: it’s the ultra rich—the 0.01%—who are getting far wealthier.
The income share of the richest 10% has declined slightly since hitting an all-time high of more than 60% in 2000.
Meanwhile, the share of wealth owned by the Global 0.01% increased by more than half between 1995 and 2021. Further, the wealth share of the ultra-ultra-rich has jumped dramatically in the last year.

WHAT ABOUT CANADA?
The World Inequality Lab’s findings on global wealth are consistent with what Canadians for Tax Fairness has also reported on: only the top 1% in Canada increased their share of total wealth over the past decade, while the share of all other groups remained the same or shrank.
The report’s authors found that the Top 1% of Canadians are taking 15% of the country’s income, while owning 25% of the wealth. The authors note that income inequality in Canada declined after World War II thanks to capital controls and social policies, but that it has risen significantly since the 1980s.
The report confirmed similar findings that use different data sources and methods of analysis, including the banking giant Credit Suisse and Canada’s Parliamentary Budget Office. Canada is not exempt or immune from the global crisis of inequality.
Inequality harms our societies in many ways, including by disproportionately worsening the climate crisis. The World Inequality Report demonstrates that the wealthy are holding back our efforts to reduce emissions and combat climate change.

WHAT SHOULD WE DO?
A progressive wealth tax is the number one suggestion for reducing inequality found in the World Inequality Report. The authors note that “most countries in the world already tax individual wealth with property and inheritance taxes.” Canada is not one of the countries with an inheritance tax. That means our only form of wealth tax is on property, which comprises the vast majority of wealth for the bottom 90%. Because property taxes are flat—the same percent regardless of property value—they end up being regressive relative to income and total wealth.
In addition to a wealth tax, C4TF calls for the government to eliminate the capital gains exclusion. While 100% of income earned through labour is eligible to be taxed, only half of income collected from selling assets at a gain is subject to tax. The benefits of this legal sidestep of taxes overwhelmingly go to the wealthiest Canadians.
Finally, we need to close down the use of tax havens. Only the very wealthy are able to take advantage of low tax jurisdictions. In the process, money that would have gone into public coffers ends up making the rich even richer.

NOTE
[1] There are many reasons why the wealthiest individuals capture more investment income than their share of wealth. First, this only includes realized capital gains from asset sales. The primary asset of most people is their house, which does not provide any direct income. Dividend and interest paying assets are even more disproportionately owned by the wealthy. Second, the wealthy are able to use more sophisticated asset management strategies designed to improve their returns. That would include standard practices of portfolio diversification, as well as methods of tax avoidance.