LETTER FROM EXECUTIVE DIRECTOR TOBY SANGER
I started as executive director of Canadians for Tax Fairness in the fall of 2018. It’s been a busy and exciting time—and the coming year promises to be a pivotal year for tax fairness, with the federal election and the potential for significant international tax reform. In its first seven years, Canadians for Tax Fairness (C4TF) has very successfully put issues of tax fairness on the political agenda. This is thanks to the leadership of former executive director Dennis Howlett and our other talented and hardworking staff, the commitment of our board, collaboration with allies, and the activism of our thousands of supporters. And of course, none of it would be possible without the generous support of funders, big and small.
In advocating for fairer taxes from the wealthy and corporations, we’re up against those with much deeper pockets and wealthier backers, such as the Canadian Taxpayers Federation, which has an annual budget more than 20 times ours. Yet despite our small size, we’ve had an outsized influence. In a classified memo, the federal finance department listed Canadians for Tax Fairness at the top of their list of influential stakeholders on tax fairness issues.  But we’ve got big challenges ahead. Alberta Premier Jason Kenney is planning to cut Alberta’s general corporate tax rate by a third, to 8%, which will cost the province over $1.5 billion a year in revenues. Doug Ford is also planning to cut corporate tax rates in Ontario. Both these Premiers are cutting hundreds of millions from important public services to finance tax cuts for large profitable corporations. We’ve made strong arguments why this is a bad idea, and why corporate tax cuts won’t trickle down, but we need to fight back and amplify these points.
The federal election this year is a once-every-four-year chance to establish another mandate for the federal government. Taxation will be a major issue in the election campaign, with clear differences between political parties already apparent. We’re prepared with a tax fairness platform that shows how the federal government could generate many billions more annually by making the tax system fairer and simpler—but we’re going to need help to get these messages out.
We’ll also continue to be very active at the international level because these rules have a big impact on what individual nations including Canada can do. We have an extraordinary opportunity over the next year to reform the international corporate tax system, which was recently described by the head of the International Monetary Fund (IMF) as “fundamentally out of date”.
The far-reaching reform proposals we’ve advocated with our tax justice allies are now being very seriously considered by the IMF, the Organization for Economic Development (OECD) and major nations. At stake is the estimated US$650 billion in annual revenues that nations lose from large corporations shifting their profits to tax havens and low tax jurisdictions.
There will be a fight back, but we’ve never been this close to comprehensive international tax reform and we’re going to need to push hard to achieve it.
Thank you very much for your support.
Toby Sanger, Executive Director

CAMPAIGN: LEVEL THE DIGITAL PLAYING FIELD
Your local bookstore or video store—if you still have one—probably paid more corporate taxes in Canada than Facebook, Amazon, Netflix or Google did, despite being some of the largest and most profitable companies in the world.  These foreign digital giants can easily exploit Canadian and international tax rules to minimize their taxes, both in Canada and around the world.
This tax preference for foreign internet giants hurts us twice over, by depriving our governments of hundreds of millions in revenues, and by undermining Canadian producers. Digital services are no longer a niche area and now also include billions spent by Canadians on advertising through Google, Facebook and others, and any service sold through an international e-commerce platform, such as Uber or Lyft rides, lodging through AirBnB and much more.
As the dramatic shift to online advertising puts more money into the pockets of these giants, Canada’s struggling print and traditional media sector continues to lose revenue to powerful multinationals that have a made-in-Canada tax advantage over domestic producers, and generate no original content, instead taking it from the same media producers that they’re also taking advertising dollars from. As a result we’ve seen thousands of jobs lost, dozens of outlets closed in the media sector, and many businesses in other sectors also struggling.
C4TF has campaigned with other allies to level the digital playing field so Canadian producers can remain competitive and we can maintain a vibrant media and culture sector. We’ve published opinion pieces in major papers, lobbied politicians and senior government officials, and conducted public campaigns. Quebec became the first province in Canada this year to introduce a sales tax on digital companies such as Netflix and Amazon, followed by Saskatchewan. Quebec now estimates its revenues from these measures will be double their initial expectations.
This isn’t just a Canadian problem: the OECD identified taxation of the digital economy as the top priority in its BEPS action plan in 2013. Since then, the overwhelming number of OECD and G20 countries have taken action in different ways on this issue, but regrettably the Canadian government is one of the very few that haven’t.
But there’s good potential for progress this coming year. The House of Commons Trade Committee took our advice and urged the federal government to tax foreign e-commerce companies. The Auditor-General also recently took the federal government to task for not acting on this issue.

OTHER ISSUES WE’VE BEEN WORKING ON
Corporations, pay your fair share!
This coming year we are launching another priority campaign  - getting corporations to pay their fair share of taxes. Canada’s nominal corporate tax rate is about half what individuals pay, which contributes to income shifting and tax avoidance, while many corporations pay far less. Steep cuts to corporate tax rates over the past two decades haven’t led to higher business investment; on the contrary, investment rates have declined, while corporate profits and cash surpluses have surpassed record levels and rates. Yet the governments of Ontario and Alberta are planning to cut corporate tax rates further. We’re going to fight back, exposing how little major corporations pay and how ineffective corporate tax cuts have been.
Progressive environmental and carbon taxes
Climate change is advancing at an alarming rate. Now, more than ever, we need strong policy solutions that come down hard on large polluters while assisting vulnerable populations to transition to a more sustainable economy. Canadians for Tax Fairness has long advocated for a progressive carbon tax. We were encouraged to see the federal government adopt a system largely consistent with our recommendations for households, with a large majority of households better off after receiving the carbon tax rebate. However, the federal carbon tax system is light on large emitters and needs to be significantly strengthened. Carbon taxes are only a small part of the solution. We need a wide range of measures to address the problem. Canada needs to stop subsidizing the fossil fuel industry and make bigger investments in green technologies, infrastructure and employment, and in a just transition.
Gender tax justice
While the federal government has put a lot of emphasis on gender equality, until recently it hasn’t addressed the tax side of this. Most tax loopholes provide much larger benefits to men than to women. We’re collaborating with Inter Pares and international gender tax expert and Queens Law professor Kathleen Lahey on a SSHRC-funded project on gender tax justice in developing countries. Our partner, the Global Alliance for Tax Justice, is also putting a major priority on gender tax justice.
Tax fairness for low and middle incomes and working families
While our major emphasis has been on pushing for the affluent and corporations to pay their fair share of tax, we also advocate for more progressive tax measures for lower and middle incomes. But progressive tax policies and tax benefits don’t do any good if those entitled to these benefits don’t receive them—and many don’t. We’ve pushed for the CRA to make tax filing easier and simpler, including introducing pre-filled tax forms. This would make tax filing easier and more accessible for most of us, saving Canadians millions of hours and billions of dollars that they spend on filing their taxes, while helping everyone receive the important benefits and credits that they need.
Paying for Pharmacare
A national pharmacare program, what it would look like and how to pay for it, will be an issue in the coming election. C4TF executive director, Toby Sanger and David Macdonald of the Canadian Centre for Policy Alternatives, published a report that analyzes different options of paying for a national program and how it would affect different households.  A Prescription for savings outlines how progressive funding options would leave a large majority of Canadian households better off.
GOODBYE TO C4TF STAFF
On behalf of all staff and board members, both past and present, we would like to thank our former executive director, Dennis Howlett, for all the work he did establishing Canadians for Tax Fairness as a recognized and credible voice for tax justice, and for his ongoing commitment and contributions. Even in retirement, he continues to campaign for fairer taxes through his involvement with the Global Alliance for Tax Justice and in many other areas.
Last year we also said goodbye to Diana Gibson, our former communications director, who also contributed much in research and policy depth. Diana was responsible for our 2017 report, Bay Street and Tax Havens, the organization of the Canadian Coalition for Tax Fairness to counter anti-tax business lobbyists, and the research and writing of numerous media materials, from fact sheets and blogs to op-eds, breaking down complicated tax policy into accessible messages for the media and public.
Thank you for your expertise and dedication in spreading the tax fairness movement and engaging Canadians far and wide. 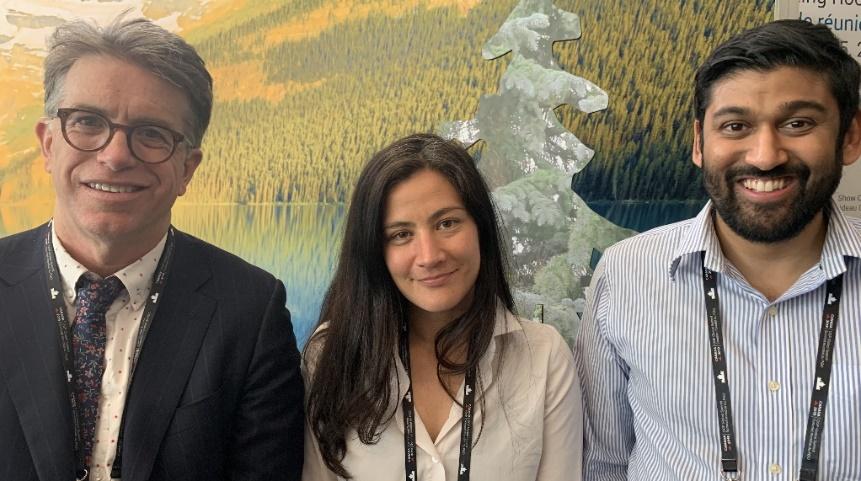