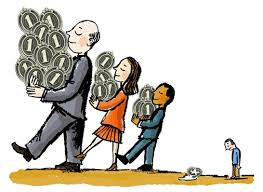 The government's fall fiscal update has some good news for those living in poverty or who are struggling to get ahead. The Child Tax Benefit will be indexed to inflation and the Working Income Tax Benefit will be increased by $500 million, both moves the Canadians for Tax Fairness and other social justice groups have been calling for. However, while these are important poverty reduction measures, they only address growing inequality at the bottom.

Inequality needs to be tackled at both the top and bottom end of the income divide. The government's back-tracking on reforming the private corporation tax breaks and stock options deductions means they are not doing much to curb incomes at the top end, which are growing at a fast rate. While curbing income sprinkling is a step forward, an overly-generous cap on passive investments and caving on its attempt to set limits on converting income to capital gains will not result in much new revenue. And lowering the small business rate further to nine per cent will more than cancel out any gains on private corporation tax reform.

A major reason why the rich are getting richer is because so many of the unfair tax breaks governments have doled out in the past few decades have disproportionately benefited the rich. A recent Canadian Centre for Policy Alternatives report found that the richest 10 per cent, on average, get a discount of more than $20,000 a year on their taxes from tax loopholes — an increase of $6000 since 1992.

The result is that in 2015, the effective tax rate on the top 10 per cent of families (income tax as a percentage of total income) was only 21.8 per cent. This is quite a bit lower than the over-50-per-cent combined federal and provincial top income tax rate (depending on the province) that everybody thinks the rich pay.

A major reason why the rich are getting richer is because so many of the unfair tax breaks governments have doled out in the past few decades have disproportionately benefited the rich.

Raising income taxes on the highest-income Canadians, as the Liberal government did in 2016, doesn't have that much effect when there are so many tax loopholes available to avoid paying what they should be paying.

Inequality is a rock that is weighing down our economic growth because it weakens consumer demand, as the rich don't spend as much of their income as middle- and lower-income Canadians do. The International Monetary Fund recommends stronger action be taken to redistribute wealth in order to grow the economy.

Canada is doing poorly at tackling inequality on both ends — we rank 28th out of 30 developed countries for the redistributive effects of our tax and transfer system.

Canada is a laggard when it comes to social spending. At 17.2 per cent of GDP, our social spending rate is well below the OECD average of 21 per cent. For comparison France spent 31.5 per cent, Finland 30.8 per cent and Belgium 29 per cent.

If Canada was meeting just the OECD average, there would be more than $61 billion more for social spending, according to OECD numbers.

The anti-tax zealots would have you believe that taxes take money out of the economy. But the truth is that social spending is good for our economy when it is productively invested in social and physical infrastructure such as daycare or public transit. In the January 2017 Monetary Policy Report, the Bank of Canada applauded the stimulus effect of the child tax benefit; it boosted consumer spending and contributed to more robust economic growth. Low-income Canadians have a much better record for stimulating consumer demand than the wealthy.

In fact, boosting the CCTB and WITB will probably do more to help small businesses by increasing consumer demand for their goods and services than the further reduction in the small business tax rate.

On the tax side we need to be much more aggressive as well. Canada ranked 25th out of 35 OECD countries in terms of the tax revenue as a share of GDP in 2015. Corporate taxes in particular have been declining, shifting the burden onto middle-class workers. The recent small business tax cuts took that trend $1.2 billion in the absolute wrong direction, according to the PBO Ready Reckoner guide. Small businesses are now paying half the taxes they paid in 2000 and there has not been parallel employment growth in that sector to show for it.

Tackling inequality will need more than baby steps. Bolder action is needed both at the top and the bottom. The government needs to adopt a comprehensive poverty reduction plan aimed at eliminating poverty and it needs to properly consult and implement a comprehensive tax reform to achieve tax fairness and raise more revenue to be able to properly fund its anti-poverty initiatives.