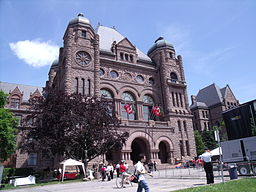 Government budgets generally fail to impress me. No doubt this is the result of decades as an anti-poverty and fair tax advocate. But Ontario's proposed budget - the document that spurred an election and ended the leadership career of at least one politician - is different. It contains several items that are definitely steps in the right direction.

Empowered by majority government status and an election win where voters chose her platform of government investment over tax and spending cuts, Premier Kathleen Wynne has proposed tax measures that would boost provincial revenues by $1billion.

In another long overdue shift towards common sense, the plainly-named "small business tax reduction" will no longer be available to large corporations. There are also plans to increase the tax on aviation fuel, hike the tobacco tax, and several other changes that are expected to add $350 million for a total of approximately $1billion in additional revenue.

For years now, Ontario governments (both Liberal and Progressive Conservative) have been inflicting austerity policies while failing to comprehensively collect revenue from large corporations and the wealthy. This sloppy fiscal management persisted - long after it was obvious that it just doesn't work.

Cuts to public services have caused a lot of pain and not much gain in terms of reducing deficits. Those cuts also boosted unemployment, slowed economic recovery and reduced tax revenue.

We can no longer afford the steep price tag that comes with avoiding revenue side solutions. Governments need to be clear about the real costs of tax cuts and loopholes.

Ontario needs investment in areas like public transit, health care, poverty reduction and pensions. In addition, it is critical than there be a plan to offset these spending increases and keep deficit reduction on target as well.

The deficit doesn't pose a problem if interest rates stay low and the economy continues to grow. In that scenario, growth would continue to shrink the debt to GDP ratio.

But it is prudent to consider that interest rates may go up in the next few years. This could sharply limit the cash available to continue Ontario's investment in services and communities. That is why the deficit needs to be reduced, though it could probably be done over a longer time than is proposed in the budget. But the recent practice of relying solely on austerity and cutbacks to achieve this is not a solution. It boosts unemployment, hurts economic growth and reduces the quality of public services.

So how do you stop this vicious cycle?

Restoring the corporate tax rate would be a good start. When Ontario began cutting that rate in 2010 it was based on an idea that companies would use the savings for job creation and to develop new markets and products.

That has not panned out. Instead Canadian corporations are sitting on $600 billion of hoarded cash that benefits very few. Still, the reduced tax rate persists. It is a very expensive failed experiment.

To put this in perspective, successive tax cuts beginning with the Mike Harris years means Ontario now has $19 billion less revenue annually. Ontario is one of the lowest taxed provinces in Canada. Revenue side solutions are a much better option.

Recent public opinion polls have shown that people are willing to pay more in taxes for public transit fixes to traffic congestion, improvements to health care, education and other public services.

After so much tax cutting, Ontario kick starting a $1 billion reversal is a pretty small step. But it is a step in the right direction. But further steps in this direction are needed in the next budget, including possibly some modest but broader income tax increases.

There's a caveat though.

Boosting taxes on the rich and on corporations will not result in more revenue if governments don't close tax loopholes and take stronger measures to go after tax cheats. On this front too, though there were some encouraging words in the Ontario budget:
"Reducing corporate tax avoidance and closing tax loopholes is a priority for the Ontario government. The government supports the principle that everyone should pay their fair share of taxes, including corporations."

Word is that Ontario government will be pushing the federal government and the Canada Revenue Agency to step up their efforts. This is welcome news. Each and every Canadian province loses revenue from corporate tax avoidance schemes that take advantage of tax loopholes and offshore tax havens. It is time for a strong stand by all provinces at the premiers meeting scheduled for August. They can no longer avoid tackling what has become a chronic problem.