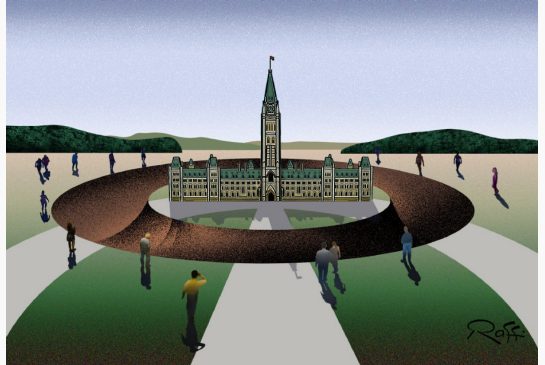 The federal government is shrinking. Relative to the size of our economy, it is slated to hit lows not seen since the 1940s.

Several conservative pundits have described this as Stephen Harper’s most important and enduring contribution. For decades now, we have heard that government is the problem and that less government — and tax cuts — must be the solution, the path to prosperity and personal freedom. And with surging distrust of government, the argument has great political appeal. But the pursuit of smaller government is never just about size; it’s inevitably also about the state’s purpose.

When the Conservatives came to power, they inherited a $14-billion surplus — the 10th consecutive federal surplus. The former Liberal government had also implemented the largest tax cut in Canadian history. Clearly there was no great fiscal crisis. Nevertheless, the Conservatives started laying the tracks for smaller government. The centrepiece: the cut in GST taking $14 billion out of the federal treasury, roughly equivalent to the inherited surplus. Corporate taxes were sharply reduced and income taxes were cut. Federal revenues relative to the size of the economy are now at their lowest point in many decades.

Whatever their benefits, tax cuts have costs. The major consequence — arguably their purpose — is pressure to cut government to fit shrunken revenues. Notwithstanding a reluctant burst of spending in response to the 2008 meltdown, that is exactly what the government delivered: slow-motion self-fulfilling austerity.

Yes, the cuts imposed in the 1990s were deeper and undoubtedly had painful and enduring consequences. But circumstances were different, fiscal crisis was undeniable, interest rates were higher, and cutting was treated as a necessary but temporary evil, witness the increase in social and infrastructure spending once the budget was balanced.

Today’s austerity is not a response to fiscal crisis. The 2012 budget demonstrated that it’s about redefining the purpose of government, about dismantling, brick by brick, the progressive state built by governments of quite different stripes in the decades following the Second World War. Implied is a very different notion of our shared citizenship, of what binds us together across language, region and community. The message was clear: government will ask less of Canadians and Canadians should expect less from government, a kind of bargain-basement citizenship.

We see this in the extent to which cuts target services for the most vulnerable: refugee claimants cannot get medical care; migrant workers cannot access benefits they’ve paid into; prisoners lose the meagre wages that might have helped them reintegrate when released; the unemployed have less access to employment insurance; veterans have less access to essential services. We lag in tackling inequality and poverty.

We see this in the retreat from federal engagement with the provinces. Gone are the days of co-operative federalism, yes, often messy and combative, that nonetheless brought us pensions and Medicare. The tone was set when, among its first steps, the government cancelled the child care agreements signed with every province and the Kelowna Accord signed by the premiers and aboriginal leaders.

How did all of this get done without much political pushback or public outrage? In some cases, the cuts don’t kick in for years. In other cases — the gutting of our environmental regulations, cuts to basic science and statistics, weakened enforcement of health and safety regulations — the consequences are often subtle and play out in the long term or when things go wrong, and by then we may not make the link to austerity. In fact, our collective failures may simply undermine our trust in what government can accomplish.

Austerity creates a cycle of erosion and distrust. As public services are squeezed, we get less, we wait longer, we pay more out of pocket, we get angry with government and, ironically, become less willing to pay the taxes that would stop this erosion. Why pay or even vote if government is not there for us.

Our government is — gradually to be sure — returning to a narrower prewar vision of its role, focusing on the protection of life, liberty and property: getting tough on crime and terrorism has taken centre stage, the recent counterterrorism legislation a major step in this shift from progressive to surveillance state.

Reversing course will not be easy. Fear of bad things and bad people obscures our choices. No politician wants to be seen as soft on crime or terrorism. And raising taxes continues to be largely a political no-go zone even if cracks are appearing. The debate we need is not about size. Nobody is arguing for more government or higher taxes for their own sake. Everybody agrees that we should be eliminating waste and politicized spending, improving efficiency, enhancing openness, spending wisely. The debate we need is precisely about what those wise choices are, about what and whom government is for and whether we are willing to pay the price for the Canada we want.

Alex Himelfarb is a former clerk of the privy council. He is the co-editor of the book Tax Is Not a Four-Letter Word. and  on the National Advisory Committee of  Canadians for Tax Fairness.

This piece originally appeared in the Toronto Star.