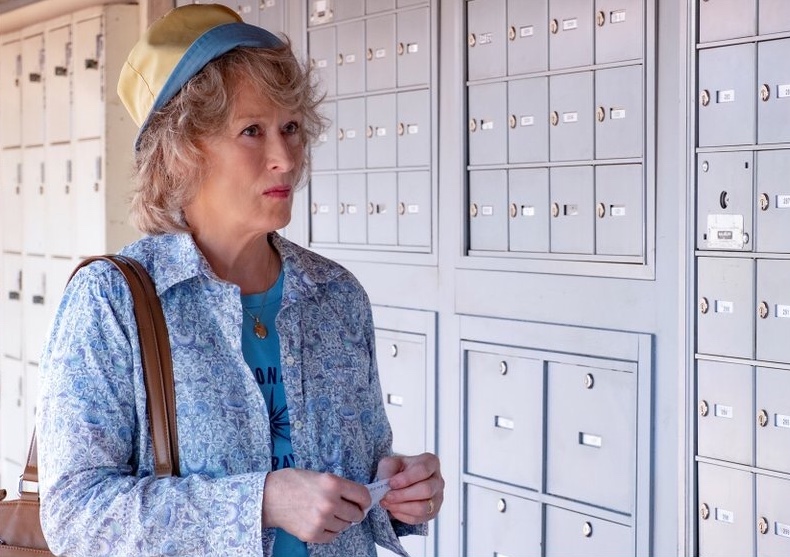 To keep our supporters informed and connected, we send a newsletter with highlights of recent progressive tax developments in Canada and around the world. You can sign up to receive our newsletter here. Note: We've reduced the frequency of our weekly newsletter due to the summer news schedule but expect to hear from us as we continue campaigning for tax fairness over the coming months in a leadup to the federal election this fall. Here is this week's roundup of tax fairness news:

Photo: Actress Meryl Streep stars in The Laundromat, a movie about the Panama Papers investigation.

Grab the popcorn. The story of how an international team of journalists uncovered the Panama Papers is coming to the big screen with its North American premiere at the Toronto International Film Festival.

Meryl Streep, Gary Oldman and Antonio Banderas star in The Laundromat, a Hollywood retelling of the investigation into millions of leaked documents related to offshore tax avoidance. Directed by Steven Soderbergh, the movie premieres at the Venice Film Festival in August and debuts in North America at TIFF on Sept 9.

The Laundromat is the first major motion picture to explore the Panama Papers and an opportunity to broaden awareness about the need for governments to address global tax dodging. 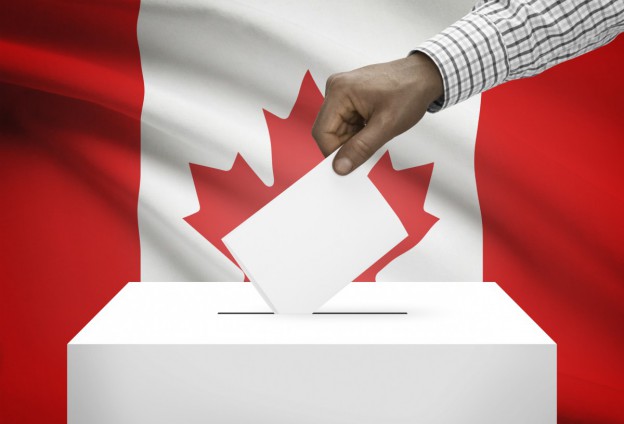 Have you voted for tax fairness yet?

In case you missed our earlier email, Canadians for Tax Fairness is asking supporters to tell us which tax fairness measures they would like to see promoted this federal election. Please pick up to five priorities such as closing tax loopholes, increasing corporate transparency, or strengthening penalties for offshore tax avoidance. This feedback will help focus our campaign efforts on the issues that matter most to supporters. Have we missed a tax fairness measure that should be promoted? Let us know.

The ICIJ’s most recent investigation focused on the tax haven of Mauritius. ICIJ illustration

Hundreds of thousands of leaked files have unearthed large-scale international tax avoidance through the small island of Mauritius. The documents were obtained by the International Consortium of Investigative Journalists, which previously broke the Panama and Paradise Papers and the Luxembourg Leaks. The ICIJ’s latest investigation looks at how wealthy individuals and corporations across the globe were able to avoid taxes through the tiny island off the Indian Ocean – at a tremendous cost to poor nations.

In response to the story, C4TF posted a blog detailing Canada’s connection to the leaks with billions of corporate investment that flowed to the tax haven and a lucrative deal cut with the infamous SNC-Lavalin. Other well-known firms with ties to the island included Sun Life Financial and the Canada Pension Plan Investment Board. Large Canadian accounting companies also play a role in facilitating complex international tax dodging schemes that cost the government billions in lost revenue each year.

Our Platform for Tax Fairness outlines steps the government should take to crack down on tax havens such as introducing stronger penalties and preventing firms that engage in or enable these practices from obtaining federal contracts. 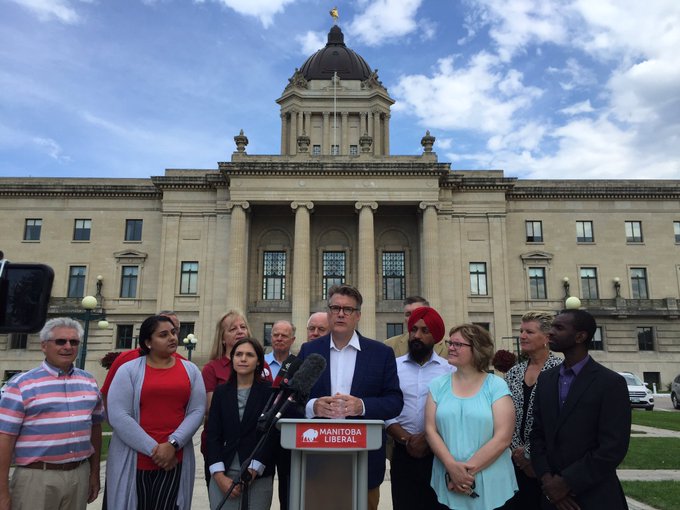 Manitoba Liberal Leader Dougald Lamont speaks in front of the legislature this week about his party’s plan to reform the provincial tax system to make is simpler and fairer. Photo: Danton Unger/Winnipeg Sun

What do tax credits and pizza coupons have in common? “You still have to have money to use them.” That was the message Manitoba Liberal leader Dougald Lamont highlighted this week as he called to make tax fairness a ballot box issue in the province’s upcoming election.

Lamont told the Winnipeg Free Press this week that the current system is too complicated and allows for “widespread tax avoidance.” He wants to publish a comprehensive list of tax expenditures, including who benefits from tax breaks and credits. The St. Boniface MLA is also calling for a public searchable registry of beneficial owners of corporations in the province.

Lamont pointed out that the Manitoba government, which is running a deficit, has good reason to reform the current tax system and recoup lost revenues. The link between a fairer tax system and funding for public services is one we hope to see promoted by other provincial politicians and all parties in the federal election later this fall. 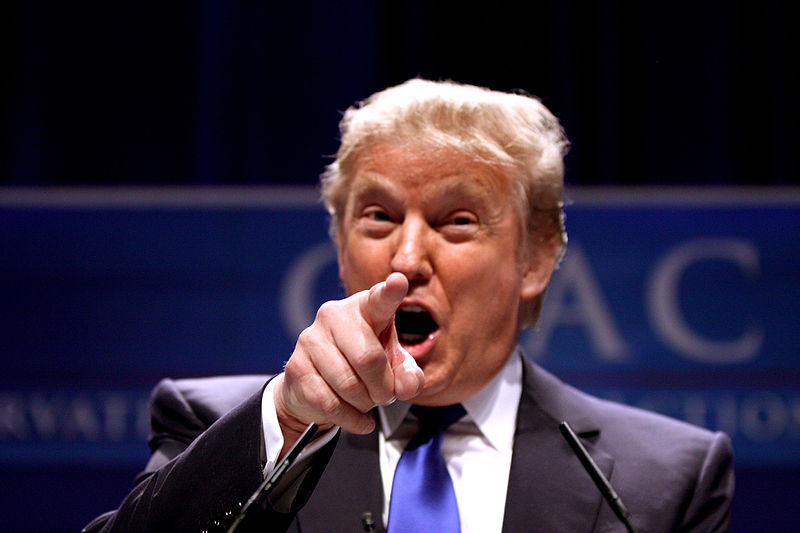 Tensions continue to escalate between the US and France after the European nation introduced a 3 percent tax on large foreign internet companies this year.

France’s ‘GAFA’ tax targets US-based digital giants such as Google, Amazon and Facebook earning more than $750 million in revenues annually. The GAFA group of companies have been able to avoid paying taxes despite soaring profits abroad.

After the EU failed to reach a consensus on a digital tax earlier this year, countries such as Spain and Austria have announced similar plans for a digital tax but France is the furthest along.

In response to the tax, US President Donald Trump threated tariffs on French wine, a warning France’s Agriculture Minister this week called ‘completely moronic’. The country’s Finance Minister also affirmed it will not back down unless a better deal for taxing internet giants can be struck internationally.

The OECD is considering new rules for taxing multinationals that could include measures such as setting a minimum corporate tax rate and allocating taxable income based on where companies have an economic presence – a system called formulary apportionment.

At the G7 meeting in France earlier this month, Ministers released a communiqué agreeing to find a solution that addresses the challenges of the digital economy by 2020, but some have argued that we need broader consensus beyond the OECD.

Amid international discussions, an excellent opinion piece in the Financial Times recently called on all countries to create a fairer global tax system. “This is a once-in-a-lifetime opportunity. Governments have no right to waste it,” urged José Antonio Ocampo, chair of the Independent Commission for the Reform of International Corporate Taxation (ICRICT).

Canada especially has an historic opportunity in these talks to reform the global corporate tax system, C4TF director Toby Sanger wrote in a recent op-ed in Policy Options. Timed around the G20 meetings earlier this summer in Japan, the piece points out that Canada has used a system of formulary apportionment between provinces for 50 years and can use this experience to promote a fairer tax model internationally. 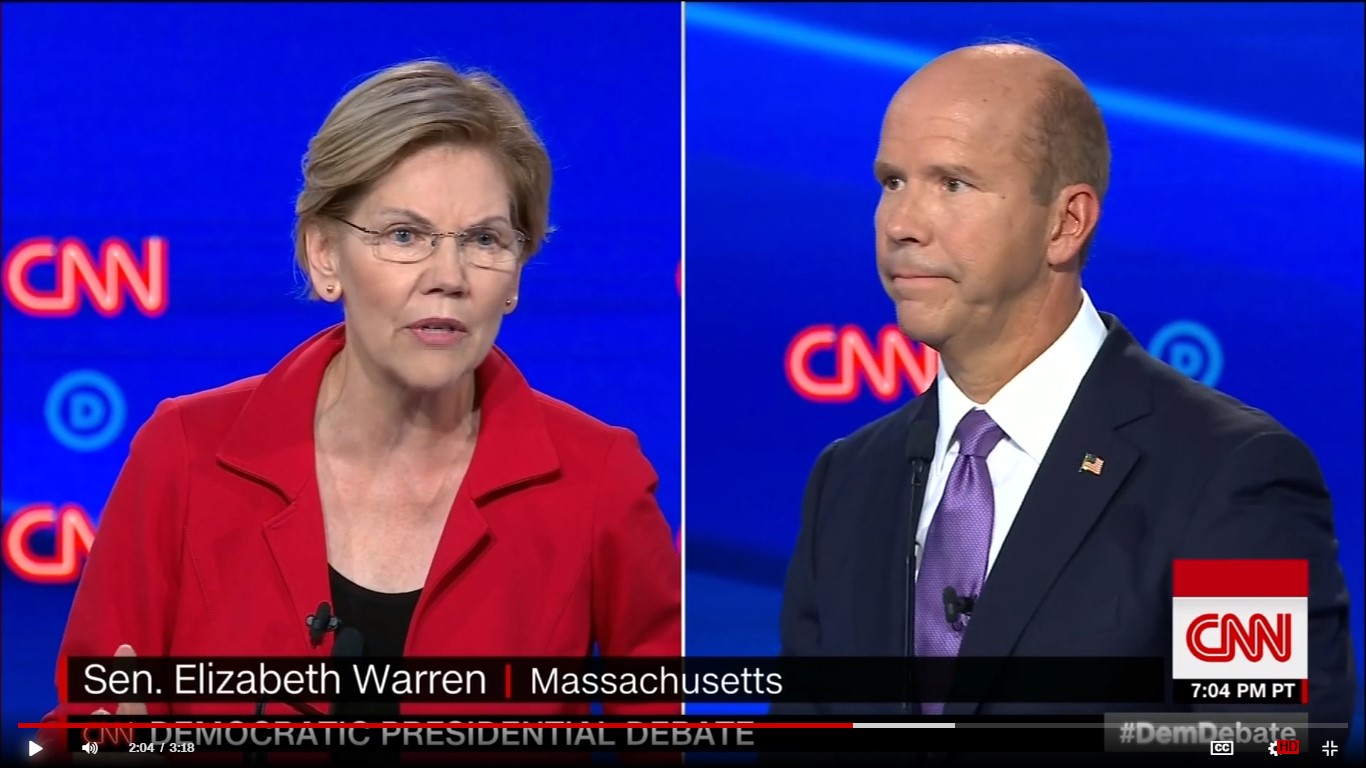 US Senator Elizabeth Warren, left, speaks at the Democratic Presidential Debate this week. In what has become a viral meme, the senator excitedly rubbed her hands when a question arose about her wealth tax, a hot topic both north and south of the border. CNN

Recent opinion columns have pounced on a popular policy to tax the very rich. The federal NDP announced earlier this summer it would introduce a 1 percent tax on wealth over $20 million as part of its election platform. Polling has found the majority of Canadians endorse a wealth tax, but critics claim it would drive away investors or be too difficult to implement. C4TF communications coordinator Erika Beauchesne addresses these and other anti-tax arguments in an op-ed this month in the National Observer, concluding the question is no longer whether to tax wealth, but the best way to do it.

A wealth tax has also dominated headlines in the US where Democrat Senator Elizabeth Warren has proposed a 2 percent levy on wealth over $50 million. Warren’s plan has the support of most Americans, including the very rich, but has also attracted Conservative critics in the media. A paper released this week points out that much of the recent criticism of a wealth tax is based on outdated models and ignores modern research.

Other progressive policies in the Democratic leadership race include Senator Bernie Sanders’ expanded estate tax and New York City Mayor Bill de Blasio’s proposals this week to “tax the hell out of the wealthy.” 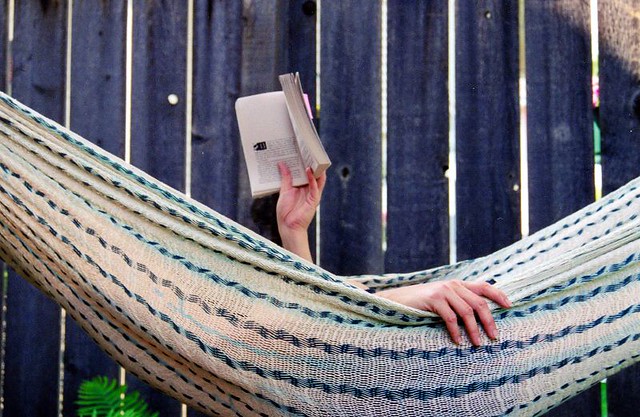 C4TF has a list of recommended ‘tax fairness’ reads for your summer. Zanzibar/flickr

If you managed to make your way through our last round of summer reading recommendations, we have more: 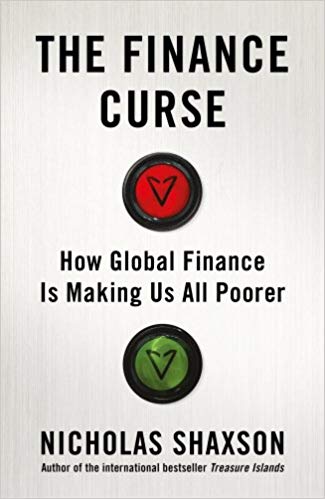 The Finance Curse: How global finance is making us all poorer by Nicholas Shaxson.  “We are told global finance is about wealth creation; the reality is wealth extraction.Tracing the curse back through economic history, Shaxson uncovers how we got to this point.” - Amazon 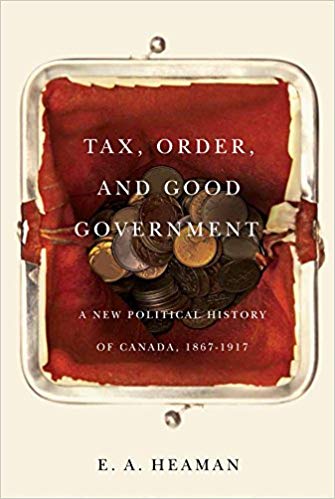 Tax, Order, and Good Government: A new political history of Canada, 1867-1917 by E.A. Heaman. “This book shows that the history of taxation is not only important – it can also be provocative, infuriating and exciting.” 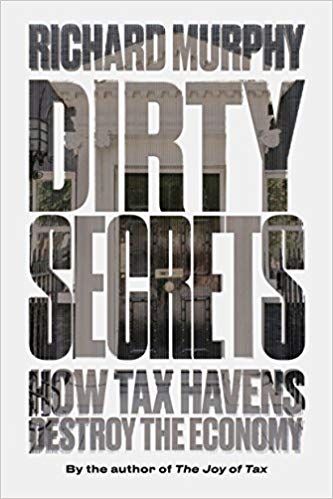 Dirty Secrets: How Tax Havens Destroy the Economy by Richard Murphy. “Dirty Secrets uncovers the extent of the corruption behind [the Panama Papers] crisis and shows what needs to be done in the face of this unregulated spread of rampant greed.” -Amazon 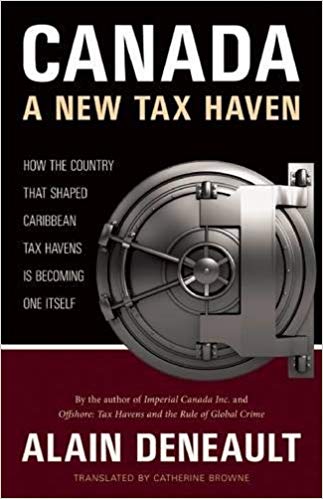 Canada: a New Tax Haven by Alain Deneault. “Alain Deneault traces Canada’s relationship with Britain’s Caribbean colonies back through the last half of the twentieth century, arguing that the involvement of Canadian financiers in establishing and maintaining Caribbean tax havens has predisposed Canada to become a tax haven itself” -Amazon 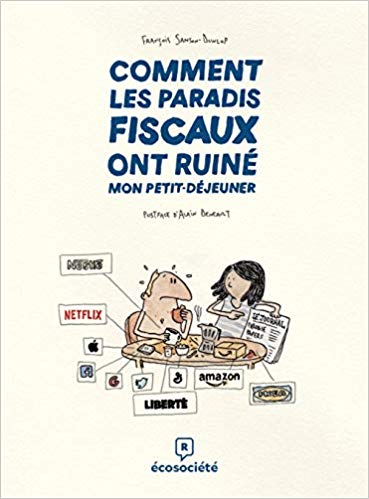 Comment les paradis fiscaux ont ruiné mon petit-déjeuner by François Samson-Dunlop. Comics artist  Samson-Dunlop humorously explores the subject of tax havens and how they touch our daily lives with this graphic novel that includes an afterword by Alain Deneault. 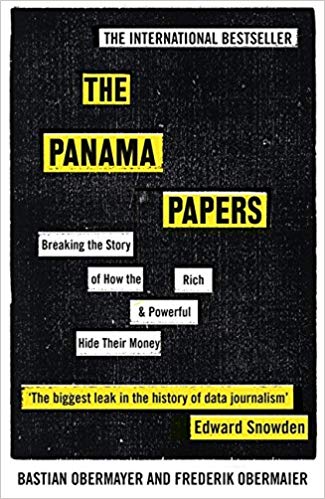 The Panama Papers: Breaking the Story of How the Rich and Powerful Hide Their Money by Bastian Obermayer and Frederik Obermaier. “The real-life thriller behind the story of the century, The Panama Papers is an intense, unputdownable account that proves, once and for all, that there exists a small elite living by a different set of rules and blows their secret world wide open.” -Amazon

October 18, 2019 — Here is this week's tax fairness news (sign up to receive our... more
END_OF_DOCUMENT_TOKEN_TO_BE_REPLACED