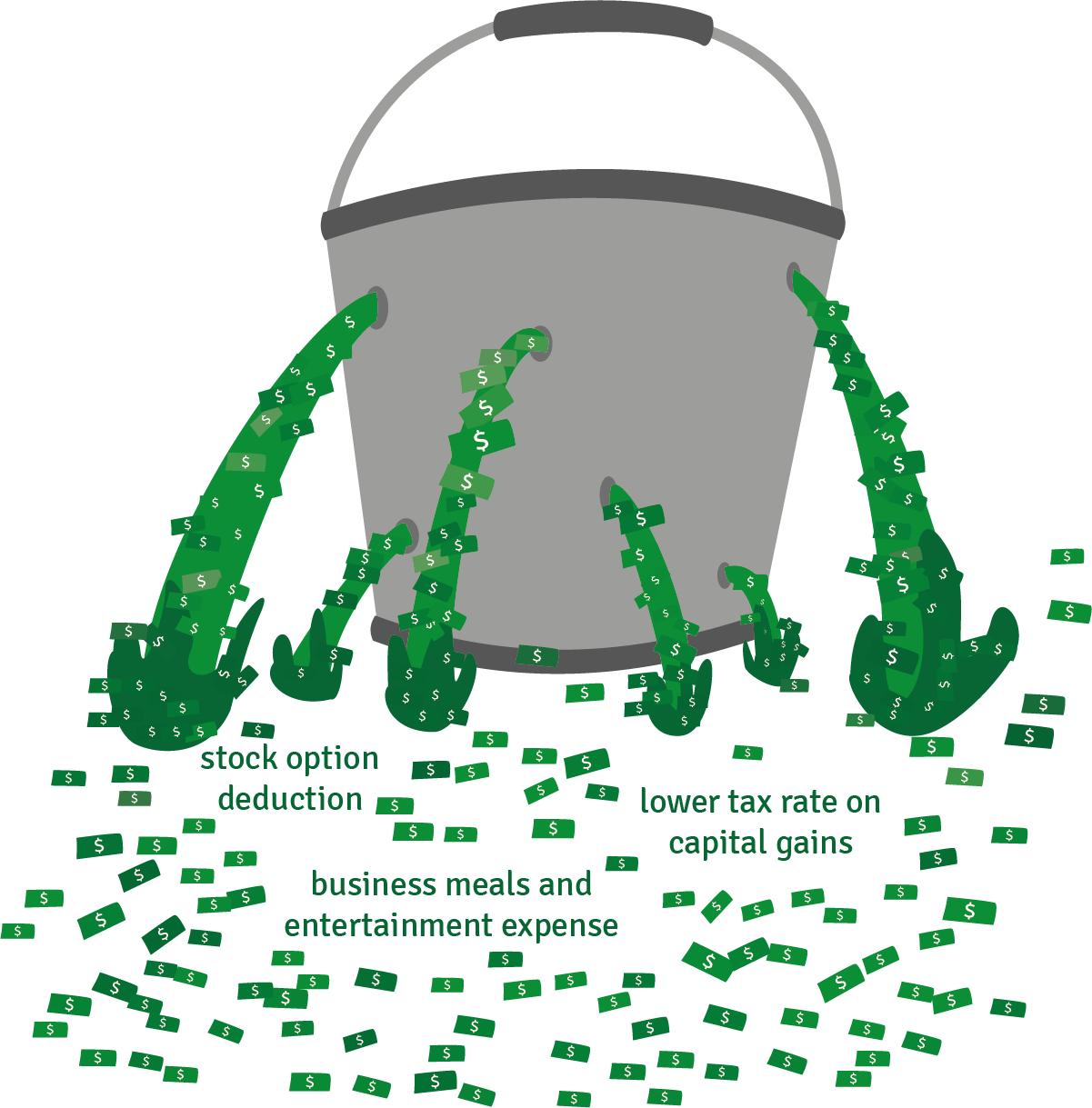 While some were introduced to encourage saving and investment, many haven’t been effective at that. In the last election, the Liberals promised to eliminate unfair and ineffective tax loopholes, but they left the job only partially done.

Here’s our list of the five most regressive and ineffective tax loopholes. Eliminating or reducing these would save the federal government over $16 billion annually.

How it works: Corporate executives are paid millions in stock options each year but they only pay tax at half the rate than the rest of us. This loophole encourages stock buybacks, increasing executives’ compensation instead of investing in the economy and creating jobs.

Who benefits? Meet Canada’s most regressive loophole — over 90% of the benefits going to the top 1%.

Recommendation: The 2019 budget announced plans to limit the use of this loophole for executives of large, mature companies. That would still leave a lot of holes, not affect any company not considered “mature” and allow each at least $200,000 in low taxed options each year.  The government should move to completely eliminate this unfair tax break. Companies can still provide employees with stock options, but they shouldn’t be provided with lower, preferential tax rates.   Annual savings $700M

How it works: Businesses can deduct half the cost of private boxes and tickets to sports events, concerts, all manner of restaurant meals and drinks, entertaining business partners and clients at night clubs, cruises, vacations and much more.

Recommendation: Close this costly loophole that can lead to all sorts of unsavory dealings. Even US President Donald Trump last year brought in tougher rules for their business entertainment expense deduction.  Annual savings $500M

How it works: This $5 billion tax break provides a credit to those receiving corporate dividends. It’s supposed to compensate shareholders for the corporate taxes that businesses pay, but many don’t pay any corporate income taxes and most pay tax at a lower rate than the dividend tax credit provides shareholders for.

Who benefits? Over 90% of its value goes to the top 10% and almost half to the top 1%. More than two-thirds goes to men, with less than a third paying out to women.

How it works: You pay taxes on every dollar of income from wages but when an individual or a business makes money from selling investments, they pay taxes on only half the amount they gain.

Recommendation: This tax break should be eliminated so income from investments are taxed at the same rate as regular income. However, the tax rate could be adjusted for inflation so those who hold investments, or family cottages or cabin, for many years don’t pay tax on the inflation. Eliminating this tax break will help to reduce speculation including real estate speculation that is driving up the cost of housing.  The total cost of this tax loophole for individuals and business adds up to $17 billion, but including an adjustment for inflation would reduce the revenues.  Annual savings: $13.6 billion

How it works: Putting money into a Tax Free Savings Account allows individuals who can afford them to completely avoid paying tax on any gains they make. This tax break mostly benefits those with high incomes who have already maxed out their RRSPs and pensions. The cost to governments will keep on escalating if they aren’t contained.

Recommendation: The federal government should cap the total lifetime limit per individual for contributions to TFSAs at the current level of $63,500.  Annual savings $200 million to start but rising considerably in future years.

Take Action Now: Please ask your local candidates what they plan to do to get rid of unfair tax breaks and make the tax system fairer.  Send a message to federal party leaders to tell them to finally close these regressive tax loopholes. Share this fact sheet.

Our Platform for Tax Fairness provides a comprehensive set of policy recommendations to make our tax system fairer, reduce inequality and generate revenues for public services. With weeks to go before the 2019 election, we are counting down the top 5 tax fairness measures —as voted on by our supporters— that federal parties should focus on this election.