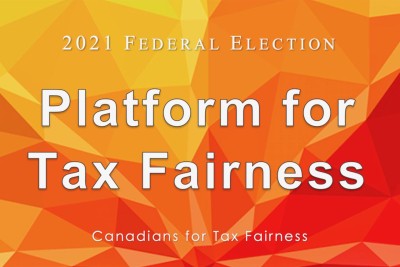 The federal government could generate over $90 billion in additional annual revenue without raising taxes on working or middle-class Canadians with the set of tax fairness measures included in the Platform for Tax Fairness, released today by Canadians for Tax Fairness.

“This platform shows that there are many ways the federal government can raise billions in additional revenue for public services, while making the tax system fairer, by closing regressive tax loopholes, taxing the rich fairly, making corporations pay their fair share, tackling tax havens, and making polluters pay,” said the platform’s author, Toby Sanger, economist and Executive Director of Canadians for Tax Fairness.

The organization is encouraging all political parties to adopt these measures in their platforms in the federal election campaign. “While we don’t expect a political party or government to implement all of these measures, Canadians should be aware that there is far more that the federal government could do to increase its revenues and to invest in our future,” said Sanger. “Investing in public services also yields a much higher rate of both economic and social return than tax cuts for the rich and large corporations, so there’s no reason for governments not to make our tax system fairer.”

The measures could generate over $26 billion from closing tax loopholes, $24 billion from increasing taxes on the wealthy, $25 billion from higher taxes on large corporations, $14 billion from tackling tax havens, and an additional $3 billion from eliminating fossil fuel subsidies and ending tax preferences for large emitters. Estimates of revenues for these measures were derived from reports published by Finance Canada, the Parliamentary Budget Officer and other authoritative sources.