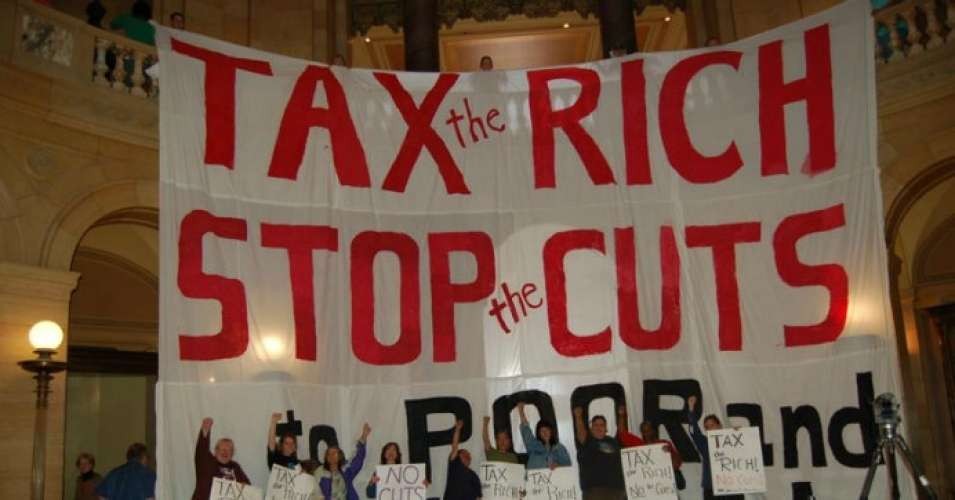 In a lead-up to the federal budget April 19, C4TF is asking supporters to tell Canada’s Finance Minister that we need a Tax Fairness budget to build back better. We also released a Fair Tax Recovery Plan outlining how the federal government can address inequality and raise more than $60 billion annually in revenues by making the tax system fairer. Our report includes estimates of how much each tax policy could generate.

A new study by the B.C. chapter of Canadian Centre for Policy Alternatives  calculated that an annual net wealth tax would raise significantly more than previous estimates from the Parliamentary Budget Office. It found a 1% tax on wealth over $20 million in Canada would generate about $10 billion in revenue in its first year while a more ambitious tax could raise nearly $20 billion in its first year.   The CCPA-BC’s results are similar to the $20 billion C4TF estimated a modestly progressive annual wealth tax would generate, at a rate of 1% on net wealth over $10 million, 2% on wealth over $100 million and 3% on wealth over $1 billion.

In the U.S., Democrat Senator Elizabeth Warren has revived a wealth tax proposal that would see the wealthiest Americans pay over $78 billion and cost the world’s richest person, Jeff Bezos, $5.4 billion.  That’s a small price to pay considering that his wealth has increased by $70 billion over the last year alone!

As governments around the world seek to address rising inequality and find new revenue sources in the pandemic, tax reforms once considered taboo are gaining ground.

The Conservative government in the U.K. announced it will raise corporate income tax rates from 19% to 25%.  This was a clear admission—and by Conservatives, too!—that decades of corporate tax cuts have failed to stimulate investment, as we have emphasized frequently.  U.S. Treasury Secretary Janet Yellen also recently endorsed a global minimum corporate tax rate, which is being considered through OECD negotiations, to “stop the destructive race to the bottom on corporate taxation.”

After decades of corporate tax cuts that have failed to create jobs and stimulate the economy, it’s time for Canada to restore tax rates and support the introduction of a global minimum tax rate as well.

C4TF director Toby Sanger recently took part in a panel discussion with fellow tax fairness activists in the U.S. about the growing global movement for fair taxation at the Broadbent Institute’s 2021 Progress Summit. In another panel discussion hosted by the climate activist organization Below2C, Sanger addressed how tax justice can help fund the climate crisis.

C4TF researcher D.T. Cochrane recently appeared before the House of Commons Standing Committee on Finance  (video starts at 16:14) where he discussed the need to redistribute wealth that has accumulated at the top. He also appeared on CPAC this week to discuss what we’d like to see in the budget.

The need for progressive taxes has never been clearer with multiple studies emerging about how extreme inequality has become. A new Statistics Canada report found intergenerational income mobility is increasingly declining and children who are born into wealth or poverty are more likely than ever to remain there. Another study from UBC has linked inequality to a shorter life span, with men in the top earnings ventile (top 5%) outliving those at the bottom by eight years.

C4TF board member and Dalhousie University Economics Professor Lars Osberg also recently released a report tracing 75 years of inequality in Canada, including how the COVID-19 crisis has exacerbated disparities and why we need to reshape economic policies to build back better. 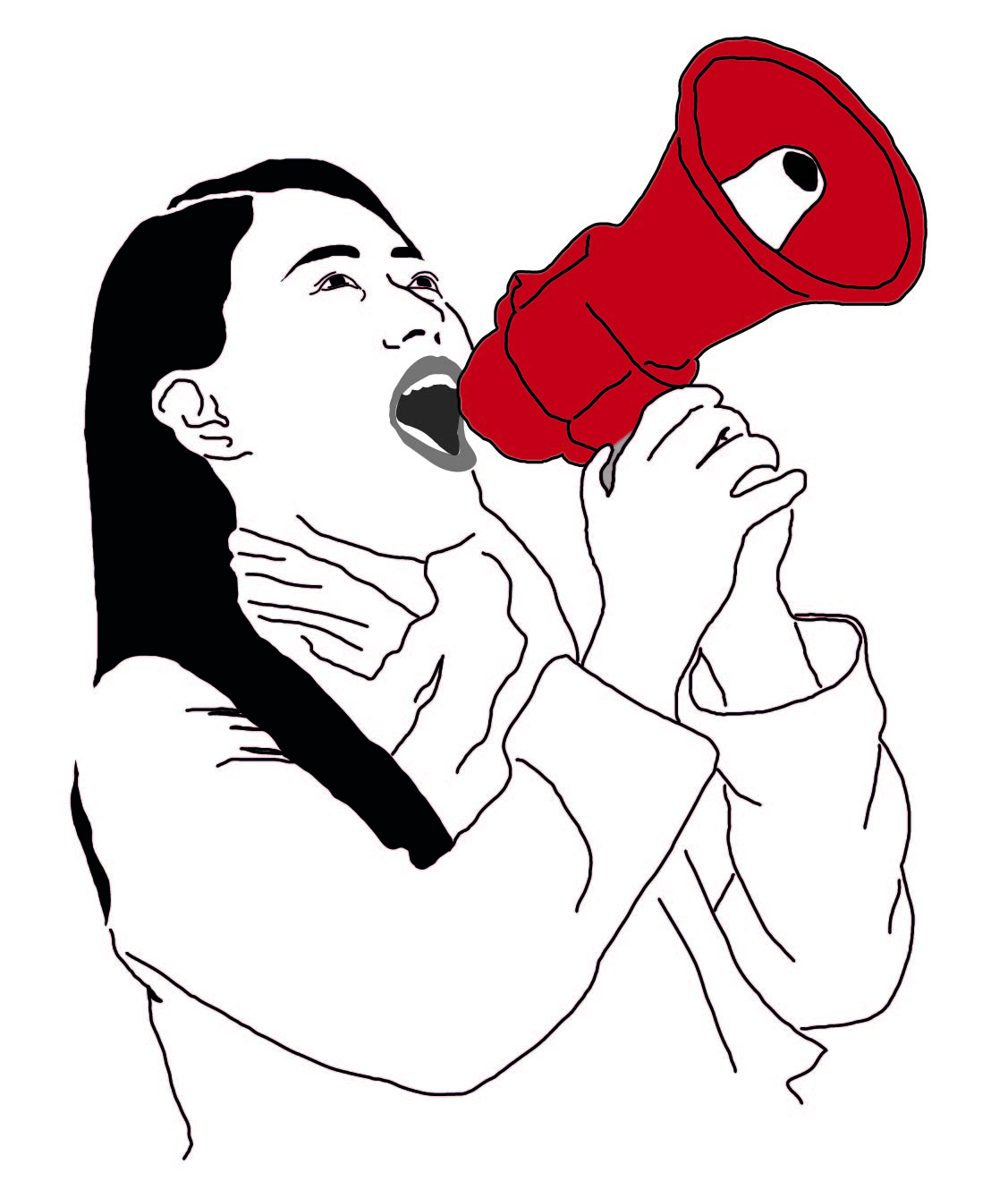 C4TF again this year joined its international tax justice allies in the Global Days of Action campaign, which calls on governments around the world to introduce progressive tax reforms to support gender equality.

As we explore in this piece, women bear the brunt of unfair tax practices that lead to lost revenues and public services. The COVID-19 crisis has had an unequal impact, especially among racialized and lower-income women, in terms of increased risk, lost work, and extra care burdens. The tax system has a critical role to play in addressing these disparities.

Oxfam Canada’s annual Feminist Scorecard, which includes a chapter on tax fairness, points out that while Canada has made some progress, much more work remains.

Watch communications coordinator Erika Beauchesne discuss how these and other tax reforms can achieve greater gender equality during an international panel hosted by the Global Alliance for Tax Justice. The panel included tax justice activists from around the world who addressed the specific challenges facing women in their region.

Canada’s Finance Minister Chrystia Freeland recently appointed an all-women Task Force on Women and the Economy. The taskforce, which includes several progressive economists, including C4TF advisor Armine Yalnizyan and University of Calgary tax expert Lindsay Tedds, will advise government on a feminist action plan to address gender equality issues in the wake of the pandemic. C4TF is encouraged by this step to include more women and diverse perspectives in Canada’s recovery planning. 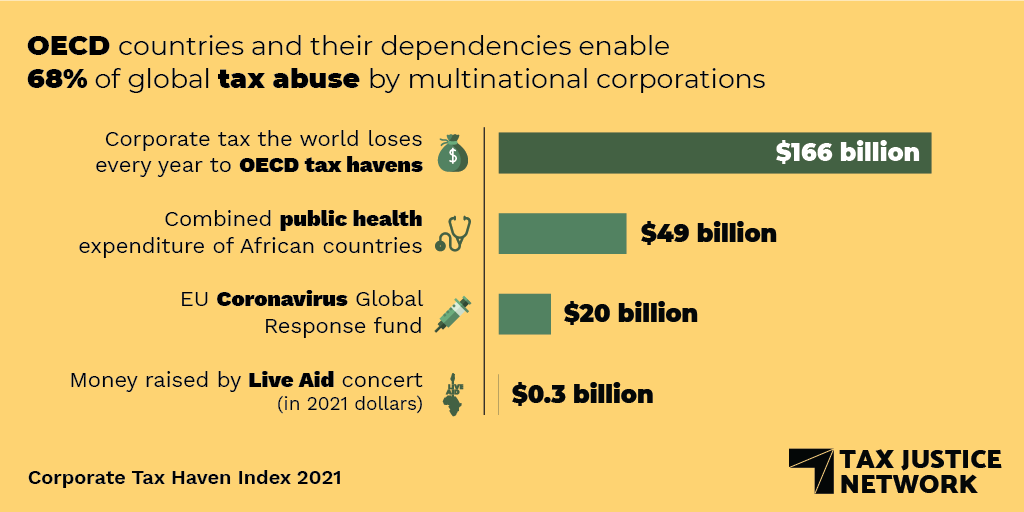 OECD countries and their dependencies are responsible for 68% of global corporate tax abuse, according to this year’s Corporate Tax Haven Index by the Tax Justice Network.

With the OECD leading discussions to reform the global tax system, the report questions why we should rely on the countries that are most responsible for tax haven abuse to fix international tax rules. As tax justice advocates told the media, “to trust the OECD in light of its findings is like trusting a pack of wolves to build a fence around your chicken coop.”

While Canada was not included in this year’s index, 7 out of 10 of the report’s top tax havens were among Canadian corporations’ favorite tax havens, as calculated by a C4TF report last year.

C4TF supports the report’s recommendations for a more inclusive approach to fixing global tax rules through the UN rather than the OECD and calls for the Canadian government to take immediate unilateral action to tackle tax havens in the absence of an international consensus. 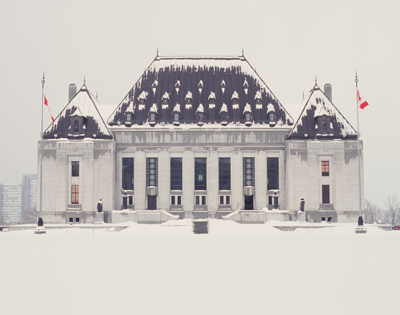 The Supreme Court of Canada has dismissed a tax case against Cameco. Photo: SCC

For decades, Cameco has shifted billions in profits to a tiny trading subsidiary in Switzerland while declaring little or no profits in Canada, and paying little or no corporate income tax. The Canada Revenue Agency reassessed Cameco for $2 billion in unpaid taxes and penalties, but lost at court successively before the Supreme Court dismissed the CRA’s appeal request.

In a release, C4TF said the court’s dismissal of this case reflects the need for government to strengthen corporate tax rules in order to hold multinationals accountable. We agree with Cameco’s CEO, who said that if the government doesn’t like the way the laws are written, they should change them—and this is a multi-billion dollar message from the Supreme Court to the federal government that these reforms are urgently needed.

As C4TF director Toby Sanger told the Toronto Star, unless government reforms rules around profit-shifting and tax havens, corporations will continue costing Canadians billions in lost revenues that could be used to help pay for the pandemic and recovery. In another interview with Postmedia, Sanger said he hopes the case will be a “kick in the pants” for the Liberals to strengthen the law. 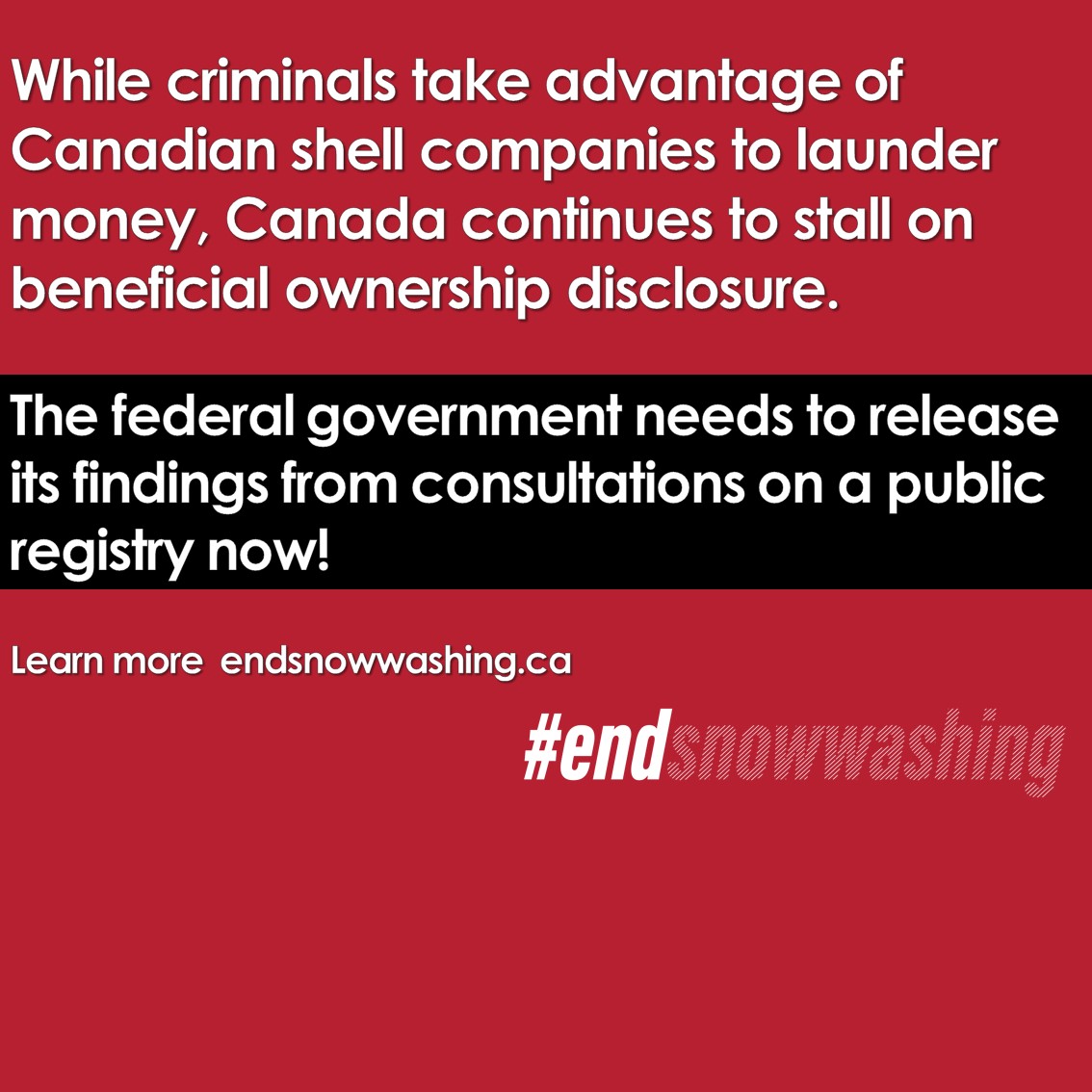 Canadians for Tax Fairness and its coalition partners Transparency International Canada and Publish What You Pay Canada are asking the federal government to release the results of its consultations on a public registry of beneficial owners.

Over a year ago, the Ministry of Innovation, Science and Economic Development (ISED) held consultations on how a publicly accessible registry listing beneficial ownership information for private corporations can address Canada’s money laundering or “snow-washing” problem.

At least 48 countries worldwide, including all EU member states, and the United Kingdom have committed to, or have implemented publicly accessible registries listing beneficial ownership information. The U.S. also recently passed historical legislation outlawing anonymous companies, but Canadians are still waiting for their government to release its findings from consultations.

In addition to numerous Canadian experts who have called for greater beneficial ownership transparency, a recent report by the UN Financial Accountability Transparency and Integrity panel identified a centralized registry for beneficial ownership as a key measure to stop illicit financial flows and mobilize public resources needed in the recovery.

The panel encouraged countries to make the registry information public, in addition to other transparency measures such as requiring multinationals publish accounting and financial information on a country-by-country basis – a move the EU recently adopted. Global standards are also needed for financial, legal, accounting, and other relevant professionals, the panel said.

The OECD recently made similar recommendations in a new report exploring how facilitators such as tax advisers, lawyers and accountants enable financial crimes. The organization recommends countries improve education about the role of enablers in financial crime and strengthen laws to hold them accountable. 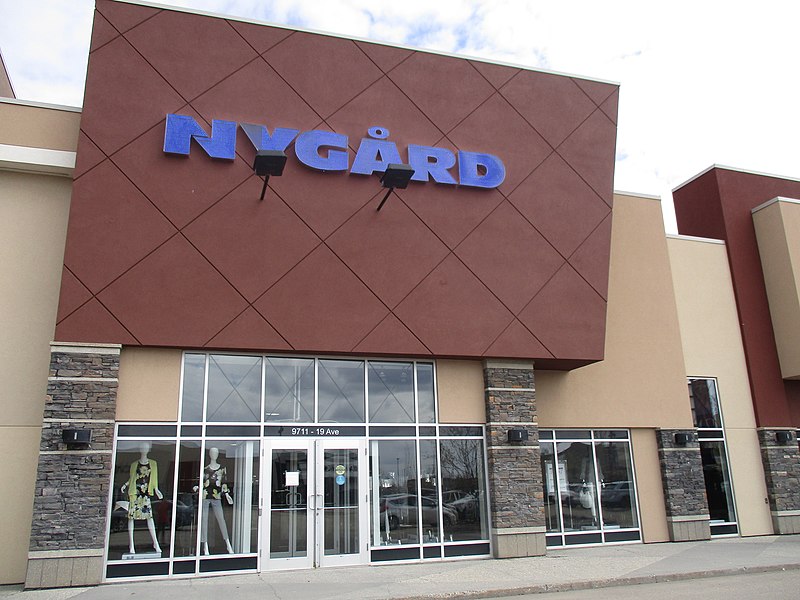 More than 100 women have accused Canadian fashion mogul Peter Nygard of rape and sexual assault in what has been described as a large international sex trafficking venture involving hundreds of employees who allegedly enabled the crimes.

The founder of fast-fashion company Nygard had previously made headlines for abusive labour practices and tax evasion. As we noted in our 2020 report on Canadian corporate tax haven use, Nygard’s empire was based in the Bahamas but included multiple corporate entities across the world. He was also named in the 2017 Paradise Papers.

The disturbing sex-trafficking charges mirror other recent cases of powerful billionaires who have acted above the law, both in terms of sex and tax-dodging scandals.

Convicted sex trafficker and leader of the NXIVM cult Keith Raniere avoided paying taxes and told his followers to do the same.  His wealthy backer, Claire Bronfman, and heiress to the billionaire Bronfman family’s Seagram empire, was also convicted. . Victims of the cult said Bronfman used her wealth like a weapon and the heiress has reportedly paid for the legal fees of fellow defendants. The Bronfman dynasty also has links tax havens as was revealed in the Paradise Papers.

As this Forbes story details, many of the world’s richest and most powerful individuals are embroiled in the biggest scandals, from tax dodging to financial fraud and sex crimes.