Explainer: What are Canada’s tax breaks for oil & gas companies? 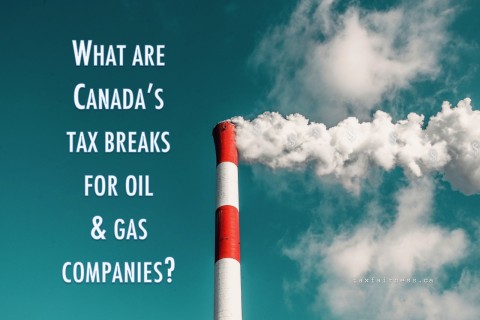 To fight costly climate change, Canada needs to quickly transition toward a sustainable economy with low-emission energy sources. The tax system has an enormous influence on this transition. Currently, our tax system is not helping that transition move quickly. Instead, Canadian governments subsidize the fossil fuel industry to the tune of $4.8 billion per year. Making our climate tax policies effective should involve ending tax incentives for carbon polluters, increasing the price on pollution, improving transparency on public subsidies to fossil fuels, and taxing high-emission imports.

HOW DOES CANADA SUBSIDIZE OIL & GAS?

A large portion of Canada’s subsidies for oil & gas are delivered via significant tax breaks for fossil fuel producers and large carbon emitters. These breaks take on many forms, such as lower carbon tax rates, reductions on crown royalties, tax credits for infrastructure, and support for research & development.

Preferential carbon pricing treatment: Further, the oil & gas sector receives preferential treatment under Canada’s carbon pricing system with the justification that it must remain internationally competitive. However, this just keeps fossil fuel companies excessively profitable, as they have been for decades.

Significant investment: While giving these tax breaks, the government has also invested at least $45 billion into the fossil fuel industry since early 2020 alone - almost $1,200 per Canadian.

WHAT PROGRESS HAS BEEN MADE?

The Liberal government has set a timeline to transition to a low-carbon economy by 2030 and eventually into a net-zero emission country by 2050 [1]. It has made several relevant promises, but so far only reformed a handful of regressive tax measures that incentivise fossil fuel production and use.

Budget 2022 committed to eliminating flow-through shares that entice investment in oil & gas companies by lowering the tax bills of investors. This is a welcome policy change, but not enough. We need to act faster.

WHAT NEEDS TO BE DONE?

Here are some tax strategies the government can implement now, to expedite the process toward net-zero emissions:

Regarding investments: The government can also phase out investment in the fossil fuel industry, and invest in training programs for transitioning non-renewable energy workers to renewable, sustainable jobs. According to the IISD, the money used for fossil fuel subsidies could fund the training of at least 480,000 workers to support green energy production.