Explainer: What are the Pandora Papers? 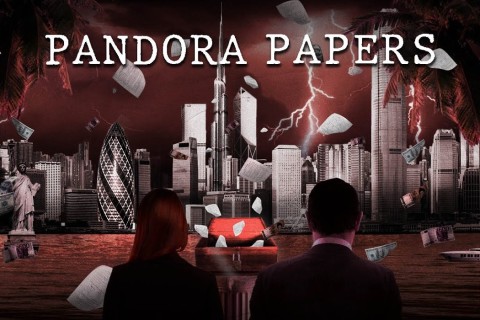 The International Consortium of Investigative Journalists (ICIJ) has published yet another leak of information about the financial shenanigans of the ultra-wealthy and powerful. It is calling this trove of records the ‘Pandora Papers’.

On the one hand, this latest leak reconfirms what we have long known: the global elite use a range of unethical techniques, many of questionable legality, to hoard their wealth and avoid taxes. On the other hand, with each leak from the ICIJ we learn a little bit more about the whos and the hows of global wealth hoarding. And with each leak we are also reminded of how little has been done by the Canadian government to reign in these harmful practices.

WHO IS THE ICIJ?

The ICIJ is a non-profit organization that coordinates investigative journalism on issues that transcend national boundaries.

Our political, economic, and financial systems are thoroughly globalized. Understanding these systems, and holding them accountable, requires journalism that is just as global. The ICIJ supports this necessary global collaboration among journalists. The latest leak involved more than 600 journalists from over 100 countries.

The ICIJ actively solicits leaked documents, as well as tips about potential abuses of power, that expose the otherwise clandestine practices of the powerful. When the non-profit organization has received a lead, it coordinates the appropriate scale of transnational investigation by its members.

The ICIJ has previously coordinated other investigations of tax haven abuse, including the Panama Papers (2016), the Paradise Papers (2017), the FinCen Files (2021), and more.

WHY ARE THEY CALLED THE PANDORA PAPERS?

The first high-profile leak reported on by the ICIJ came from a Panamanian law firm called Mossack Fonseca. Hence, these were known as the Panama Papers. A subsequent leak was called the Paradise Papers. Similar to the Panama Papers, the documents came from a company located in Bermuda, a country with a tropical climate and beautiful beaches.

The name ‘Pandora Papers’ refers to the mythical figure of Pandora, who opened a box that unleashed illness into the world. In this case, the illness of wealth inequality is already in the world. The Papers are really a catalogue of how wealthy elites maintain their privileged positions.

WHAT MAKES UP THE PANDORA PAPERS?

The Pandora Papers are about 12 million records described by the ICIJ as “documents, images, emails, spreadsheets, and more.” They describe the use of various legal entities, such as shell companies and trusts, to buy and sell assets, including real estate, yachts, artwork, and financial instruments. The majority of the documents date from 1996 to 2020.

The ICIJ had to first organize all those disparate items before it could begin analyzing them.

WHERE DID THE PANDORA PAPERS COME FROM?

While previous leaks came from a single firm, these reports came from 14 different companies known as “offshore service providers.” These are companies that offer business functions—such as setting up a shell company—in a jurisdiction other than where the beneficiary resides.

The 14 companies operate in dozens of jurisdictions, including Canada.

These companies are a tiny slice of all offshore service providers. For example, six of the companies have an office in the British Virgin Islands. But the ICIJ notes that in the BVI there are at least 101 companies that offer similar services.

WHO LEAKED THE PANDORA PAPERS?

The records were leaked anonymously. The ICIJ works diligently to protect the identity of leakers. In addition to analyzing the documents to understand their contents, the group has to make sure they do not contain information that might expose the leakers. Although the records in the Pandora Papers are not yet public, the ICIJ has made data from previously leaks, including the Panama and Paradise Papers, publicly available.

The most likely possibilities for the leakers are ethical hackers or outraged insiders. In either case, they are heroes for shedding light on this clandestine financial world.

WHAT HAVE WE LEARNED FROM THE PANDORA PAPERS?

Much of ICIJ’s efforts to organize the millions of records, and make them useful to journalists, was devoted to identifying the beneficial owners of companies. Those owners include some high-profile names: politicians, celebrities, businesspeople. The earliest reporting has focused on these well-known figures.

The BBC offered a summary of what the earliest international reporting revealed. The CBC and Toronto Star both reported on some high-profile Canadian names found in the Papers.

The most important of the exposures are the politicians. Presidents, finance ministers, a King, and former government leaders are identified among those benefiting from this exclusive world of the ultra-wealthy. These are the people that we count on to change the rules making international tax avoidance schemes illegal.

This leak has also revealed just how important South Dakota has become as a hub in the global network of wealth secrecy. It was, by far, the state most identified with trusts established by the offshore service providers. South Dakota seems to have overtaken Delaware as the most tax-haven friendly US state.

While more names will come out in the immediate aftermath, researchers will continue to mine this data for years to come.

We’ll learn more details about the schemes that are being used. The ins-and-outs of tax avoidance schemes can be very mind-numbing complicated. But tax investigators need that information in order to ensure compliance.

We will also get more analysis that looks at the broader structure of wealthy owners. Since the types of ownership arrangements exposed in these leaks is almost entirely the exclusive domain of the richest-of-the-rich, these records are an important window into a shadowy world.

The highest-profile figures, with their carefully managed public personas, are a tiny fraction of the thousands of obscenely wealthy people involved. The members of this rarefied ownership class have more in common than a shared willingness to use unethical, and possibly illegal, schemes to avoid taxes. We need greater understanding of their shared interests and practices.

HOW MUCH MONEY IS INVOLVED?

The ICIJ has not reported a figure for the total assets involved. However, we safely say it is in the trillions of dollars.

It is estimated that international tax avoidance costs governments hundreds of billions in revenue every year. These estimates are—understandably—highly uncertain because secrecy is a key component of tax avoidance by the elite.

Whether it is hundreds of billions or trillions, the money that goes uncollected by governments remains under the control of the ultra-wealthy. These privileged owners are able to leverage that wealth to gain even more wealth. Worsening wealth inequality gives the financial elites even greater power to bend the rules, get away with breaking the rules, and rig the system.

WHAT DO THE PANDORA PAPERS MEAN FOR CANADA?

There are Canadian names in the Pandora Papers, just as there were in the Paradise Papers and the Panama Papers. This is beginning to feel a bit like Groundhog Day. That is due to an inadequate response by the government. We lag behind some of our international peers in financial transparency. It is time to play catch-up.

We also know that Canadian accounting expertise is involved. A Canadian accountant was reportedly involved in the creation of the King of Jordan’s secretive network of global asset holdings.

This is not the first time Canadian accountants have been implicated in a high-profile tax avoidance scheme. Such expertise was also involved in the Isle of Man scandal, which tarnished the reputation of accounting giant KPMG.

The Parliamentary Budget Office estimates that Canada loses about $25 billion in corporate taxes to profit shifting, which exploits international tax differences. To put that figure in perspective: it is enough to hire two personal support workers for every long-term care bed in the country AND pay the tuition of every post-secondary student.

WHAT CAN WE DO?

While all the individuals exposed by the Pandora Papers, whether they did something illegal or merely unethical, should be viewed with scorn, this truly is a systemic issue. Tax agencies should investigate the individuals involved and pursue legal action where possible. But more importantly, this reinforces the need for governments to act. Action promised after the Panama Papers has been too slow, and inadequate.

Here are four immediate things we should demand that the government do:

1. Increase funding for the CRA to investigate international tax schemes.

In the five years since the release of the Panama Papers, the CRA has not charged a single person. This is either due to the complexity of the cases, the lack of proper policies that made the schemes legal under Canadian tax law, or the lack of teeth to properly enforce the law. Regardless, the CRA needs greater resources sooner rather than later.

The government promised this in the last budget. The NDP and Greens both supported a registry in their election platforms. The budget timeline needs to be sped up. We need to know who owns what, where. Then we can ask ‘why’ and separate the legitimate from illegitimate reasons.

3. Implement a global minimum corporate tax rate of at least 21%.

A suitably high minimum corporate income tax would greatly reduce the incentive to use tax havens. If a company uses a tax planning scheme to reduce its taxes below the minimum, then Canada would impose a tax that ensures a minimum payment. The Biden administration suggested implementing a minimum tax of 21%. Unfortunately, negotiations at the G20 saw that reduced to a much less effective 15%.

The purpose of these agreements is supposedly to prevent ‘double taxation’. When paying taxes in a foreign jurisdiction, a Canadian company or individual is supposed to be able to avoid being taxed again at home on the same income. However, the far bigger problem is double non-taxation. These agreements super-charge international tax avoidance schemes, greatly increasing the likelihood that corporate income will be taxed neither abroad nor at home.

5. Impose a minimum tax on overseas assets held by Canadians.

This would ensure that the Canadians exploiting tax havens cannot avoid paying a reasonable amount of tax on the assets and income being sheltered. Any taxes paid to another jurisdiction could be declared and deducted, with a top-up paid in Canada to meet the minimum.

These are only some of the measures that the federal government can take to reduce the ability of elites to hoard wealth and avoid taxes. We can strengthen the language of “generalized anti-avoidance rules”, which clarify what kinds of “tax planning” violate the spirit of our tax laws. We can increase the punishments for violating our tax laws. We can work with the international community to create a global asset registry. We can hold accountable the advisors that create tax avoidance schemes.

As individuals, we need to tell our government representatives that we want action. All of the major parties acknowledged the problem of economic inequality during the last election. Now they need to do more than talk. They need to acknowledge that inequality is implicated in almost every other issue facing Canadians.

The rich have enjoyed a separate set of rules for far too long.