Explainer: What is the business meals and entertainment expense deduction loophole? 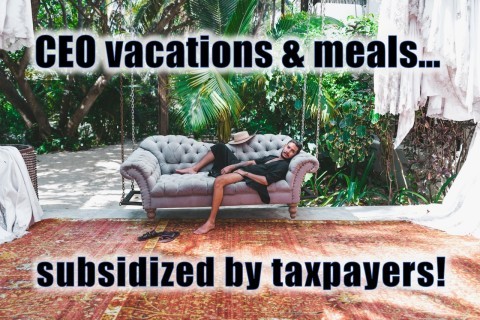 In theory, in order to be eligible for these deductions, actual business must be conducted during these meals and events. The original intent was to give small businesses a tax break for the cost of conducting business with clients. However, the deduction has become widely abused.

HOW IS THIS DEDUCTION ABUSED?

Large corporations take advantage of this deduction by spending extravagant amounts of money on their CEOs and clients, then deduct those expenses from their taxable income. Big companies also benefit disproportionately, with budgets that allow spending well beyond what small businesses can afford.

This tax measure is easy to abuse because a wide array of expenses can be claimed as “entertainment” and there are grey areas about what is allowed.

For instance, the amount that can be claimed is simply defined as “an amount that is reasonable in the circumstances.” What is ‘reasonable’ is very subjective and open to interpretation.

WHAT DOES THIS LOOPHOLE COST US?

Why should working Canadians cover the cost of unnecessary and dubious perks for high-income corporate managers and their often well-connected clients?

WHO BENEFITS FROM THIS LOOPHOLE?

The big beneficiaries of the meals and entertainment expense deduction are big corporations, the people who run them, and their clients.

This deduction also contributes to some unsavoury forms of lobbying and business marketing. For instance, under these rules SNC-Lavalin could have claimed many of the costs it incurred for "entertaining" Saadi Gaddafi as part of their alleged bribery scheme to obtain contracts in Libya.

That said, meal expense deductions on their own can often be legitimate. Employees whose job requires travel or off site business incur extra food costs that would otherwise be avoided. Responsible companies use the meals deduction to conduct business without spending abusively at pricey establishments.

WHAT SHOULD WE DO WITH THIS LOOPHOLE?

Canada should follow the lead of other countries, which are limiting abuse of this loophole.

Even former US President Donald Trump, who cut taxes for billionaires, thought this loophole was bad enough to eliminate the US version for entertainment expenses, although it was retained for meals.

The UK has made most forms of business and client entertainment non tax-deductible (though loopholes in their legislation remain).

In the end, this deduction is a disrespectful and dissatisfying aspect of the tax system, with marginal benefit to everyone except the very rich and well-connected.

Taxpayers shouldn't pay for some CEO’s corporate box at a big sports venue, or dinner at a four star restaurant. Deductions for entertainment expenses should be abolished, and concrete limits should be placed on deductions for meal expenses.

{Photo by Douglas Sanchez on Unsplash}