Explainer: What is a Wealth Tax? 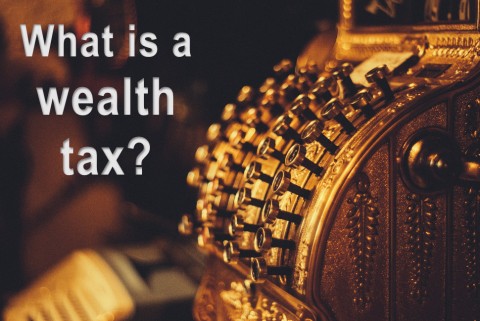 An annual net wealth tax is a small tax on the highest amount of the net wealth of the richest people. In other words, it is simply a small percentage of an individual’s total wealth, if the value of their wealth exceeds a specified threshold.

Wealth taxes are fair for everyone because super-rich people get very little of their wealth from taxable income, and have the means to avoid paying many other taxes too. [1] They’re even fair to the super-rich, because their vast wealth can keep growing, while a small amount gets reinvested into the economy on which their growing wealth depends.

HOW DOES A WEALTH TAX WORK?

They also work like top tax brackets, because the super-rich only pay a wealth tax on the highest amount of their wealth - not all their wealth.

So essentially, every year, the government adds up the value of all the assets of the super-rich, and the growing piles of cash in their bank accounts, and requires them to contribute a small percentage of that growing wealth back into the society from which it came.

HOW MUCH WOULD A WEALTH TAX RAISE?

There have been several proposals and estimates for the benefit of a wealth tax in Canada. The Parliamentary Budget Officer (PBO) estimates that just a 1% wealth tax on wealth over $20 million would result in revenue over $5 billion annually. This would apply to less than 0.1% of Canadian households.

Meanwhile, the NDP, in their 2021 platform, proposed a wealth tax of 1% on wealth over $10 million which would result in approximately $60 billion in revenue over the next five years.

C4TF’s proposal for a wealth tax would be even more progressive, at 1% for wealth over $10 million, 2% for over $100 million and 3% for wealth over a billion, which would generate close to $20 billion annually.

All these proposals are modest, given that so much could be raised from so few, who would notice so little change in the growth of their fortunes (and would likely find ways of paying less than the full amount).

And all these proposals are fair, when we realize that the wealthiest 0.2% of Canadian families own an estimated TRILLION DOLLARS in growing assets. While the average Canadian house price is over an unaffordable $748,000, these approximately 25,000 families could buy up 1,336,114 homes, or 53 homes per family!

The government could also afford to retrofit 40% of Canada’s homes and other buildings to be energy efficient ($6 billion annually over five years) which would create 80,000 jobs per year, reduce energy use & bills up to 50%, and reduce greenhouse gas emissions up to 17%.

WHERE HAS IT WORKED?

Some countries have already implemented wealth taxes. Here are a few examples:

Norway has seen revenue from their wealth tax grow steadily since 2008. In 2019, they reported the equivalent of 1.6 billion euros in revenue, in a country with a population of only five million.

Spain has implemented a progressive wealth tax with several brackets based on wealth and region.

Switzerland also has a successful wealth tax based on region and level of wealth accounting for an additional 4% in tax revenue annually. Many of the wealthiest people still flock to Switzerland knowing they will pay a wealth tax.

Other countries that have successful wealth taxes include Argentina which was able to pay for the equivalent of $2.4 billion in emergency Covid relief, France which has a wealth tax specifically on real estate, Colombia which aims to collect $6.9 billion a year, the Netherlands, Italy, and Belgium.

Tax fairness: Unlike regular working people, the super-rich don’t get most of their money from income. It comes from their investments. So they pay relatively much less income tax than the rest of us. Our laws only tax 50% of their investments, and their lawyers and accountants find other loopholes to help them dodge taxes.

Principle: Currently, 1% of Canadians control 26% of the country’s wealth. That good fortune was thanks to living in a stable, safe country, with good infrastructure, healthcare, public education, and other public services. Requiring that the wealthiest of that 1% - basically the 0.1%, contribute a small percentage of the ongoing growth of their enormous fortunes, is a matter of principle, if we believe that the prosperity we create together should be shared together.

Equality: Wealth taxes also promote economic equality by redistributing wealth from the top 0.1% to the remaining 99%. Since the lowest-income Canadians have been losing wealth, while the top 1% has been getting vastly richer, due to an economic system and tax unfairness that advantages the few at the expense of many, it’s only fair that we should help one another.

Prosperity: Redistributing wealth from the super-rich helps the economy. Investment in public services, and income supports for those who need them, boost economic activity and consumer spending. It is in the self-interest of everyone, including the super-rich, to require those with the most to invest in our shared prosperity.

Democracy: Wealth taxes can help redress the disproportionate influence the super-rich have on government decision-making, news media, and economic trends, which undermines our democracy.

A vast majority of people support a wealth tax. A 2021 survey showed that 89% support an annual wealth tax paid on the richest Canadians, including 91% of Liberal supporters, 83% of Conservative supporters, 93% of NDP supporters, 96% of Bloc supporters and 95% of Green party supporters.

{Photo by Ramiro Mendes on Unsplash}