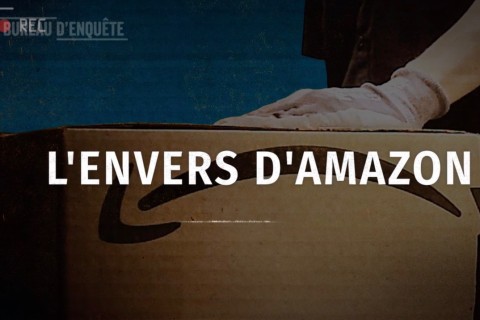 Amazon’s negligible tax bills, the millions of dollars it has received in tax breaks and subsidies over many years, the unfair advantage it thus maintains over local businesses, as well as its often-criticized labour practices and significant environmental impact, are explored in L’Envers d’Amazon, a new French-language documentary from Quebecor’s Investigative team.

To make the film, journalist Dominique Cambron-Goulet took a job at the company for six weeks, getting secret footage with a hidden camera, while another journalist did Amazon deliveries to experience the tough life of the people who come to our doors. The film also interviews a number of experts, including Toby Sanger, Executive Director of Canadians for Tax Fairness.

It turns out that in Quebec, the digital giant has been able to avoid paying tens of millions of dollars in taxes, and given what amounts to a 15-year tax break, according to the documentary, while benefiting from the Quebec government’s $100 million subsidy program to train employees, while we don’t even know how much tax the company paid last year.

Compared to companies across Canada, which pay a tax rate of about 20% on average, we learn that Amazon pays only about 7% globally, while paying zero taxes in the United States in 2017 and 2018, and while having collected almost no sales taxes anywhere it operates for most of its first 20 years in existence.

Sounds like a pretty sweet deal for the second-largest employer in the world, and a company that received over $15 million in contracts and purchases from the governments of Canada and Quebec - including through Amazon Web Services - since 2018, while Quebec’s publicly-run CDPQ pension fund invested $388 million into the company over the same period, the documentary reveals.

The revelations are in keeping with the tax dodging by Amazon founder and CEO, Jeff Bezos, the wealthiest person in the world, who has also been able to avoid paying any income tax in some years, as was revealed by ProPublica’s recent IRS leaks.

In an interview, Toby Sanger explains how it’s part of a larger tax-avoidance issue, with Canadian governments losing over $10 billion every year to corporate tax dodging by companies like Amazon. Unfortunately, we don’t have the figures to know what Amazon has paid across the country, since the federal government hasn’t told us if they’ve been audited, or even had their books reviewed in detail, says Sanger.

Canadian small and medium-sized businesses, especially retailers, wonder why these global multinationals aren’t subjected to the same taxes they have to pay. The unfair advantage is made worse in the current economic climate, when as many as 1 in 10 Quebec businesses are being lost due to the pandemic.

We’d be foolish to assume that the government’s inaction on ensuring tax fairness for companies like Amazon has nothing to do with their having hired lobbyists with strong connections to governments, who can advocate on their behalf in ways that taxpayers and local businesses just can’t, says Sanger.

Canadians for Tax Fairness (C4TF) campaigns to level the digital playing field with foreign multinationals. Increasingly, governments around the world are now publicly acknowledging that these companies don’t pay their fair share of taxes. France imposed a digital services tax despite American opposition. Canada will impose one as of January 2022, unless negotiations at the G20 and OECD this summer produce an agreement to tax multinational corporations differently.

“We need to implement a 3% digital services tax on large foreign multinational companies to level the playing field, as well as a global minimum corporate tax of 25%. Failure to confront the tax avoidance of large multinational corporations puts Canadian businesses at an unfair disadvantage,” said C4TF economist D.T. Cochrane.

You can view L’Envers d’Amazon (French only) on Club Illico here.