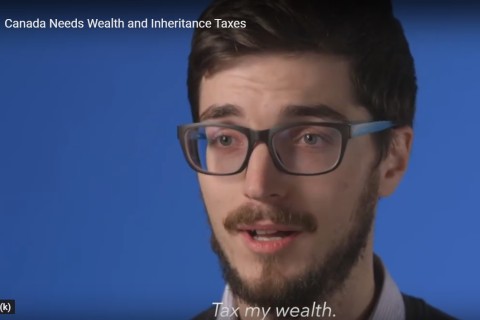 That’s the message coming from an organization of young Canadians who want to use their class privilege to improve equality across the globe. Resource Movement includes more than 200 people working towards the redistribution of wealth, land and power.

Today the group launched a campaign calling for Canada to introduce a wealth tax and inheritance tax to reduce inequalities and fund increased public services. Share their video and sign the petition here.

Their campaign comes at a pivotal time. Confronted with a climate emergency, the government urgently needs to fund a transition to a lower carbon economy, but it is facing a projected $26-billion deficit this year.

Fortunately, Canada can still afford these and other important investments like pharmacare and housing affordability by making the tax system more progressive.

In addition to closing tax loopholes, tackling tax haven use, and raising corporate tax rates, Canada should introduce a wealth and/or inheritance tax.

We are the only G7 country without an inheritance tax. The richest 87 families have 4,448 times more wealth than the average Canadian family. By 10:09 a.m., Canada’s top paid 100 CEOs have earned as much as the average worker does all year – a new record.

Inequality not only hurts us as a society, it negatively affects our economic well-being. We are better off as a country when resources are dedicated to helping all citizens, especially our most vulnerable. A wealth and inheritance tax can provide the necessary funding to make these critical investments.

Canadians for Tax Fairness estimated that a 45% tax on the inheritance/ estates of over $5 million would generate over $2 billion annually.

The Parliamentary Budget Officer estimated a wealth tax, such as the one proposed by the NDP in the last election, could raise nearly $70 billion over 10 years.

Wealth taxes have come under the spotlight in the past year in part due to the wealth tax proposed by US Senator Elizabeth Warren but also because more experts are acknowledging that the current tax system must change to address new levels of excess wealth.

The International Monetary Fund recently warned about rising wealth disparity and the need for higher taxes on the very rich. Even those at the top, including groups like the Patriotic Millionaires in the US, have called on the government to raise their taxes.

Polling in Canada also indicates support for a wealth tax. An Abacus poll found 67 percent of respondents endorsed a 2% annual wealth tax on household wealth of over $50 million while 17% were unsure and only 14% opposed. Support not only spanned across party lines, but generations as well. Those aged 60 and over were most supportive – a contrast to the younger demographic that makes up Resource Movement.

This broad support to tax the rich makes sense. Young and old have a lot at stake -- from ensuring a sustainable future to improvements to health care. Increased investments in areas such as social programs, education, training and infrastructure benefit both lower-income and privileged Canadians.

We support Resource Movement’s call to action today and we urge the federal government to consider the growing evidence that a stronger and more equitable society requires those who have the most to contribute their fair share.

Learn more about Resource Movement on their website. The group was also recently profiled in Macleans Magazine.