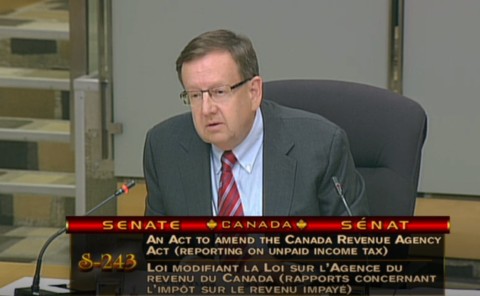 The House of Commons has struck down a Private Member’s Bill to combat international tax haven use.

Senator Percy Downe’s Bill-243 would have required Canada Revenue Agency to report on Canada’s tax gap – the amount of revenue that should be collected compared to how much the government finally gets.

Being able to identify how much is lost to tax avoidance each year is an important first step to addressing international tax haven use.  Canada’s own Parliamentary Budget Officer (PBO) acknowledged there isn’t enough data available to properly assess the cost of offshore tax havens or how best to fix the problem.

Canadians for Tax Fairness had been a long-time supporter of the Bill, which is also about citizens’ rights to know that their tax system is fair and transparent. It would have brought Canada in line with other jurisdictions such as the US, the UK and California.

The Fairness for All Canadian Taxpayers Act (measuring the tax gap to fight international tax evasion) was passed unanimously by the Senate and sponsored in the House late last year by Conservative MP Pat Kelly.

Downe had championed his Bill as a way of providing Canadians with a clearer picture of how big the problem is and where the government needs to step up efforts.

“If you try to cheat on taxes in Canada, your chances of being caught are extremely high. Your chances of being charged, convicted, going to jail, having your name posted on the CRA website are equally high. But the record on overseas tax evasion is the reverse. The last time I checked, there wasn’t one name there,” Downe pointed out in a speech from 2017.

Despite support from every other party, it was voted down by the government on May 29, 2019. The Liberals said they agreed with the Bill “in spirit” but that it wasn’t the right regulatory tool and raised privacy issues by forcing the CRA to provide data to the PBO. They also noted that since 2017, the CRA has already committed to publishing annual estimates of how much is lost to offshore tax avoidance.

The Bill’s defeat is disappointing. While the CRA has started reporting on the tax gap, having that mandate enshrined in law would be another measure the government could point to in their fight against international tax haven use. It’s especially surprising with a federal election just around the corner, that the Liberals would not adopt this law to ensure the reporting continues regardless of which party winds up governing later this fall.

To have the Bill rejected at this particular juncture is concerning. As Senator Downe has pointed out in recent op-eds, the CRA is failing to catch and prosecute international tax dodgers. More than three years after the Panama Papers, Canada has made little progress while other countries have recovered billions. If the agency is going to step up its efforts, it needs every resource and regulatory tool available.

The House’s decision came down the same week that CBC investigative journalist Harvey Cashore discovered the CRA has made a secret deal with rich clients involved in the KPMG Isle of Man tax scheme.

Canadians want transparency from their government and accountability for those who hide their wealth offshore. They also want to see the system is working and when it isn’t, they expect their elected representatives to endorse –not defeat—solutions.