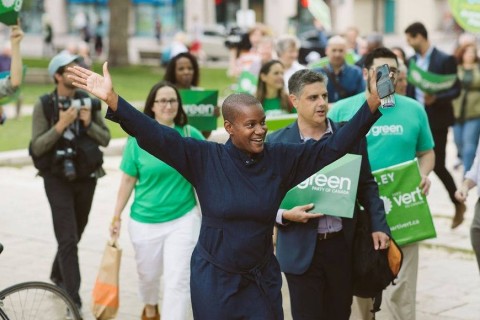 The Green Party has released its platform and it includes many of the tax fairness measures that C4TF advocates:

The Greens have now joined all the other major parties in agreeing on three key things:

Those who believe in economic justice can claim a victory for changing the way our parties talk about taxes.

Of course, the struggle goes on, since not all the parties’ plans are adequate to address the issue of inequality, and some of the plans fail to offer adequate fair tax measures.

However, the Green Party plan does a better job than many other current and past plans for tax fairness, even though many elements of their platform appear cobbled together from different sources without a strong understanding of the issues, or a more comprehensive appreciation of their impacts.

The Green Party is to be commended for making economic inequality a key issue in its platform. It includes the reduction of wealth inequality as one of its goals for a just transition to a green economy.

Tax measures aimed at corporations include a proposed increase in the corporate income tax rate to 21%. This is one percent higher than C4TF called for but we welcome advocacy for an even higher rate. The Green Party also calls for an end to business deductions for advertising on foreign digital platforms, which C4TF included in our Platform for Tax Fairness. They are the first party to take up this recommendation. Additionally, the party advocates ending the corporate meals and entertainment expense deduction, which the NDP has also advocated.

The Green Party’s plan for taxing wealthy individuals includes a luxury tax, in addition to advocating a one percent tax on fortunes over $20 million, and closing the stock options and capital gains loopholes. They call for the CRA to focus on locating hidden wealth rather than performing “random audits of ordinary Canadians.”

Their tax plan also includes a vacant properties tax. Unlike a similar tax just on foreign owners offered in the 2021 federal budget, the Green Party would also levy the tax on corporate residential owners.

On tax reform, the Green Party said they will create a Federal Tax Commission, which will be “based on the principle of progressive taxation.” They also note an important, worrying, and under-considered area: how to fairly tax cryptocurrencies.

MORE THAN A BIT OF CONFUSION

Unfortunately, the Green platform appears a bit shallow and occasionally confused on some issues. For example, tax measures for corporations include a “corporate tax on transnational e-commerce companies.” The intent appears similar to the application of a digital services tax, which all the other major parties advocate. However, it mixes in issues that appear to be associated with the expansion of the GST to digital products and services, as well the issue of profit-shifting.

Their platform says they would “impose a financial transactions tax of 0.5% in the finance sector,” but with no further details on how this would be applied. While we appreciate the intent, a one-line sentence doesn’t provide much confidence that they understand the real complexities involved.

The platform also says they will end offshore tax evasion “by taxing funds hidden in offshore havens.” If only it were so simple. That is the point of offshore havens: they are used to hide wealth. While we agree this is an important issue, and we agree with their call to increase funding for the CRA, overly simplistic assertions like this make their overall plan seem less serious.

The Green Party is also calling for increasing the federal carbon tax by $25 per year from 2022 to 2030, which would bring it up to $265/tonne by that year.  However, there’s no mention of whether they would also increase carbon incentive payments to offset the impact of price increases on households, nor is there any mention of how they would deal with large emitters, who pay a much lower effective rate under the current system.

Overall, the enthusiasm of the Green Party for tax fairness is more than welcome. During the only English-language debate, GPC leader Annamie Paul reminded Jagmeet Singh that the NDP is not the only party that would implement a wealth tax.

That enthusiasm can push the other parties to do more and amplify the importance of a fairer tax system. With all of the major parties recognizing that economic inequality is a problem, and widespread support for fairer taxation, it’s encouraging to see the Green Party help give fairer taxation greater prominence during the campaign.