How will Canada pay for our Covid-19 programs? 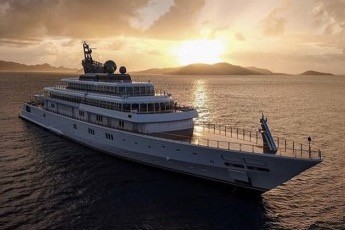 Photo: Billionaire David Geffen recently posted a picture of his yacht, where he is waiting out the Covid-19 crisis in luxury.

Emergency measures to deal with the economic fallout from Covid-19 will push this year’s deficit toward $200 billion, almost four times the previous record and by far the largest in Canada’s history.

Millions of Canadians, including thousands of businesses, are counting on these supports to stay afloat. The federal government’s wage subsidy program for employers will cost $71 billion alone, equal to $2,000 for every single Canadian. Prime Minister Justin Trudeau has called it “the largest economic program in Canada’s history.” The Canada Emergency Response Benefit for individuals announced last week is expected to cost $24 billion. And still, major gaps remain, with many precarious workers and students not covered by these programs. This crisis has highlighted the gaps in our social safety net, and how these can and should be fixed permanently. More support will be needed to keep individuals and employers on life support through this crisis, to revive our economy, and to build a better society when we come out of it.

But increasingly the question will be “How will we pay for it all?”

While the government could add this and future years’ deficits to the debt, that will mean higher debt interest payments going forward. We’re already leaving a steep environmental liability to future generations – that shouldn’t be compounded with larger fiscal burden for our children as well.  It could also be financed through the Bank of Canada, but the longer term consequences of that on inflation and the economy are uncertain.

The fact is our country has a lot of wealth: it’s just very unequally distributed, highly concentrated and not taxed adequately or fairly.

Covid-19 underlined the extent to which health and social services have been underfunded to adequately deal with a crisis of this magnitude. Heading into this pandemic, federal revenues as a share of the economy were already a full two percentage points lower as a share of GDP than their long-term average, equivalent to $50 billion on an annual basis. Much of that gap was due to the expansion of tax breaks and lower corporate taxes.

We must fundamentally question policies that have valued corporate profits over public services and rebuild a fairer economy that protects society from future risks.

A number of measures that could help pay for the costs of this crisis and for rebuilding our economy as we come out of it.  Here are a few:

Excess profits tax: Many have compared the difficult days ahead to fighting a war against the corona virus, extolling everyone to do their part.  During previous wars, the federal government applied an excess profits tax at rates of up to 80% or 100% for all profits in excess of 7.5%.

While thousands of small and medium enterprises will not survive the economic shock, some businesses will not only do well through the crisis but could use federal subsidies to further increase their profits. Introducing an excess profits tax would help Canada recover some of the public funds that will be used for private profits.

Wealth tax: The pandemic has exacerbated discrepancies across all lines, including but not limited to gender, race and class. It is the homeless, underpaid caretakers, frontline and gig economy workers who face the greatest risk while the privileged few can afford to wait the crisis out, contributing little in the way of labour and costs.

Billionaires, both in Canada and other parts of the world, have amassed such exorbitant amounts of wealth that they could singlehandedly fund aid efforts to assist their respective countries through the pandemic and still have millions leftover. A tax on the extremely rich  –which most Canadians endorse-- would ensure everyone contributes their fair share and no one is left behind.

Tax e-commerce giants: Mainstreet Canadian businesses –especially local restaurants, retailers and service providers-- are suffering and will see major losses this year. Many won’t survive, even with the government’s assistance.

It’s a different story for foreign digital corporations such as Amazon, Netflix and other e-commerce corporations. Their stock is up since the beginning of this year and poised to grow as more individuals and businesses move online. E-commerce corporations have grown increasingly adept at dodging taxes, in large part because governments have allowed them to.

The vast majority of the federal government's on-line advertising goes to Google and Facebook, among the largest international tax dodgers.  Justin Trudeau just announced the federal government will use another foreign tax-dodge corporation--Amazon.com--to distribute personal protective equipment across the country instead of publicly owned Canada Post or other Canadian alternatives.

Amazon.com has also been criticized--including by a worker who was then quickly fired--for not doing enough to protect their workers against Coronavirus, making it even more disturbing that the federal government is outsourcing their work to them.

In last year’s election, all parties agreed Canada should stop allowing digital giants to avoid paying taxes. Months later, we need to hold government and opposition to their promise. Now more than ever, foreign e-commerce companies should be required to pay taxes on their profits in Canada and subject to the same sales tax rules as domestic companies.

In a time of crisis and online misinformation, the role of local media becomes increasingly important, but the sector is up against multiple threats, with some papers already folding under added economic pressure from Covid-19 and advertising shifts to online platforms. The government has a responsibility to safeguard Canadian sources of news and finally hold foreign online platforms to the same standards.

Tackle tax havens: Four years ago, Canadians learned about the Panama Papers leaks, revealing billions of wealth stashed in offshore accounts. Other countries have made significant progress recovering lost revenues and prosecuting tax evaders, but Canada has lagged in action. The federal government must get tougher on individuals and corporations that use tax havens.

It should also strengthen the tax system and close many loopholes that allow corporations to avoid paying their share, including limiting interest deductibility and ending double non-tax agreements with tax havens.

Restrictions on bailouts for tax dodgers: Many of Canada’s biggest companies and sectors --including airlines and oil and gas—will receive significant government bailouts in the coming weeks. As Canadians for Tax Fairness has previously reported, many of these companies benefit from loopholes and tax havens to lower their overall taxes paid. The CEOs of these major corporations have also collected notoriously high compensation even as regular employees have been laid off or fought for decent wages. Public funding should not be used to bolster profits and executive pay for companies that have avoided contributing their fair share and that have laid off thousands of workers.

Tax transparency and accountability:  Federal and provincial government must publicly disclose details of how much funding they’ve provided to each individual corporation and how those funds are used—and recipients should be required to report and disclose where they’ve spent the money. Large corporations and multinationals are especially skilled at using subsidiaries in other jurisdictions to reduce their taxes. Any corporation that receives public resources should be required to report their finances on a country-by-country basis using globally recognized reporting standards.  These requirements wouldn’t slow down the flow of funds, but they would go a long way to prevent fraud and misuse, and to ensuring that our public funds are going where they’re supposed to.

Corporations that receive public funding should also be required to disclose their true beneficial owners, an area of corporate transparency where Canada has trailed its international peers but now has a chance to catch up.

While the government’s focus so far has quite rightly been on delivering critical aid to Canadians as quickly as possible, we also need to look to the future, and to how we can rebuild a stronger, more inclusive economy coming out of this crisis.