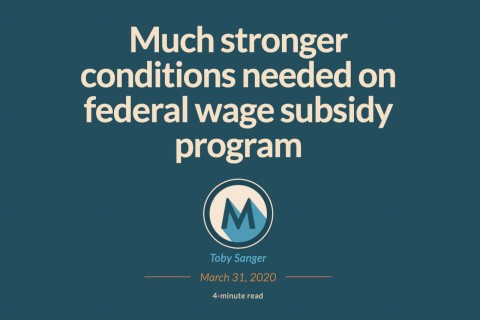 The federal government has announced it is prepared to pay wages subsidies of up to 75% of employee wages for all private businesses and other employers, including non-profits, partnerships and charities that expect a 30% drop in revenues, up to a maximum of $847/worker per week and $11,011 over the three months. The previously announced 10% wage subsidy was only to be available for smaller employers.

The CD Howe estimated that a 75% wage subsidy for private employers would cost $6.3 billion a week, which works out to about $80 billion over three months.  This amount works out to over $2,000 for each and every Canadian and is more than the federal government’s total major transfers to provinces, territories and municipalities for health care, social assistance, equalization and many other areas, which were projected to be just below $79 billion—and that’s for the whole year, not three months.

Many private companies, including property owners, banks and many others, are allowing their tenants and customers to defer their rent and other payments for a few months, and pay it later.  If they have a temporary 30% decline in revenues because of this, but with those payments to be made later, would they still qualify for this large public wage subsidy?

With the 75% wage subsidy, employers could receive more from the government than they suffer with a 30% revenue decline.  And there seems to be no condition that the companies pay their employees the other 25% of their wages, so the federal government could effectively take over the entire payroll costs for these employers.

In effect the federal government is offering to become paymaster for a large segment of the private sector for three months. This would amount to socializing workers pay, but not production or profits.

Canada’s program is similar to programs announced by New Zealand and Ireland, but it will be far larger in magnitude because we’re about seven times their size, and it is more generous.  Total payouts per worker in Canada max out at $11,011 compared to NZ$7,030 (equal to C$5,975) and €4,920 (or C$7,675) per qualifying employee in Ireland.

This has the potential to become one of the biggest and most expensive boondoggles in Canadian history.  We should be concerned not just about the large cost, but also because wasteful programs undermine confidence in government, and in government programs.

Given the massive magnitude of money involved and the opportunities for abuse, it is essential there be strong conditions to prevent abuse, and to prevent and recover funds from going to those who don’t need or deserve it.

We’ve waited decades for the federal government to introduce important social programs including affordable childcare, affordable post-secondary tuition, universal pharmacare, and many other programs that would cost far less than this.

It’s vitally important that the federal government help prevent job loss as a result of the COVID-19 crisis, but we absolutely need to ensure that this wage subsidy program doesn’t become a massive boondoggle that pads the profits of private companies with public funds that the rest of us will ultimately have to pay for.

[This Op Ed by C4TF Executive Director Toby Sanger was originally published in The Monitor on 31 March 2020.]