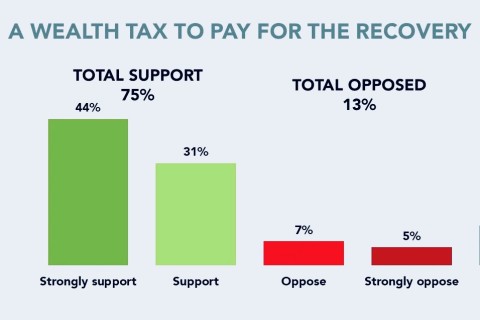 Three in four Canadians endorse a wealth tax to help cover rising COVID-19 costs, according to a new Abacus Data poll, commissioned by the Broadbent Institute.

The poll found 75% of respondents backed a wealth tax in the range of 1-2% on the value of assets of Canada’s richest individuals. An even higher percentage (81%) said companies receiving federal aid should not be allowed to use tax havens or spend funds on excessive salaries, share buybacks or increasing dividends.

Polling was conducted in early May when pressure began mounting on the federal government to follow countries such as France and Denmark, which have banned bailouts for corporations that use tax havens and engage in share buybacks and executive bonuses.

Canadians for Tax Fairness has urged the government to implement these and other measures to hold corporations accountable, protect public money from padding the profits of wealthy executives, and generate revenue at a time when increased spending is necessary to save lives and jobs.

While Conservative austerity champions, including former Prime Minister Stephen Harper, have been quick to fear monger about the cost of combatting COVID-19, polling found most Canadians don’t share that view. Nearly two in three respondents said government should spend whatever is necessary to rebuild and stimulate the economy, even if it means running large deficits for the foreseeable future.

As Canada’s deficit climbs, the government will need to find new revenue sources. A modest tax on the richest Canadians would help generate additional funding to help pay down the pandemic’s cost.

It’s not the first poll to find majority support for taxing the super rich. A 2019 poll commissioned by North99 found 67 percent of Canadians supported a 2% annual wealth tax on household wealth of over $50 million while 17 percent were unsure and only 14 percent were opposed.

Older Canadians were most likely to back a wealth tax, but support was widespread across political lines with 60 percent of Conservatives, 78 percent of Liberals and 80 percent of NDPers backing the wealth tax.

Polling has even found support among the very rich for a wealth tax.

Earlier this year, an organization of young Canadians who want to use their class privilege to improve equality across the globe, launched a campaign calling for a wealth and inheritance tax. The members of Resource Movement, who come from families belonging to the 1-10%, released a video asking the Canadian government to “tax my inheritance and “tax my wealth” to pay for priorities such as fighting climate change. We wrote about their campaign in February.

The world’s wealth gap has grown too large to ignore. COVID-19 has only worsened inequalities with a handful of billionaires profiting as millions of workers lose their livelihoods.

As governments face rising costs of containing COVID-19 and citizens grow increasingly dissatisfied with a status quo that has allowed a select few to prosper, the call to adequately tax profitable corporations and wealthy individuals has never been clearer.