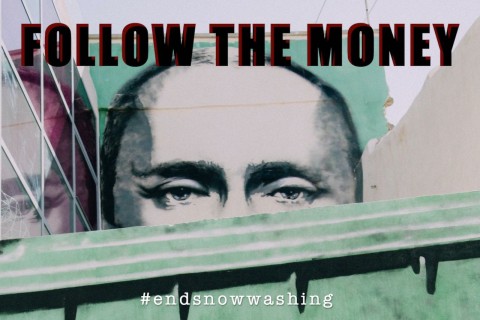 Today, in response to Vladimir Putin's ongoing attack on Ukraine, the End Snow-Washing Coalition, comprised of Canadians for Tax Fairness, Transparency International Canada, and Publish What you Pay Canada, sent the following letter to the Canadian government, urging immediate coordinated federal and provincial work on a publicly accessible, beneficial ownership registry system, to prevent nefarious actors from authoritarian regimes, including Putin's inner circle, from hiding the proceeds of crime in Canadian entities, while they engage in acts that violate international law or threaten the territorial sovereignty of other nations.

The letter, titled "Economic measures in response to Russia’s attack on Ukraine", dated Tuesday, March 1st, 2022, was addressed to:

On behalf of Publish What You Pay Canada, Transparency International Canada, and Canadians For Tax Fairness, we applaud new measures to target money laundering on behalf of Russian elites with relationships to President Vladimir Putin.

To make these measures more effective, we urgently recommend for Canada to implement a pan-Canadian, publicly accessible, beneficial ownership registry. This will make it much easier for law enforcement, financial institutions, and FINTRAC to uncover ownership or control interests which sanctioned individuals may possess.

Canada has imposed additional restrictions on key individuals linked to President Putin’s inner circle. [1] However, sanctioned individuals may be ultimate beneficiaries of Canadian numbered private companies or Canadian numbered properties via company structures including trust arrangements. Because the majority of these entities are regulated by provinces, we recognize the need for collaboration with provinces and territories.

For this reason, we recommend that Canada convene with provinces and reach an agreement to develop a centralized publicly accessible registry for corporate entities. This agreement can build from the 2017 Agreement to Strengthen Beneficial Ownership Transparency. Provinces can opt-in to a registry system that is constructed by the federal government. We expect that provincial governments will be inclined to agree to such a framework because they will not have to invest in resources to upgrade their own existing business registries.

The lack of a centralized registry with information on ultimate beneficial ownership allows nefarious actors from authoritarian regimes to abuse Canada’s legal system, launder money, evade sanctions, and finance terror. [2] Left unchecked, those individuals will continue to hide the proceeds of crime in Canadian entities while they engage in acts that violate international law or threaten the territorial sovereignty of other nations. [3]

Canada should seek the most effective means to prevent sanctioned individuals from abusing Canadian assets to store wealth. We recommend the federal government grant Canadian provinces the ability to seize properties owned by those on sanctions lists who would otherwise be nearly undetectable by conventional attestations.

We urge your government to reach an agreement with provinces and to begin work on a registry system as soon as possible.