Show us the money: Time for Trudeau to ante up to help save the climate 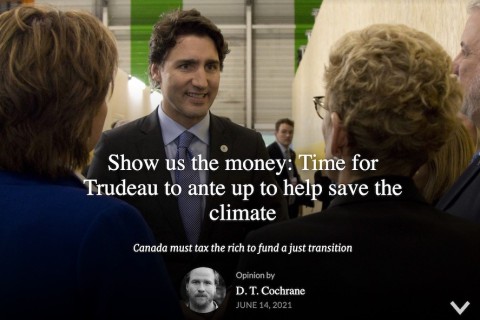 “On the economic front we lack not material resources but lucidity and courage.”

Those words are found in a 1940 pamphlet titled How to Pay for the War, written by pioneering economist John Maynard Keynes. Sadly, they apply to current discussions about the economics of the climate emergency. In fact, we are further behind in talks about an even greater threat than the U.K. was in 1940.

Keynes took for granted widespread acceptance that government spending would dramatically increase to wage war. Unfortunately, we have not yet accepted that governments will need to spend huge amounts of money to achieve a just transition to a green economy. That makes it much more difficult to answer the question of how to pay for it.

I was made aware that too many have their heads in the sand during a recent, frustrating appearance before the House of Commons Standing Committee on Industry, Science and Technology, where I was invited as a representative of Canadians for Tax Fairness to speak about economic recovery from the COVID-19 pandemic.

Importantly, every witness spoke about recovery in the context of the climate emergency. However, the discussion failed to address the massive elephant in the room: the inadequacy of the federal government’s response given the scale and scope of the crisis.

Consider the scale of the problem. Canada recently announced an updated target of reducing emissions by 40-45 per cent by 2030 relative to 2005 levels. But it still has no plan to get all the way there, and the latest figures show that emissions actually rose between 2017 and 2019. Further, the current target, which we are failing to meet, is considered inadequate by the International Panel on Climate Change, if the globe is to limit warming to 1.5 C.

Consider the scope of the problem. We know we need to retrofit our buildings, transform our transportation infrastructure, and rapidly reduce, eliminate, or innovate high-emission industries. But these sectors span a wide range of companies, and are too slow-moving to meet the urgent need for change. There is much expert knowledge capable of telling us how to do what needs to be done, but we need coordinated mobilization and support of that expertise.

At the same time, we need to protect people from the myriad, mounting harms of climate change, harms that risk being compounded by the necessary transformations of our energy systems. Jobs will disappear. Some goods and services will become more expensive or unavailable. People should not struggle because decades of overly cheap fossil fuels have malformed our economy.

The problem is massive and complicated.

In response to the pandemic, the federal government spent unprecedented amounts of money. Inexplicably, they are not doing the same to fund a proper response to the climate emergency.

Although the government of Prime Minister Justin Trudeau is the first in two generations to increase federal expenditures as a share of GDP, planned program spending is lower than under former prime minister Brian Mulroney. This is exemplary of what Seth Klein, author of A Good War: Mobilizing for the Climate Emergency, calls “the new climate denialism.”

The long decline in federal expenditures has been justified by belief in the free market. Profit-driven competition was supposed to deliver efficiency and innovation. Government was to be as limited as possible.

But we cannot compete our way out of the climate emergency. First, there is too much uncertainty about potential profits to entice companies to do what is necessary. Second, research and development need to be cooperative, and successful inventions shared widely. Finally, much of the work to be done, such as ecological rehabilitation, has no source of revenue, let alone profit.

The federal government must do as it did during World War II and spend whatever it takes to make the necessary economic change.

Keynes’ plan to pay for the war was designed to ensure the greatest availability of resources for the war effort. However, it was also intended to reduce inequality and to maintain economic stability through low inflation. Similar motives ought to be part of our climate plan.

Money spent by government to transition our economy becomes someone’s income. That may drive demand for certain goods and services beyond supply capacity, leading to inflation. Households may compete with government for goods needed in the climate fight. To lessen those pressures, governments can use progressive taxation.

More importantly, taxes are necessary to reduce the unearned increase in wealth at the top of our economic hierarchy. We have a trickle-up economy. As the money spent by the government circulates, portions are diverted as profit and interest, which accrue with asset owners.

Asset ownership is highly unequal, so the rich get richer, just because they are already rich. That wealth is a source of power, giving the rich excessive influence over government, which is part of the reason the current climate response is so anemic.

The crisis is huge. More spending and more taxes are unavoidable if Canada is to achieve the scale of coordinated effort required for a just transition.