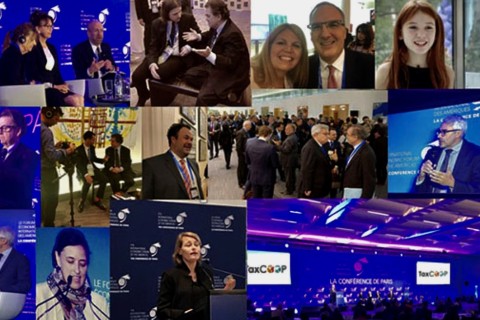 How pleased I am to talk with all of you at Tax COOP - this really excellent conference. I wish we were all there in person, but on the positive side, this on-line conference has enabled more people from around the world to be involved on these critical global issues.

The pandemic has really underlined how incredibly important government and public services are—health care most crucially, but also public support to individuals and businesses that has prevented a depression—and also how interconnected we are, and how we should be in this all together.

And as Joe Stiglitz said earlier, governments are also going to need much more revenue to pay for the costs of this crisis, and to rebuild back better in the recovery, when it comes.

Through the pandemic we’ve also seen an acceleration of the very disturbing trends of inequality and corporate concentration that we’ve been seeing over the past few decades—a reminder that we’re not actually all in this together. Some—a wealthy few, and large corporations—have not only been doing much better for decades, but they are also doing much better through this crisis.

Over the past few decades, we’ve seen growing corporate concentration around the world: greater market power amassed by large corporations across many industries. And during this pandemic, it’s the largest corporations like Amazon whose stock prices have escalated the most and have increased their profits, while smaller mainstreet businesses are barely holding on.

These trends are related because by far the largest portion of individual wealth at the very top comes from business and corporate holdings.

Regressive tax measures have played a major role in this, including lower rates of tax on corporations, cuts in other business taxes, tax loopholes, lower taxes on capital, lower taxes on wealth, and the ability of the wealthy and larger corporations to avoid taxes in many different ways.

It’s the largest corporations in the world that have been most able to take advantage of tax havens, international and domestic forms of tax dodging. They pay tax at single digit rates, often lower than small and medium sized domestic competitors.

And when all taxes are considered, the top 1% and billionaires on average pay lower rates of tax than all other income and wealth groups—so our overall tax system isn’t progressive, it is actually regressive.

Unless we take active steps to reverse it, we’re going to experience even greater concentrations of wealth and power: greater corporate concentration, more oligarchs, more strongmen in power, and a whittling away of our democracies, because as the OECD has recognized and people like Donald Trump have shown, “wealth begets wealth”.

I heard earlier, from some participants at this summit, that old and discredited myth that countries need to keep business and top income tax rates low in order to grow the economy. In Canada, over the past two decades rates of business investment have declined in lock-step with lower corporate tax rates: the exact opposite of what was supposed to happen!

Even the IMF, OECD and broader majority of mainstream economists now recognize this, and agree that greater equality and stronger economic growth go hand in hand. It has been good to see the IMF and its chief economist say last week that, while new revenue measures during this crisis will be difficult, governments could consider raising progressive taxes on more affluent individuals—including wealth taxes—and changes to ensure firms pay taxes commensurate with their profitability.

I absolutely agree we need fundamental reform of international corporate taxation and broad progressive domestic tax reform but immediate priorities for tax reform should be:

These and other progressive tax measures would make the tax system much fairer, they’d raise significant revenues and they’d be good for the economy: a win-win-win.