Tax the Rich: How Tax Fairness Will Make a Better Canada 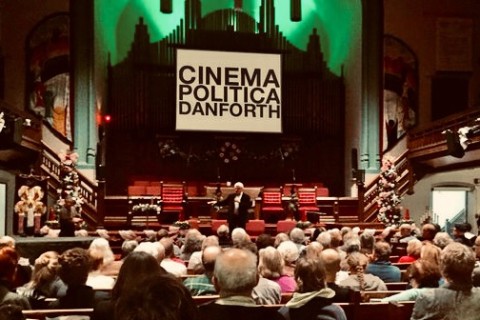 [This post has been adapted from a presentation by Canadians for Tax Fairness Director Toby Sanger at an event organized by CinemaPolitica Danforth and the Toronto-Danforth NDP Riding Association; co-participants included the celebrated journalist and Panama/Pandora Papers insider Marco Chown Oved, and Katrina Miller,  then the Broadbent Institute’s Programming Director, and later also an Executive Director of C4TF.]

For decades, until just recently, the word "tax" was considered a dirty word in politics, even among those supposed to be progressives.

This was due to the extreme success of right-wing conservative and business lobbies, and in particular people like Grover Norquist, who founded Americans for Tax Reform 36 years ago, in 1985.

Norquist was successful in getting 98% of Republican congress members and a few Democrats to sign the "TaxPayer Protection Pledge" to oppose any and all increases to marginal income tax rates for individuals and business, and any net reduction in deductions and credits. They were very focused on making taxes flatter, and more regressive.

Norquist is also famous for saying that he wasn’t in favour of abolishing the government - just shrinking it down to the size where we can drown it in the bathtub.

In Canada, this project was taken up by the Canadian Taxpayers Federation, Fraser Institute, CD Howe Institute, and at least half dozen other right-wing research and business advocacy organizations, all bankrolled to the tune of millions of dollars by Canadian and US wealthy and corporate interests.

Prime Minister Harper who claimed he was an economist, but said he thought all taxes were bad taxes, which is absolutely ridiculous to say for anybody who had a smidgen of education as an economist.

It became quickly apparent that unless you were advocating for a tax cut or credit, there was no point in going into pre-budget consultations with Harper's government. That's all they were interested in.

Because tax was considered a bad word and deficits considered even worse, this anti-tax propaganda severely constrained what we could do, or even imagine that we could do as a society. That's because we accepted their propaganda and frames, accepting and using terms like the "tax burden".

As a result, during Harper's tenure, the federal government's revenues and spending as a share of the economy shrank to almost the lowest in 70 years -  lower than it was before introduction of the Canada Pension Plan, Medicare, and other government programs that we now see so critical to our lives.

Federal corporate tax rates were cut in half from 1999 to 2015, down to a rate much lower than they had been for much of the 20th century. And top marginal tax rates were also slashed, from where they’d been until the 1970s at over 70%.

These taxes, and taxes on investments and capital gains, were slashed by Liberal and Conservatives governments alike, claiming that this would lead to increased investment, more economic growth , more jobs, and higher wages.  But nothing of the sort happened.

Instead, we had lower rates of investment, wage stagnation and increased inequality. It was a multi-hundred billion experiment that simply failed.

Nowadays, governments are admitting many of those mistakes. Even the Conservative government in the UK has pledged to increase Corp tax rates recently as did US president Joe Biden.

END OF THE TRICKLE-DOWN MYTH

It may also be hard to believe, but it's only about a dozen years since trickle down economics was so widely discredited in the mainstream, in the fall-out of the financial crisis of 2008/9.

During the Occupy Wall Street protests of ten years ago, people around the world protested the austerity that governments like the Harper Conservatives had implemented after the financial crisis, making ordinary people pay for the costs of a crisis caused by the wealthy financial sector.

We recognized then, as now, that a progressive tax system is very important for reducing inequalities, but it is also very important because it generates revenue to pay for public services, and these services themselves are what really reduce the impacts of poverty and inequality on people’s everyday lives.

A study done by Hugh Mackenzie and Richard Shillington about a dozen years ago, called Canada's Quiet Bargain, found that the services received by about 80% of Canadians were more valuable to them than the taxes they actually paid for those services. In other words, 4 out of 5 Canadians are getting more than their money’s worth when they pay taxes.

Years ago, right-wing think tanks came up with the idea of a “tax freedom day” as a way to smear taxes, and make misleading claims about how much tax Canadians really pay. It usually lands around the month of May. Though if you calculate it honestly, most households would mark such a day much earlier in the year. Meanwhile if we calculated a Corporate Tax Freedom Day, it would fall in the first half of January. So, if you think about a public services day, based on the dollar value of the public services that our taxes pay for, that would land way after tax freedom day every year. And, given that public services are generally delivered more efficiently than private services, the real value of them is even greater, so we’d have to push that date even later in the year.

Now, some taxes are more progressive than others. For instance, sales taxes and payroll taxes are paid mostly by people with less wealth and income, which is why we call them regressive. But because most Canadians get more than their money’s worth out of paying taxes, even increases to such relatively regressive taxes can ultimately be progressive, if they support expanded public services. That said, Canadians for Tax Fairness does not advocate regressive taxes because decades of regressive tax changes, and other factors, have made poverty and inequality so bad.

My calculations using figures from Crédit Suisse and in our report from last year It’s time to tax extreme wealth inequality, show that it is only the top 1% of Canadians - those with the most wealth, that has increased its share of total household wealth in Canada, from 2010 to 2019 - in the decade after Occupy Wall Street. All other groups in society reduced or only maintained their share of household wealth. And only the top 1% increased theirs and they increased it from 18% to over 26%.

The regressive tax measures brought in by Conservative and Liberal governments were very successful at creating greater inequality - but certainly not at boosting the economy, or in trickling down.

And, as the Spirit Level books have shown, more unequal societies are worse for everyone, including the wealthiest. So we have people like Warren Buffet, Bill Gates, and groups of wealthy progressives like Patriotic Millionaires, and the children of those families in organizations like Resource Movement, calling for governments to tax the rich, tax them more.

Despite these calls from all wealth demographics, and the massive public support for fairer taxation across all political lines, governments still aren't acting.

What we do know is that the public support is there, the solutions are available, and it’s a question of putting those options clearly on the political table, and giving the public the language they need to pressure our governments to act. And that’s where Canadians for Tax Fairness comes in.

OBJECTIVES OF CANADIANS FOR TAX FAIRNESS

We believe, as the subject of tonight’s discussion spells out, that fair taxation can make a better Canada, and that taxing the super-wealthy is an important first step, since we know the richest Canadians have fortunes so large that their lavish lifestyles would be unaffected by such taxes, and the Canada those taxes would help develop would mean they too would live in a safer, more beautiful, more prosperous country.

To achieve that aim, our organization, Canadians for Tax Fairness, has focused on a few key areas. These include:

Both in the 2019 election, and in this year's federal election, we've produced a "Platform for Tax Fairness" to detail what we would like parties to include in their election platforms, and we put out fact sheets on some of the major issues. We also analyze party platforms on our website, have a monthly newsletter, and occasionally ask people to write to their MPs and government ministers - what we call “e-actions”. Our work is financed by donations.

And perhaps it's a coincidence, but we seem to have been very successful. The tax measures included in party platforms, especially of the NDP, but also to some extent the Greens and Bloc, in these past two elections have been by far the most progressive that I've seen in over 40 years.

The measures we proposed could have raised over $90 billion dollars every year. And my estimates are on the cautious side; invariably estimates later done by the Parliamentary Budget Office tend to be higher.

These could of course pay for a lot, including about:

Instead of having our noses stuck to broken-down pavements, as Tommy Douglas used to say, we can and should "dream no little dreams." And in the spirit of Tommy Douglas, we can and should make these dreams a reality by paying for all these important public services with progressive taxes. It certainly isn't too late to build a better world; in fact it is long past time that we should be doing so!