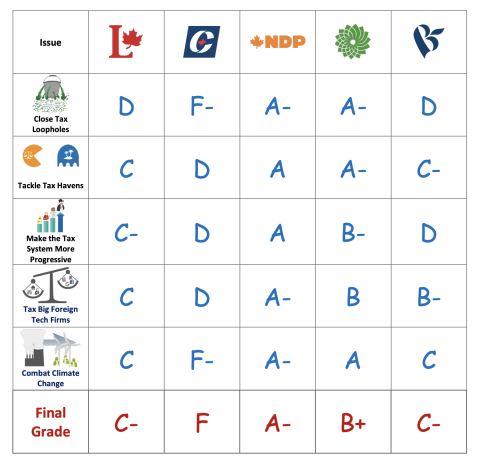 The idea of a Fair Tax Report Card began when, in spring 2019, C4TF published a 2019 Platform for Tax Fairness, showing how the federal government could raise an additional over $40 billion annually by implementing a number of moderate fair tax measures. Doing so would have brought federal revenues closer to, but still below,their long-term average as a share of the economy. These funds could also have been used to improve public services for all Canadians, to alleviate poverty in Canada and abroad, to make our tax system fairer for ordinary Canadians, and to invest in the transition towards a greener and more sustainable economy. For instance, each $10 billion in additional revenue could provide funding for: a national pharmacare program; $10 a day universal childcare; retrofitting 2 million homes; eliminating university and college tuition; and 40 million stays in hospital beds.

Our supporters expressed most interest in five of the areas explored by the Platform:

So, during the Fall 2019 election campaign, C4TF published factsheets on each of these issues, and produced this Report Card, grading each Party’s election platform based on how effective it would be to move Canada towards fairer taxation, specifically relating to those issues.

The idea was a tool to address what economists Emmanuel Saez and Gabriel Zucman call, as their book title, The Triumph of Injustice - how regressive tax systems are increasingly a major cause of today’s disturbing levels of inequality. We hoped it would help voters make an informed choice at the ballot box, while many ordinary Canadians struggle to keep up as most of the income gains in recent years have gone to top incomes, and to large corporations who increasingly dominate economic and political agendas.

As the results below show, though no party got a perfect score in any category and most parties at least paid lip service to some important issues, we were most impressed by the NDP and Green Party proposals on progressive tax measures - some of the most important proposals that have been discussed in decades.

Canada’s tax system includes various regressive tax loopholes that allow the wealthy to avoid taxes, with many paying much lower rates of tax than ordinary working people—or no tax at all. In our Platform for Tax Fairness and our Close Tax Loopholes factsheet, we highlight five regressive tax loopholes: the stock option deduction, capital gains, business meals and entertainment expense deduction, corporate dividend tax credit, and TFSAs. Closing these could save the federal government over $16 billion annually.

Canada loses at least $8 billion annually from international tax dodging by corporations and the wealthy. Our Platform for Tax Fairness and Tackle Tax Havens factsheet outline a number of the measures the federal government should take to seriously deal with this problem.

Canada’s tax system has become far less progressive in recent decades with cuts to top income tax rates, deep cuts to corporate tax rates, and the expansion of loopholes—all of which have contributed to the top 1% now paying a lower overall rate of tax than all other income groups, including the poorest 10%. Our Platform for Tax Fairness and Progressive Tax Rates factsheet propose a number of ways to restore progressivity to the tax system, including by increasing the top marginal tax rate, increasing corporate tax rates, applying a tax to wealth and inheritances, and reducing incentives for corporations to pay their CEOs multimillion dollar compensation.

The Canadian government allowed some of the largest corporations in the world—Google, Amazon, Apple, Facebook, Uber, Netflix and others—to get away with paying little or no taxes on their sales and profit from Canada. These tax preferences for big tech not only cost billions in lost revenue annually, but are highly unfair to competing Canadian companies and workers, and are profoundly damaging to our media and cultural industries. Our factsheet specifies what the federal government needs to do to Level the Digital Playing Field, including: collect GST/HST on imports of all digital services, apply corporate income tax to the profits of foreign e-commerce companies associated with their business in Canada, eliminate the ability of businesses to deduct the cost of advertising on foreign internet platforms, apply specific revenue taxes to large tech companies, and enforce existing laws that require foreign companies to collect and remit sales taxes to Canada.

We need to use every tool available to address climate change, including carbon taxes and other fiscal measures. Carbon taxes work by putting a price on pollution while also raising funds to invest in complementary measures, such as a Green New Deal. But carbon taxes must be broad-based, progressive and combined with a wide range of complementary measures, including Just Transition measures for those whose jobs will be affected. Our Combat Climate Change fact sheet recommends key ways the federal government’s carbon pricing plan should be strengthened including by: applying the carbon price to all emissions from large emitters, introducing carbon tariffs on imports from countries not taking sufficient action on climate change, and making payments to households more progressive and more visible.

Ultimately, the NDP’s more progressive income and wealth tax policies nudged out the Greens, whose platform and financial plan contain a number of inconsistencies. The Liberals’ tax fairness commitments were disappointingly less ambitious than last election. While the Bloc is sometimes progressive, its platform includes only a few tax fairness measures. The Conservatives are on the opposite end, proposing many tax changes, the vast majority of which would most benefit higher incomes and corporations.