Submission: Recommendations for the 2021-22 Federal Budget 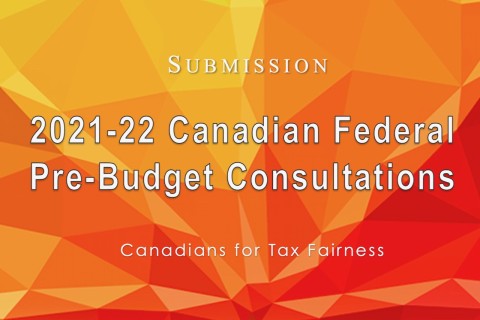 Submission on Pre-Budget Consultations for the 2021/22 Federal Budget, for the House of Commons Standing Committee on Finance, prepared by Toby Sanger, Executive Director, Canadians for Tax Fairness, 6 August 2020.

Faced with one of the worst economic and health crises of the century, Canada has remained resilient. Our public health system and social programs, including the emergency benefits that governments quickly rolled out in the early weeks of the pandemic, have helped to contain the virus and soften its blow on the economy.  COVID-19 demonstrated that investments in public services save lives and prevent a crisis from developing into a catastrophe. But it also exposed large gaps in our social security system, from long-term care to employment insurance for contract workers. Canada’s recovery plan should address these gaps and ensure everyone is protected in future emergencies.

We can afford to make these investments and restart the economy. Interest rates are low and polling shows the majority of Canadians want the government to spend what it must to overcome the crisis. The tax system has a significant role to play in our recovery. It should raise revenues to pay for improved public services, help these supports reach Canadians who need them most, and require those who can most afford it to contribute their fair share.

The federal government should rebuild the economy by focusing on the following areas...

There will be calls to cut spending to reduce the deficit, but austerity measures will only set us back and worsen our economic outlook. Dollar for dollar investments in public services create more jobs and provide a stronger boost for the economy than tax cuts. Now is the time to expand social programs that will help get Canadians back on their feet, back to work and improve their quality of life.

Universal childcare: The crisis has disproportionately hurt women, reversing decades of employment gains. Significant investments are needed to provide safe, quality and affordable childcare to enable mothers to return to work and to provide children with a stimulating start in life.

Pharmacare: As Canadians watch the worsening situation south of the border, the return on public health investments has never been clearer, but the pandemic has also shown that Canada’s healthcare system is not truly universal. Many remain without coverage for prescriptions, dental care and mental health support in a time of crisis. The federal government should make it a priority to fill these gaps in care.

Long-term care: Canada’s health system has also failed to protect our most vulnerable: seniors in care. Multiple studies have shown that COVID-19 mortality rates were higher in for-profit long-term care homes than in publicly-owned ones. Bringing long-term care fully into the public system would ensure seniors’ lives are prioritized over private profits and ensure better conditions for workers too.

IMPROVE DELIVERY OF SUPPORTS THROUGH THE TAX SYSTEM

Improving benefits, social programs and other services are an important piece of Canada’s economic recovery, but to make these investments count, we need to improve how support reaches the individuals who need them most.

Extend benefits for low-income canadians during the pandemic: One in 10 individuals in Canada do not file their taxes and therefore do not receive important support that is integral to the government’s anti-poverty strategy. COVID-19 has further complicated the situation for Canadians who rely on community-run volunteer tax clinics to file their taxes. Many of these individuals, such as seniors, Indigenous and remote communities, or people with disabilities, are also most susceptible to the virus. The federal government should ensure that benefits continue to be delivered for as long as it remains unsafe for vulnerable Canadians to receive in-person support to file their taxes.

Modernize and simplify tax filing: Other countries including Denmark and Norway have reduced the cost and frustration of tax filing by providing automatic tax filing for citizens. This crisis is an opportunity for Canada to also move to automatic tax filing beginning with the most vulnerable tax filers and then extending this option to all Canadians. The CRA should receive additional resources to interact with marginalized communities, who experience the tax system as “systematically oppressive,” as was noted in a recent report by Canada’s outgoing Tax Ombudsman. These should include additional staff and training to service more vulnerable populations and increased resources for community tax clinics. During this crisis, federal public servants have worked tirelessly to design and deliver major new programs of emergency aid to millions of Canadians highly efficiently. This impressive feat is a testament to the importance of adequately funding the public service and shows much more can be achieved through the tax and benefit system.

Canada continues to lose billions in revenues from tax avoidance and evasion through tax havens and tax loopholes in the tax system that enable some of the wealthiest Canadians and corporations to pay lower overall rates of tax than the poorest. While the federal government has been successful in delivering hundreds of billions in pandemic assistance, the resulting debt and cost of financing the recovery will eventually have to be paid for—and that will require higher taxes. An inclusive recovery will require everyone to pay their fair share. The government can raise revenues while also reducing inequality by strengthening measures to prevent and punish tax haven abuse, eliminating regressive and ineffective tax loopholes, and introducing a wealth tax on the super-rich.

Tackle corporate tax dodging and use of tax havens: Canada loses at least $10 billion annually to corporate use of tax havens, although the actual amount could be at least twice as much. Tax havens not only cost billions in lower taxes, they worsen inequalities and create an unfair business environment, providing large multinational corporations with a significant tax advantage over smaller firms. To address this problem, the federal government should:

Establish a beneficial ownership registry: But there can be no tax justice without corporate and tax transparency. Canada should also adopt the recommendations of financial crime experts and establish a publicly accessible centralized pan-Canadian registry of the beneficial owners of private corporations to combat money laundering, tax evasion, and other illicit activity. Jurisdictions such as the UK have already reaped the rewards of a public registry.

Country-by-country reporting: The federal government should also require large multinational corporations that operate in Canada to publicly report their taxes paid on a country-by-country basis, and publish how much large corporations (annual income of over $100 million) actually pay in corporate and other federal taxes, as is done in Australia.

Ensure e-commerce giants pay their fair share of tax: The pandemic has been especially hard on mainstreet and retail businesses, many of which were already struggling before COVID-19. Tens of thousands are likely to go under, causing extensive job losses, while many of world’s largest e-commerce corporations have seen their revenues and profits soar. The federal government continues to provide foreign multinational e-commerce companies such as Amazon, Google, Facebook and others with billions in tax preferences, giving them massive and unfair advantages over Canadian companies. We’re glad that all parties agreed during the last election that Canada needs to take steps to address this inequity, and action is long overdue. In this coming budget, the federal government must finally:

Excess profits tax: While most businesses are struggling, a handful of others are doing very well, and increasing their market share. Just as it did during previous world wars, the government should consider an excess profits tax on large corporations that have significantly profited during the pandemic.

Close tax loopholes: Canada’s complex tax system contains a myriad of tax loopholes and expenditures that overwhelmingly benefit higher income and wealthy Canadians. We are glad that this government has promised to conduct another review of tax expenditures “to ensure wealthy Canadians do not benefit from unfair tax breaks”—and to make it public this time. Top priorities here should include:

Establish a wealth tax: Other tax reforms are necessary to narrow a widening wealth gap between the super-rich and other Canadians. A recent study by the PBO showed the wealthiest 1% have more than a quarter of all wealth in Canada. While most Canadians are struggling through this pandemic, many billionaires have seen their wealth grow even more. Canada is one of the few G20 nations without wealth, estate or inheritance taxes. We should take steps to both reduce these inequalities and raise revenues to pay for the recovery.  An annual wealth tax at a modest rate of just 1% on fortunes of over $10 million would generate over $10 billion annually. Three-quarters of Canadians polled, including majorities from all political parties, support having a wealth tax.

INVEST IN AN INCLUSIVE GREEN RECOVERY

In this recovery, we must also take action to address the other global crisis -- climate change. The progressive tax reforms we outlined in this document can help fund a just transition to a lower-carbon economy and protect Canadians from the disastrous effects of climate change. While millions lost work in the pandemic and some industries may never fully recover, the government now has an opportunity to help workers regain quality employment in a way that promotes healthier communities and diversifies the economy. The government should work closely with municipalities and provinces to prioritize job creation in areas such as public transit, building retrofits, and renewable energy.

Additional revenues to pay for this transition can be raised by strengthening the government’s carbon price framework coverage of large emitters, which only pay 10% of the government’s total carbon revenues, despite being responsible for over 40% of Canada’s total emissions. The cap and trade system should be converted to a transparent carbon tax with border adjustments, applying tariffs to countries that don’t take sufficient action on climate change and providing rebates to Canadian exporters to those countries. Putting an end to fossil fuel subsidies would also help fund our transition to a safer, more sustainable economy.