Report: Analysis of the 2022 Federal Budget

Budget 2022 has good news for corporate transparency, but only a fraction of potential revenue will be raised from the most profitable corporations, richest individuals and biggest polluters, while leaving major tax loopholes wide open.

Budget 2022 took some steps in the right direction for tax fairness, especially for corporate transparency. However, it will raise only a fraction of potential revenue from the most profitable corporations, richest individuals and biggest polluters, while leaving major tax loopholes wide open.

Rather than fulfilling numerous Liberals promises on fair taxation made since 2015, Budget 2022 makes more promises to “review” and “study” ways to solve problems for which there are  obvious and effective solutions that could be implemented immediately.

Pandemic profits tax on banks and insurance companies: Canada’s financial sector had record-breaking profit margins in 2021 at 22%, making a whopping $141 billion in profit. 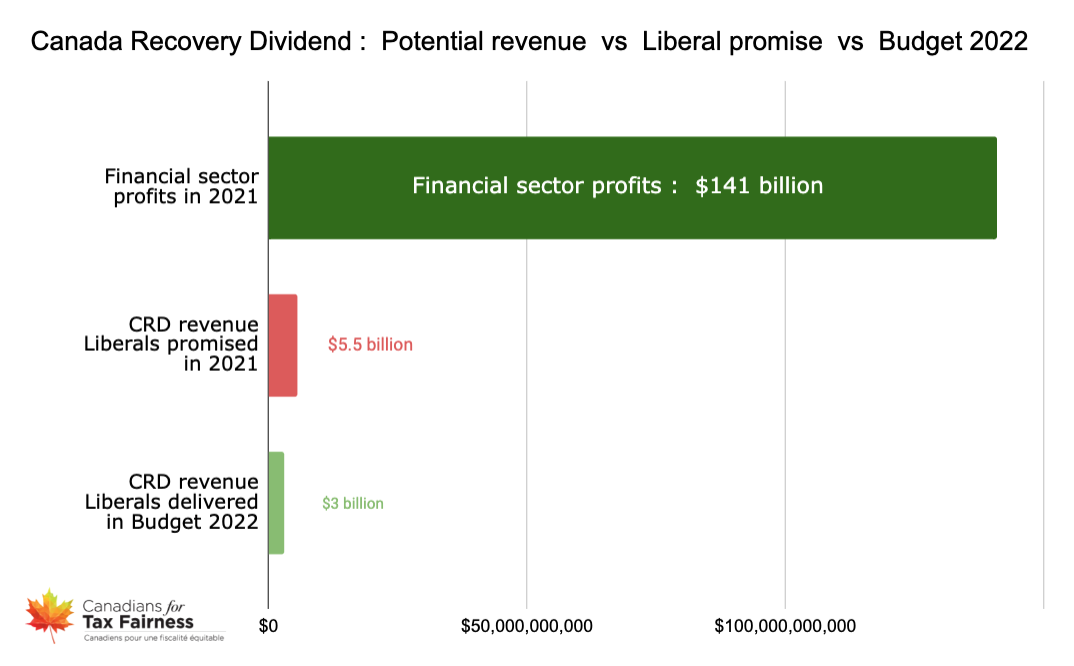 Small increase on income tax rate for banks and insurance companies: Corporate tax rates have gone from over 40% in the 1980s to an all-time low of 15% in 2022, costing Canadian governments $1.1 trillion dollars since the year 2000. Increasing the corporate tax rate to just 20% would raise an additional $8 billion a year. In 2021, the Liberals promised to raise the income tax rate on big banks and insurance companies from 15% to 18%, which would raise an estimated $1.2 billion per year. 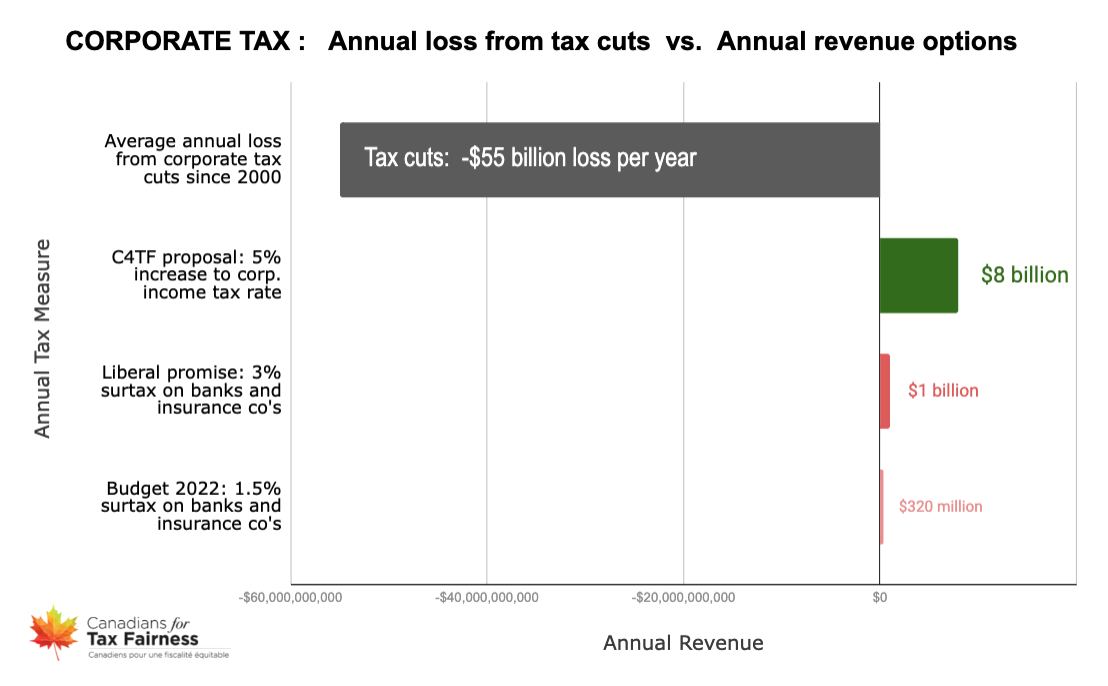 No general increase in the corporate income tax rate: The surtax on the banks and life insurance companies raises their overall tax rate to 16.5%. That is still historically low. The government needs to end the experiment with ultra-low corporate tax rates. An increase to 20% would raise an additional $8 billion in revenue per year.

No strong support for the digital services tax (DST): Some of the biggest, most profitable, digital giants like Amazon pay zero or almost zero corporate income tax in Canada. The Liberals promised a DST on digital giants with an estimated annual revenue of at least $1 billion.

2. Taxing the wealthiest in Canada

Weakened luxury goods tax: There are lots of good ways to implement a tax on luxuries most of us can’t afford. The Liberals promised to tax sales of luxury vehicles over $100,000, bringing in an estimated annual revenue of around $650 million.

No minimum effective tax on very high income: While almost everyone from nurses and teachers to small business owners pay at least 15% federal income tax, thousands of wealthy Canadians pay little to no income tax at all. The Liberals promised to impose a minimum 15% effective tax rate on the top 1% of earners (those making over $222,600), which would raise an estimated $400 million per year.

No wealth tax:  C4TF has proposed an annual wealth tax that would raise an estimated $20 billion per year, and a number of other countries have effective wealth taxes. 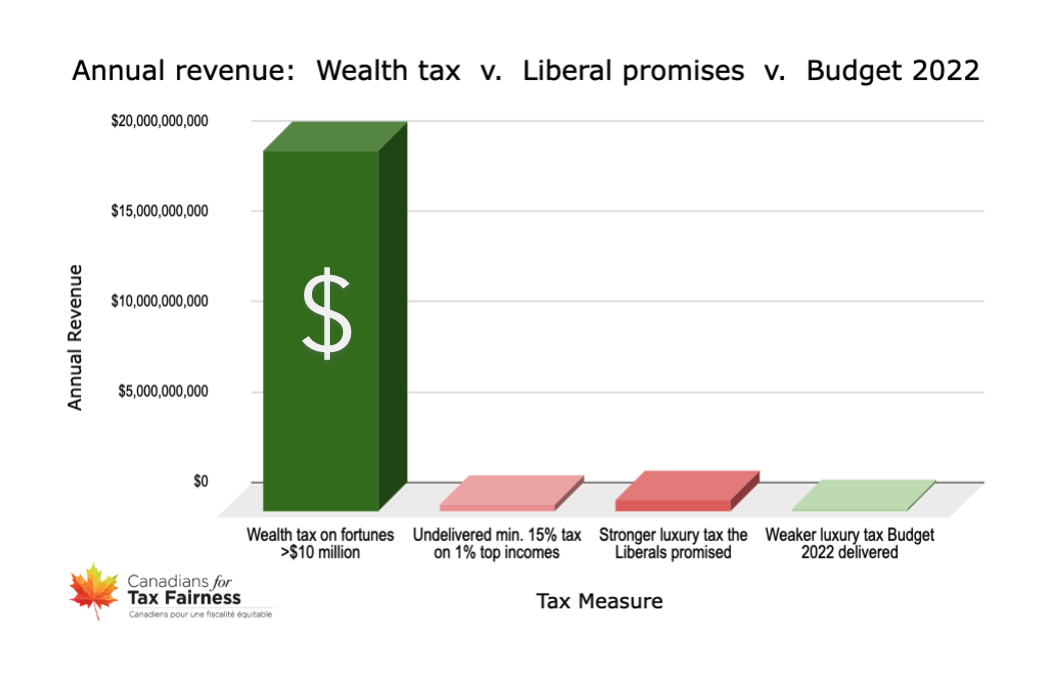 Closing a few smaller loopholes: C4TF has identified $30 billion worth of loopholes used by the ultra-rich to avoid paying taxes that could be closed.

“Reviewing” the tax exemption for real-estate investment trusts (REITs): REITs have been exempt from corporate income tax since 1995. This unfair tax advantage is distorting the housing market and making homes unaffordable. The Liberals promised to “review the tax treatments” of the “large corporate owners” of residential housing including REITs, and “curb excessive profits.”

No closing up billions of dollars in other tax loopholes: In 2015, the Liberals promised to eliminate $3 billion worth of tax loopholes. C4TF proposed ways to make that $30 billion. Budget 2022 needlessly leaves in place most of Canada’s worst tax loopholes, including: 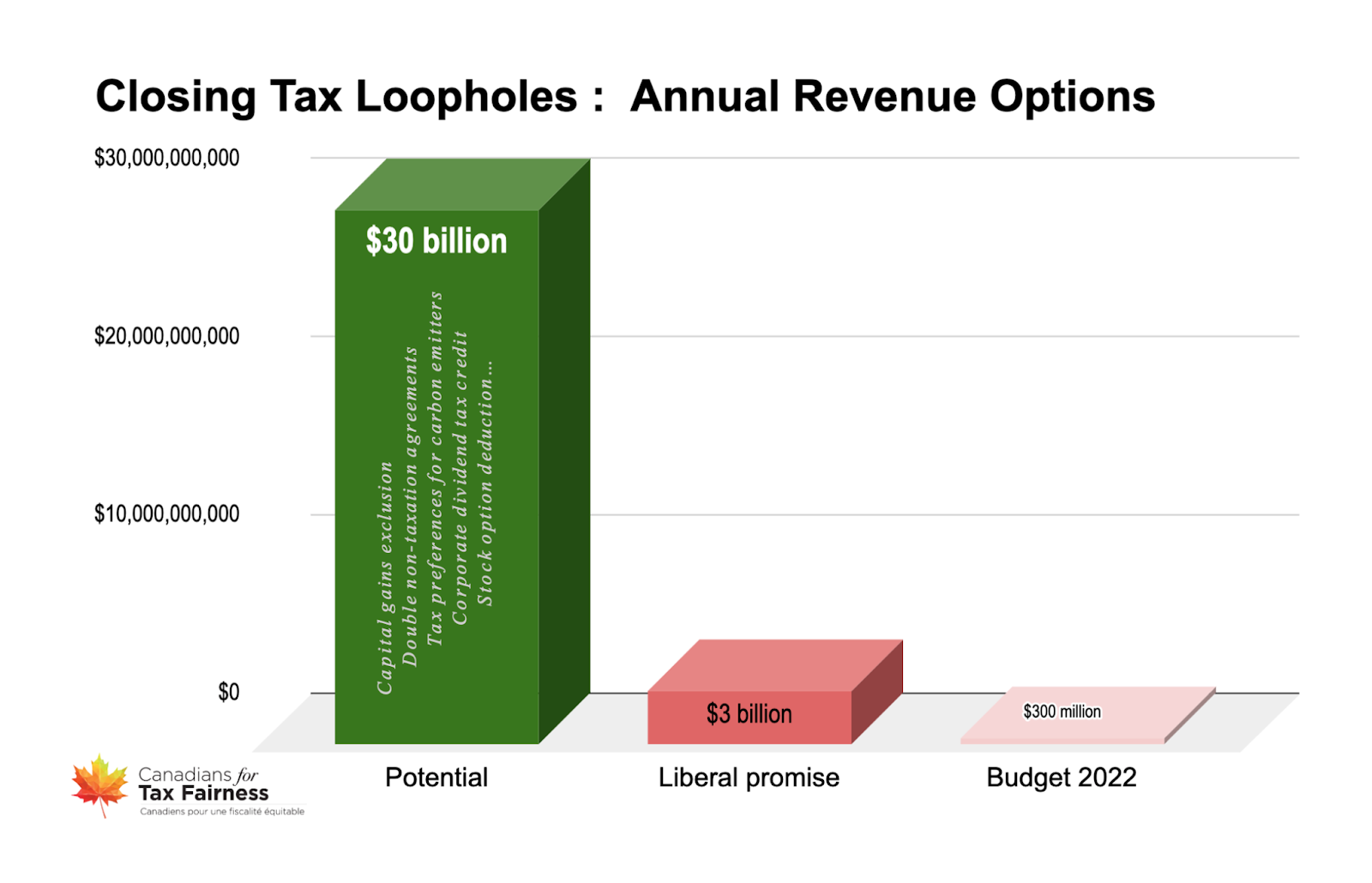 Strengthening Canada’s anti-avoidance rules: Huge corporations have been dodging millions in tax while making a mockery of Canada’s tax laws. There’s a “general anti-avoidance rule” (GAAR) to stop that abuse, but it’s weak. In 2021, the Liberals promised to modernise the GAAR regime.

No action on tax-dodging by the big banks: Budget 2022 acknowledges that federally regulated financial institutions use corporate structures in tax havens to engage in aggressive tax avoidance.

Less effective funding for the CRA: From 2016-2021, funding for the CRA to fight tax-dodging has earned a whopping 5 to 1 return on investment. In 2021, the Liberals promised to invest $2.5 billion in the CRA over 4 years, which would recover an estimated $11.9 billion. 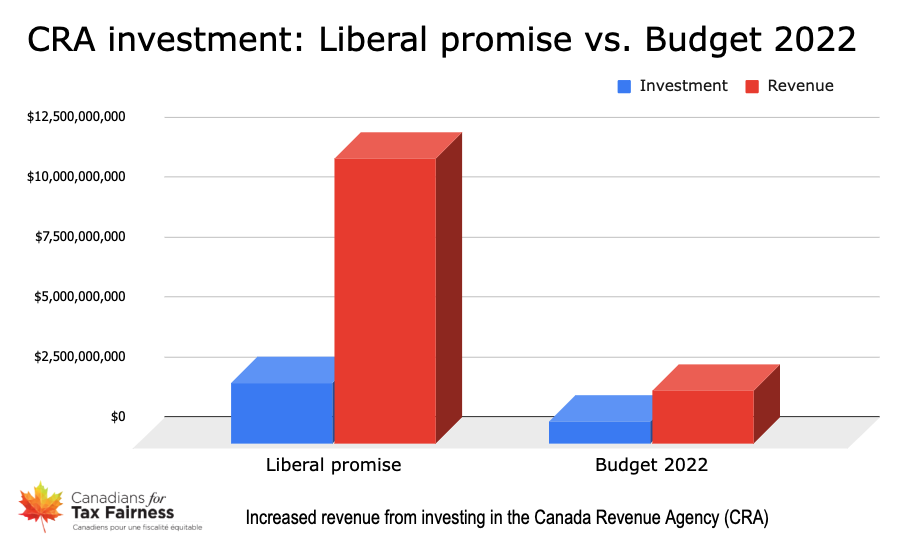 Establishing registries of beneficial owners of companies and real-estate: – VICTORY – C4TF and our allies Publish What You Pay Canada and Transparency International Canada have spent years doing detailed research and campaigning to shed light on the owners of anonymous shell companies. Anonymity facilitates tax-dodging and financial crime, allows oligarchs and criminal regimes to avoid sanctions, and contributes to social ills like an inflated housing market and the opioid crisis.

Carbon tax & rebate: The budget also continues to increase the carbon tax and rebate, delivering on the 2021 Liberal promise.

Incentives to reduce carbon pollution: With Budget 2022, the government continues to use tax credits in hopes that it will entice greater private sector investment in green technologies. Tax credits are a poor substitute for the direct government action that’s urgently needed to achieve a sustainable economy. Not only are they insufficient to deal with our multiple environmental crises, tax credits introduce into our tax system more complexity and opportunities for tax avoidance.

No increased royalties for natural resources: Budget 2022 fails to address crown royalty reductions for large carbon emitters, which could result in over $1 billion in revenue in Alberta alone.

Canada is facing numerous challenges that cannot be solved without government support and intervention. This intervention is impossible without substantial revenue. Canada can avoid taking on unnecessary debt. The government has the capacity to immediately and quickly raise the money needed for important priorities like dental care, pharmacare, First Nations reconciliation, and the transition to a green economy.

What’s missing from this Budget is the courage to reverse the under-taxation of record corporate profits, of individuals with enormous and growing fortunes, and of polluters profiting by the billions while destroying the planet.