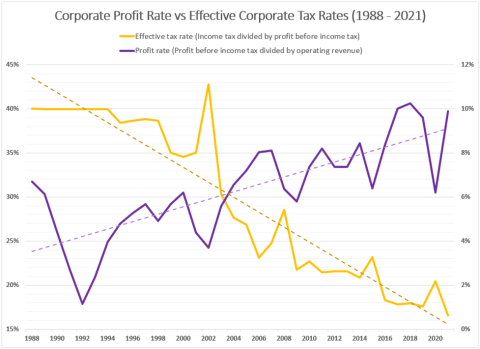 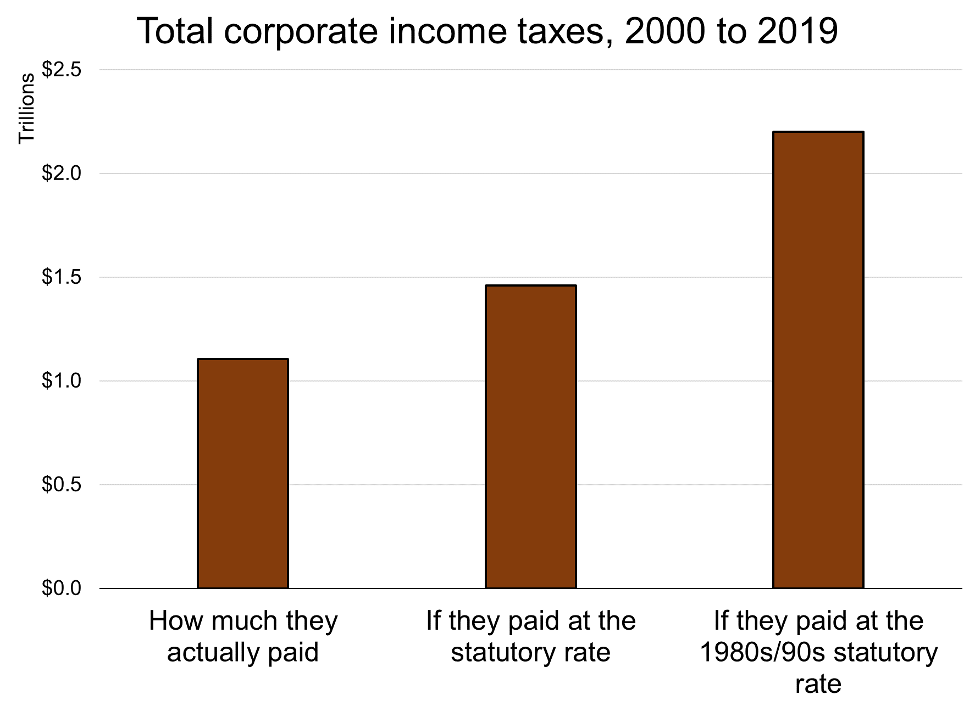 Proponents of corporate tax cuts claim that greater investment and jobs will follow. However, investment in productive assets by non-financial corporations has declined since at least 1990, even as taxes were cut. Rather than increased investment in productivity, savings from corporate tax cuts were fed into corporate cash pools, executive salaries, and distributions to shareholders.
During the pandemic, the trend of rising cash holdings was kicked into overdrive. Non-financial corporations have increased their cash-holdings by almost $200 billion. We estimate that at least $123 billion of that is from money injected by the federal government.
Rising corporate profit rates make everyday goods and services more expensive for households. A falling corporate tax rate increases the cost to households of government goods and services. Additionally, because corporate ownership is highly unequal, rising profits and falling corporate taxes exacerbate income and wealth inequality.
As concern about federal debt mounts, it is important to identify where the dollars put into the economy are ending up. Too many of them have settled in corporate coffers. This accumulation is not the result of socially-beneficial productivity and innovation. It is primarily the result of our trickle-up economy. Asset owners, simply by virtue of their ownership, syphon money out of the economy in the form of interest and profits. This can then be used to further increase their outsized asset ownership.
It is tempting to blame the corporations for this situation. However, they are simply taking advantage of a potent combination of misguided corporate tax policy and the government’s failure to close loopholes. Canada should follow the lead of our largest trading partners, the US and UK, which are moving to increase their corporate tax rates. Canada should also be leading at the OECD, which is looking at ways to stop international corporate tax dodging.
Reversing the long-term downward trend in corporate taxation does more than just increase the revenue of governments. It is a way to keep corporations accountable to the public. Corporations benefit from much government support. That support demands a high degree of transparency and accountability.
Measures that would help reverse these harmful trends include:
CORPORATE INCOME TAX FREEDOM DAY COMES EARLIER AND EARLIER
The date and time when corporate revenues cover the tax bill has been trending earlier since the late 1980s. From 1988 until 2009, Corporate Tax Freedom came, on average, by 9:37am on January 7. For 2010 to 2019, corporate income taxes were typically covered more than seven hours earlier at 2:19am. The last time it took over one week for corporations to gather enough revenue to cover their taxes was 2007. 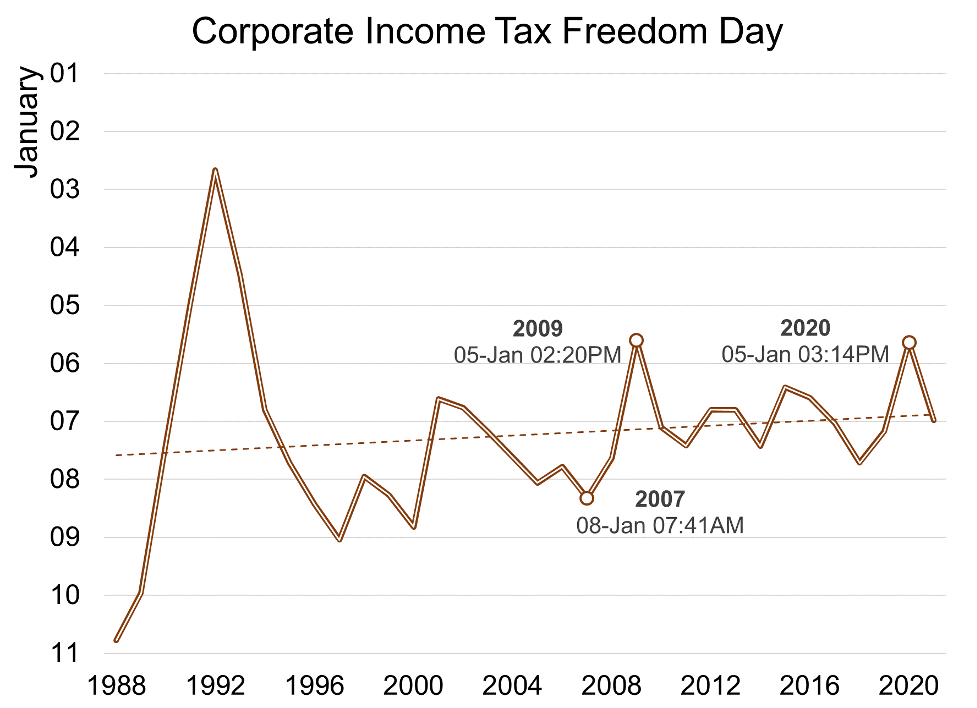 2020 had the earliest Corporate Income Tax Freedom Day since 2009, with the last dollar needed coming into corporate coffers at 3:14pm on January 5. The pandemic was an obvious factor, since it lowered total profits, which lowered taxes paid. Data for the first three quarters of 2021 show that Corporate Income Tax Freedom was likely achieved at 11:32pm on January 6.
If 2022 returns to the pre-pandemic trend, corporations will have collected the last tax dollar at 12:33am on January 7. However, if the pandemic performance has kickstarted a new trend, then corporations will have covered their meagre tax responsibilities almost four hours earlier, at 8:34pm on January 6.
THE CORPORATE PROFIT RATE IS INCREASING
Corporate Income Tax Freedom Day is the product of a corporation’s profit rate and its effective tax rate.[v] The corporate profit rate has been trending upward for decades. While the pandemic resulted in a lower profit rate in 2020, its impact was surprisingly small given the scale of economic calamity caused. In 2021, the corporate profit rate rebounded to 9.9%, its third highest recorded level. 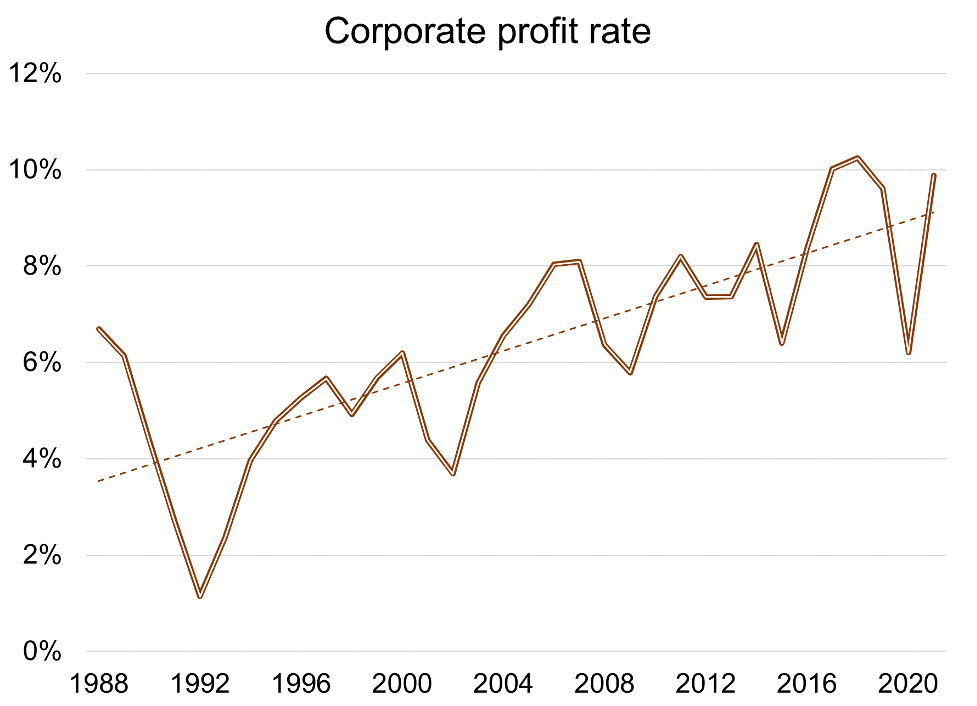 In 2017 and 2018, the Canadian corporate profit rate exceeded 10% for the first and second time on record, dipping slightly to 9.6% in 2019. The pandemic pushed margins down to 6.2% in 2020, the lowest level since 2009. However, this rate only appears low in the context of the recent highs. From 1988 to 2009, the average profit margin was 5.3%. Even if we exclude the extraordinarily low years of 1991 to 1994, the average was still just 5.8%. Despite a once-in-a-lifetime global economic shock, the 2020 profit margin was still the 9th highest over the 34 years analyzed.
THE CORPORATE INCOME TAX RATE IS DECREASING
Corporations have been astoundingly successful at driving down their tax rates at the same time as they push up their profit rates. Pandemic-lowered profits caused the effective tax rate to jump slightly.[vi] However, this was promptly reversed and the effective corporate income tax rate for 2021 is set to hit a record low of just 16.6%.[vii] 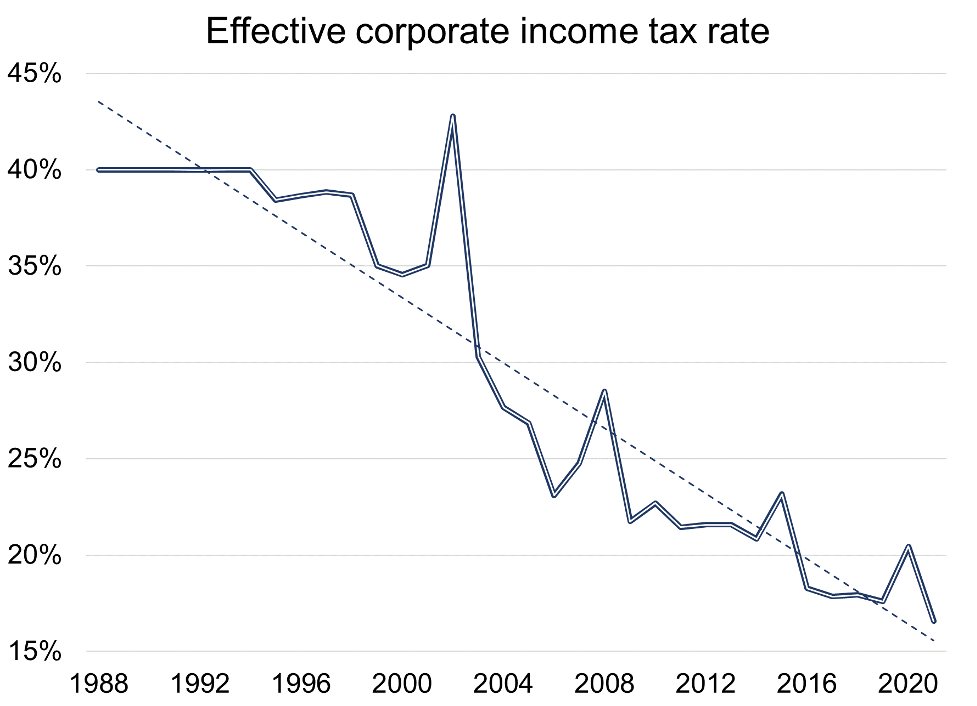 Corporations have benefitted from provincial and federal governments lowering statutory corporate income tax rates. The federal government has significantly reduced its rate since the 1960s. One justification for the reduction was to provide tax room for the provinces. However, while some provinces initially took advantage, most have since lowered their own statutory rates (visible in the light gray lines on figure below, ‘Statutory corporate income tax rates’. The result is a near halving of the combined average federal and provincial rate from 51.51% in the 1960s to an all-time low of 26.38% in 2020 and 2021.[viii]
If, for the last two decades, corporations had paid the average statutory income tax rate that prevailed through the 1980s and 1990s, Canadian governments would have collected an additional $1.1 trillion in revenue. To put this in perspective, that is more than the total amount of money given to the provinces through the Health and Social Transfer over the same two-decade period. 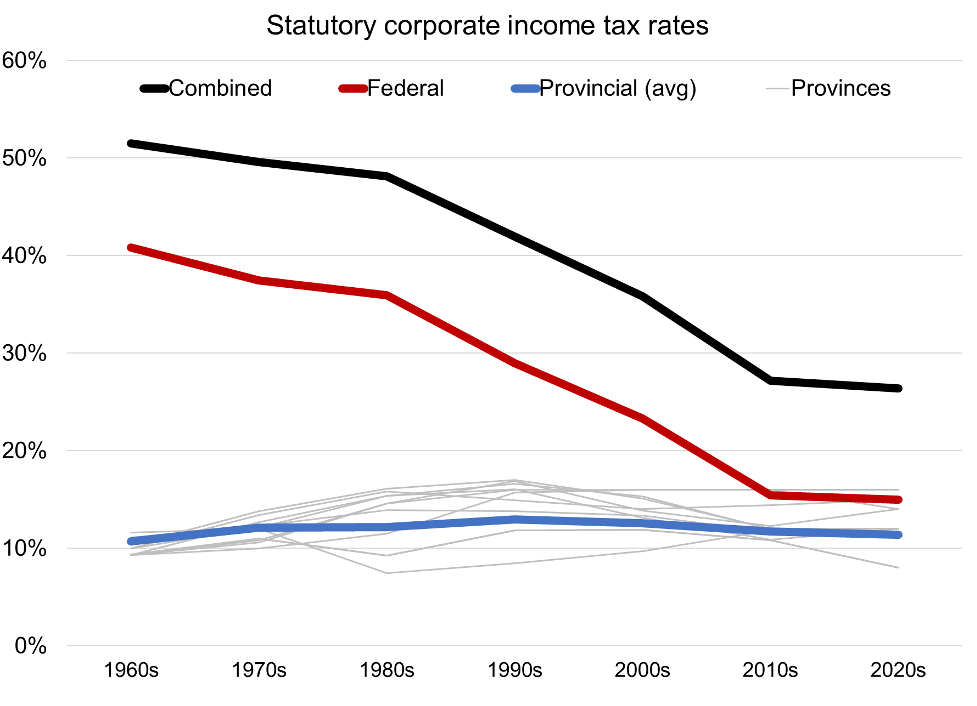 Corporations rarely actually pay the statutory amount of tax. First, governments provide numerous tax preferences, exemptions, and credits that allow corporations to reduce their tax bill. Second, through the use of increasingly sophisticated tax schemes that create and exploit loopholes, they are able to further reduce their taxes.

The gap between the statutory tax rate and the rate corporations actually pay has grown at an alarming rate. Through the 1990s, the effective tax rate averaged 7% below the statutory rate. That gap was increased to 18% in the 2000s, with a further increase to 25% in the 2010s. 2020 saw the largest gap on record at 37%. In other words, corporations kept more than one out of every three tax dollars that they would have paid at the statutory rate. This is thanks to both government tax preferences, tax credit handouts, and aggressive corporate tax avoidance schemes.
Table: Canadian Corporate Tax Rate Decline since the 1990s
Note: The difference is the statutory rate less the effective rate expressed as percentage points (pp). The value in brackets is the difference as a percentage of the statutory rate.
Even if corporations had just paid at the ever-falling statutory rate, government revenues from 2000 to 2019 would have been higher by $353 billion. In other words, of the $1.1 trillion in foregone government revenue, $353 billion is due to corporate tax avoidance with another $741 billion due to tax cuts.
CORPORATE CASH HOLDINGS ARE RISING
Advocates of cutting corporate income taxes through reduction of the statutory rate, as well as with lucrative tax credits, claim this will entice corporations to invest in productive capacity, creating jobs, and growing the economy. However, at the same time as corporate income tax rates fell over the last 30 years, so did corporate investment in productive capacity. 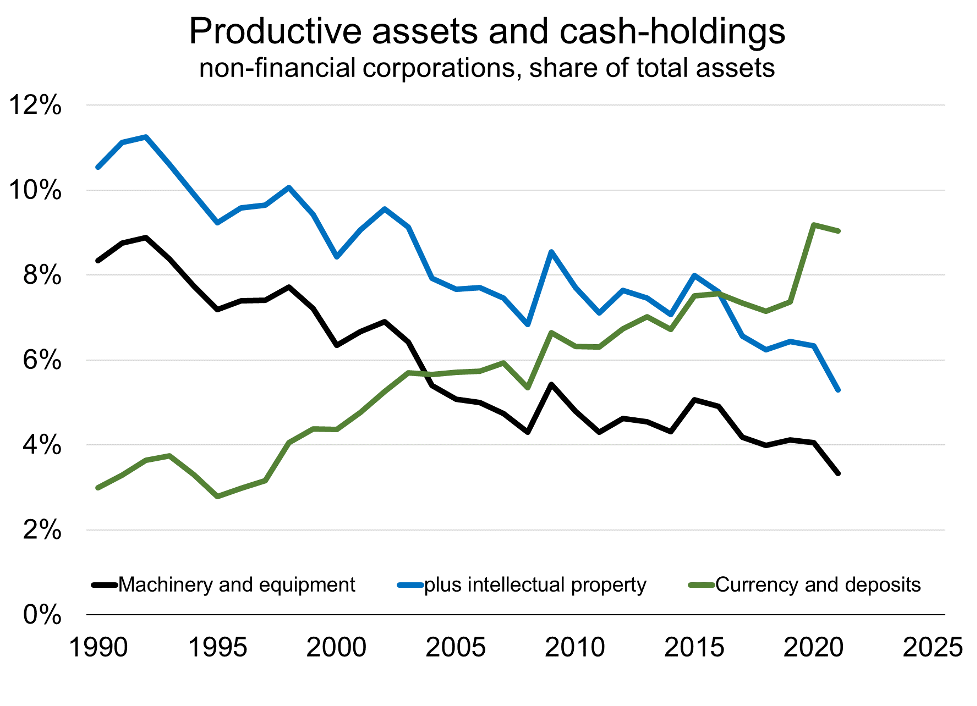