Report: The Rise of Corporate Profits in the Time of Covid

Voir en PDF: Report The Rise of Corporate Profits in the Time of Covid April 2022 (PDF)

In recent months, Canadians have seen significant price increases in everyday goods. New analysis shows that along with prices increasing, so too have corporate profit margins, which is not a coincidence. In 2021, when Canada was in the middle of the covid pandemic, large corporations in all major sectors of the economy saw their profit margins substantially exceed 20 year averages, with many hitting record levels. The Finance, Insurance & Real Estate Sector (FIRE), which already had the highest sectoral profit margin over the last two decades, also had the biggest increase in 2021—reaching a profit margin of 22%.

As the federal government considers its 2022 budget, it is critically important that both rising profit margins and all-time lows in corporate taxation be addressed. Our previous research shows that in 2021, corporations enjoyed their lowest ever effective income tax rate of 16.6%, which contributed to the sharp rise in corporate profit.[i]

However, the key contributor to the jump in corporate profits is increasing prices. This report indicates that in 2021 corporations brought in unprecedented levels of profit largely by increasing what they charge for their goods and services. This allowed corporations to almost double profit margins in 2021 to 16%, compared to the 9% average for 2002 to 2019.

When corporations choose to raise their prices in order to boost their profit margins, they drive up inflation. While much emphasis is put on inflation being caused by government spending, the corporate pursuit of higher profits through price increases is a much simpler explanation, though more poorly understood and less discussed.

This misunderstanding plays into the hands of individuals, organizations and lobby groups pushing an austerity agenda. Such an agenda would have a range of negative repercussions on the Canadian economy, while benefiting only the very rich.

The more Canadians understand what causes prices to rise, the better we can respond in a manner that helps the overall economy, as opposed to enriching only a fortunate few.

Beyond driving inflation and reducing the affordability of goods and services, higher corporate profit margins also contribute to rising inequality. The overwhelming majority of corporate owners are part of the 1% and they receive the majority of capital income.

Fortunately, a number of reasonable, immediately applicable solutions exist, including bringing corporate income tax rates closer to where they used to be, applying an excess profits tax on top pandemic profits, closing the most egregious tax loopholes, and improving corporate financial transparency.

2. Profit margins have soared for both commodity and non-commodity companies.

3. Higher profit margins are a little discussed driver of inflation.

4. With mounting concerns about affordability for both households and governments, extraordinary corporate profits need to be addressed by the federal government:

THE RISE OF CORPORATE PROFITS IN THE TIME OF COVID

Our analysis shows that the 2021 pre-tax profit margin of publicly-listed Canadian corporations was almost double its average over the previous 20 years.[ii] 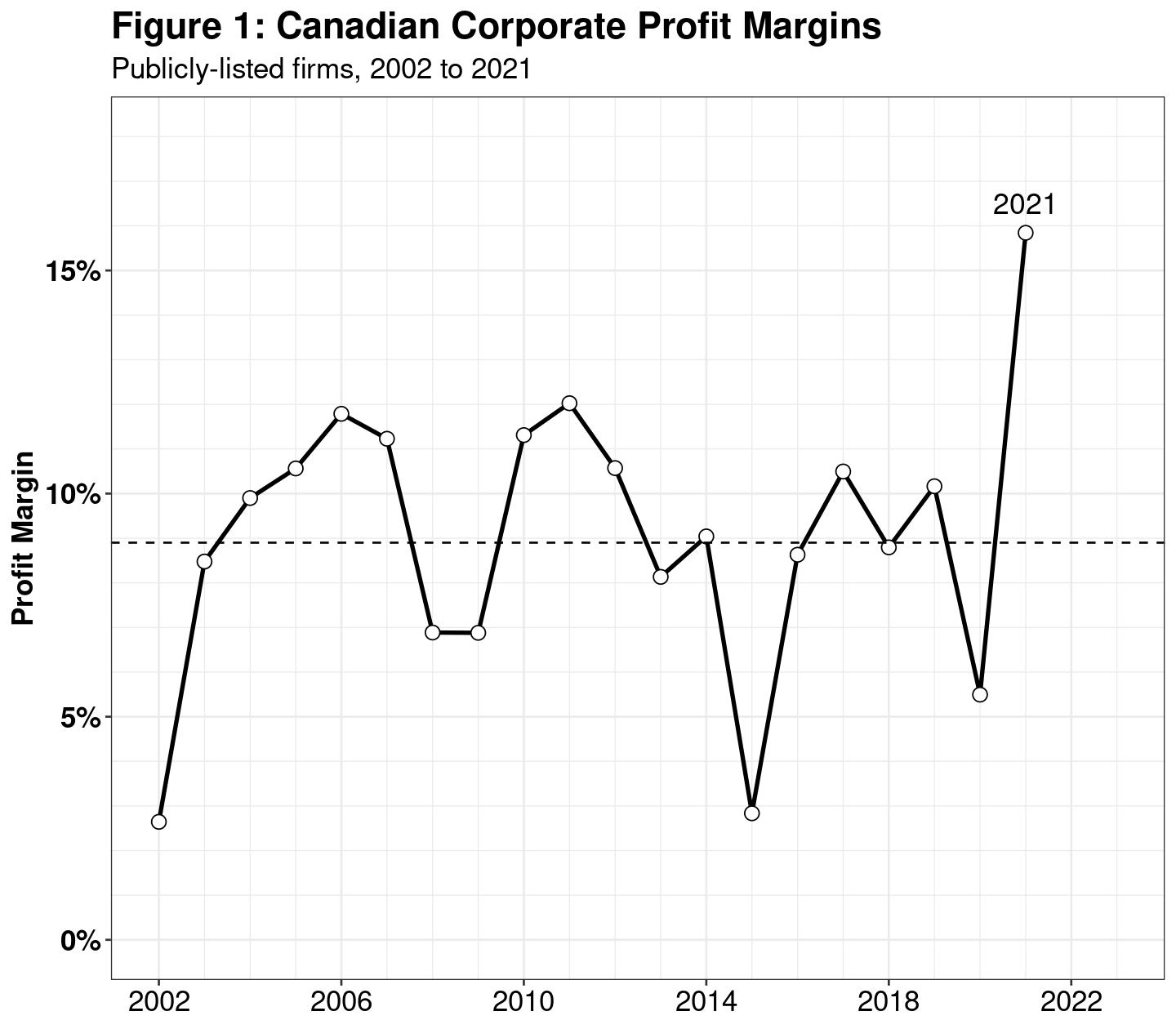 Between 2019 and 2021, average annual sales revenue per Canadian publicly-listed company increased by $174.5 million. Higher profit margins are responsible for almost all of that increase. Average total costs only increased $16.9 million.[iii] That means $157.6 million per firm—90.3% of increased sales—was profits.

As seen in figure 1, profit margins are typically volatile. Among Canadian companies, much of that volatility is driven by primary commodity companies—predominantly those in mining, as well as oil & gas extraction.

Figure 2 is the profit margin for non-commodity companies.[iv] It shows that commodity prices are only a small part of higher corporate profit margins. 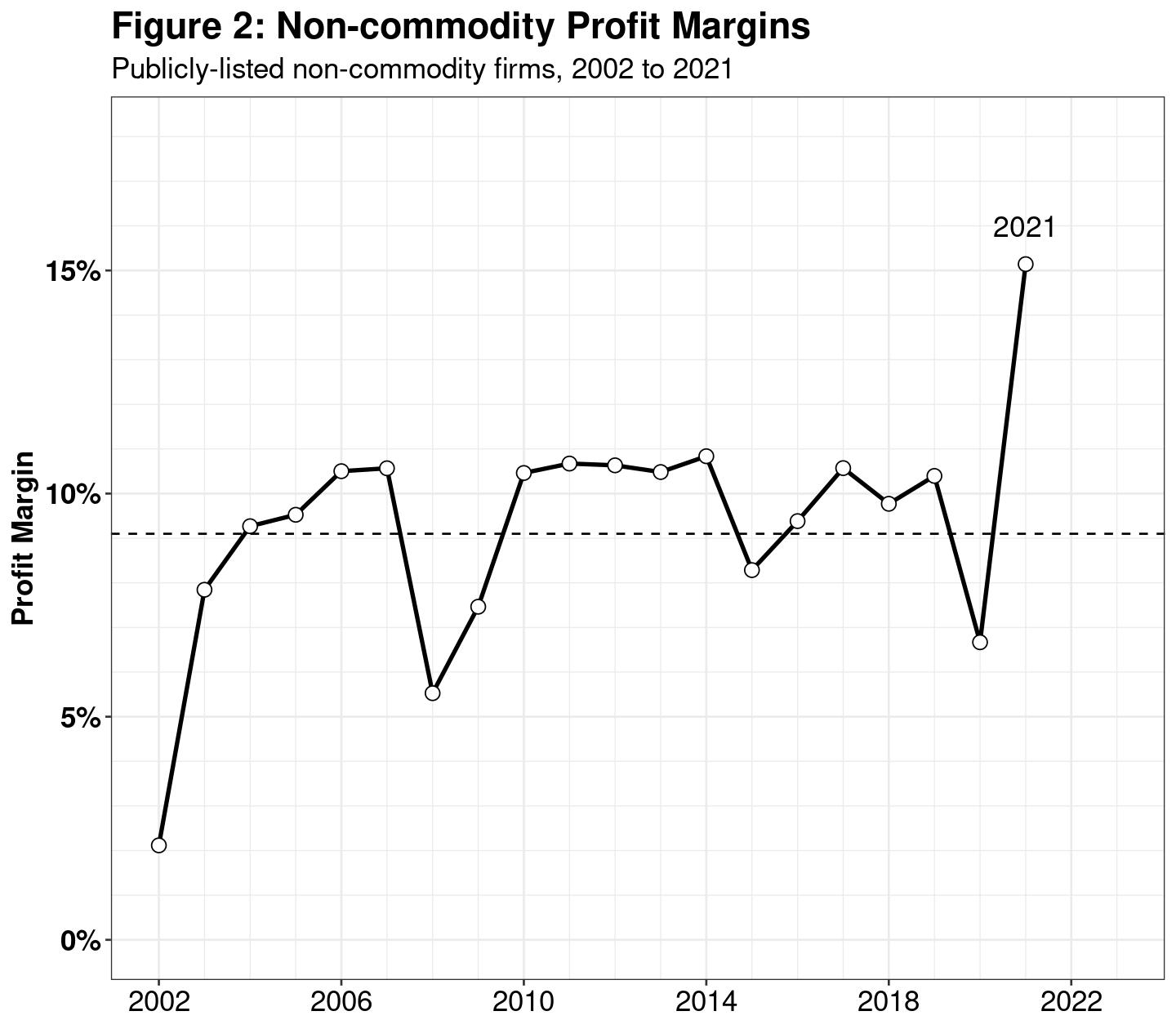 Among the non-commodity publicly-listed Canadian companies, about two-fifths are in manufacturing, just under one-quarter are in FIRE, and more than one-fifth are in service & retail. All of these non-commodity sectors had higher profit margins in 2021, which can be seen in Figure 3. 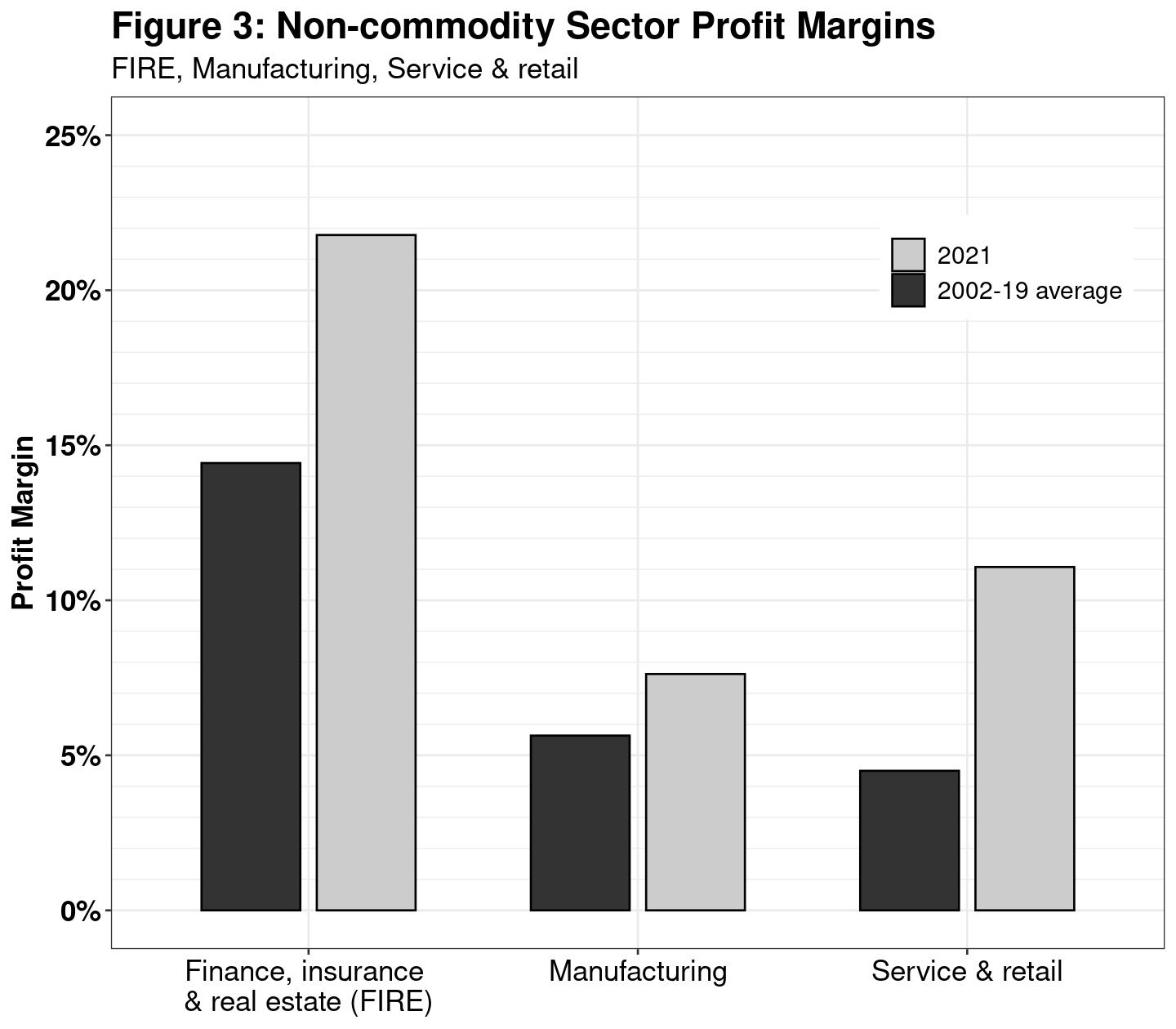 Higher corporate profit margins are a key factor in inflation, although it is widely ignored.[v] Many prices are not set by competitive markets. They are set by corporations. In the parlance of economics, those corporations are not ‘price-takers’, they are ‘price-makers’.

We lack the data to parse sales and costs into prices and quantities. However, given that corporations also faced increased prices, the small change in total costs indicates cuts to input quantities. Absent significant improvements in productivity eking out higher quantities from fewer inputs, the only way to increase the sales value is to hike prices. Price hikes throughout the economy are ultimately borne by households, which are less able to pass them along.

The combination of rising inflation and high corporate profit margins suggests that corporations have taken advantage of global economic turmoil to boost prices, and that government spending has played a less significant role than pro-austerity advocates have asserted.

The COVID-19 pandemic has created incredible turmoil and uncertainty in the global economy, and caused major economic hardship for millions of Canadians. In response, the federal government has provided an unprecedented amount of financial support. A substantial portion of that support flowed to Canadian corporations.

While receiving public support, many corporations—across many corporate sectors—have been able to substantially boost profit margins by hiking prices, as shown in this report. These price hikes have contributed to inflation. Therefore, the role of higher corporate profit margins should be part of the inflation discussion.

Higher corporate profits are both a cause and an effect of various social maladies, including inflation, inequality and the wellbeing of workers and households. Some of these maladies have been worsened by misguided government policy, including cuts to the federal income tax rate, and the failure to close loopholes that allow corporations to lower their tax rates even further.

C4TF recommends four policies as part of addressing these problems:

1) Implement an excess profits tax. The pandemic has contributed to extraordinary levels of profit that do not reflect extraordinary innovation. Rather, they are the result of our ‘trickle up’ economy, since more government spending invariably finds its way into corporate coffers. During WWI and WWII the government implemented excess profits taxes as a way of preventing corporations—and their wealthy owners—from becoming unduly rich during a time of widespread struggle and hardship. The same is needed as we continue to deal with COVID-19. The current government has promised a 3% pandemic surtax on banks with profits greater than $1 billion. This is a step in the right direction, but needlessly restrictive. An NDP proposal for an addition 15% tax on companies with more than $10 million in profits and higher than normal profit margins was estimated by the Parliamentary Budget Office (PBO) to bring in $8 billion in additional revenue. This would undoubtedly be even higher now.

2) Close corporate tax loopholes. The tax system is complex, which makes it difficult for average Canadians to navigate. However, that complexity also makes it possible for corporations to use sophisticated accounting in order to exploit loopholes and avoid taxes. Despite that complexity, there are several especially egregious loopholes that ought to be closed promptly. First, the deduction of interest expenses should be limited to 20% of gross profits. The government announced in the 2021 Budget that it would limit deductibility to 40% in 2023, and then lower the limit to 30%. This is at the high end of an OECD recommendation made in 2013. The current plan is long overdue, too slow, and sets the limit too high. Second, set a $1 million cap on executive salary deductions. Currently, the entirety of an executive’s salary is fully deductible. This means Canadians are subsidizing run-away executive salaries, which fuel inequality. The United States already has such a cap. There is no reason for Canada not to follow suit. Finally, eliminate the preferential tax treatment of capital gains. While income from work is fully taxed, only half of the income from the buying and selling of assets is taxed. This saves corporations almost $11 billion a year in taxes.

4) Require public country-by-country corporate financial reporting. The current government’s agreement to speed up implementation of the publicly-accessible beneficial ownership registry, as part of the confidence-and-supply agreement with the NDP, is a welcome step forward on corporate transparency. However, more needs to be done. Although this brief analyzed Canadian-headquartered corporations, many of these companies operate globally. And of course, many foreign transnational corporations operate in Canada. Unfortunately, we are unable to actually identify how much corporate sales or profits were generated in Canada, or how much tax was or was not paid on those profits. The financial details of these companies, such as their Canadian earnings and taxes paid, are not available to the public. Because these companies play an incredibly important role in our economy, the government should require the public disclosure of these financial details.

[i] See our report on Corporate Income Tax Freedom Day.

[v] Our analysis used the financial reporting of publicly-listed Canadian corporations on a calendar year basis. Profit margins are calculated using pre-tax profits. Real estate income trusts (REITs) are excluded from the analysis due to their special tax treatment.