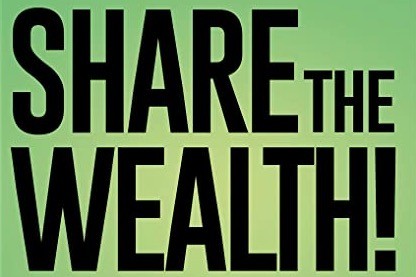 From childhood in her grandparents’ rural Saskatchewan farmhouse, through fourteen years in the Royal Canadian Naval Reserves, and even during a BA in international development at St-Mary’s and an MA in economics at Dalhousie, Angella MacEwen never imagined that she’d author a book on tax justice.

“Fair taxation wasn’t something I’d really heard about, even a decade ago,” she recalls. Canadians for Tax Fairness (C4TF), established in 2011, and fellow tax justice organizations like Échec au Paradis Fiscaux and ATTAC-Québec, were just starting to put issues like taxing the wealthiest 1%, closing tax loopholes, tackling tax havens, corporations paying their fair share, and taxing digital giants on the Canadian map. Sure, the growing gap between rich and poor was plain to see for every factory worker, farmer, tradesperson, civil servant, professional, and other members of the working or middle class. But few amongst them had the knowledge, self-confidence, money and time to refute the well-paid PR pundits and corporate media megaphones who peddled political complacency, and encouraged fantastical dreams that achieving the wealth of their plutocratic employers was simply a matter of working harder, longer, smarter.

It seemed only a handful of economists had abstained from the pro-corporate, neo-conservative bandwagon. Instead, the likes of Lars Osberg, Jim Stanford, Andrew Jackson, Iglika Ivanova, the late Mike McCracken and the book’s often-cited Toby Sanger, became friends and mentors to MacEwen. “I learned a lot from Toby over the years,” MacEwen recalls, of long evenings of wine and discussions of hybrid mismatch arrangements at restaurants in Ottawa, or in the living rooms where cozied up fellow members of the Progressive Economics Forum, research papers and bike helmets in hand.

But today fair taxation is a hot topic. In no small measure, that’s due to the hard work of these fair tax fighters. And it’s also, unfortunately, easier to refute the plutocrat’s PR, when the fantastical dreams their pundits would spin crash hard and sink fast on the state of the real world.

The book describes that world, rife with the human harms of austerity, and the costs it puts back on the government’s balance sheet. One in five Canadian households, we learn, report a family member who recently couldn’t afford their prescribed medicine, while cost-related non-adherence to prescribed medicine hits the healthcare system with $1.6 billion per year in hospital visits. More than 1 in 5 Canadians avoid the dentist every year because they can’t afford to go, costing taxpayers $155 million a year in bills at the emergency room. Special interest lobbyists have warped government policy so that Canada has unreasonably high prices for things like medicines and mobile data. And preferential tax treatment for digital giants like Google and Facebook helped cause the closure of 189 community newspapers and 36 daily papers from 2008 to 2018, leading to 16,000 journalists losing their jobs.

Meanwhile, we learn that Canada’s 1% now control over a quarter of the country’s wealth - over C$3 trillion. By January 4th of this year, at 11:17am, the average Canadian top-100 CEO made as much money as the average Canadian worker will make in all of 2021. Some of this obscene pay is effectively subsidized by our government, such as when Richard Baker of Hudson’s Bay, who made over $54 million in 2017 alone, took advantage of the dubious stock option loophole. The top 1% pay a lower effective tax rate than even the lowest-income Canadians. And a 1% wealth tax on assets over $20 million, for Canada’s one richest family (the Thomsons), would raise enough money to wipe out all student loan debt in the country, without preventing that one family’s $50 billion fortune from continuing to grow.

As for Canadian corporations - the profits of which mostly go to the rich, we learn they used to pay as much tax into public revenue as people, but now people contribute 3.5 times more. Canada’s top 102 corporations manage to legally pay $62.9 billion less in tax than their statutory tax rate of 26.6% would require. Some foreign multinationals like Amazon have been paying zero tax in Canada, period. Canada’s big banks increased their profit by 60% from 2010 to 2015, while the rate of tax on their earnings actually dropped, thanks in part to using offshore tax havens. Corporations and wealthy Canadians have moved more than $80 billion dollars to the off-shore tax-haven of Barbados alone - in fact there’s more Canadian money parked in Barbados than in France, Germany, Italy, Japan and Russia combined. And to top it off, Canadian corporations received taxpayer-funded government subsidies while paying out billions to their shareholders.

Section by section, the numbers spell out why fair tax is indeed a hot topic. No wonder even the mainstream press is covering the palpable rage, as billionaire tax-dodgers fly off into space, and polls show massive public support for fair taxation across party lines. Even the most conservative institutions are having to call the lie of trickle-down economics for what it always was. The IMF admits austerity didn’t work. The World Bank likes the wealth tax idea. The UN is on board. Pro-tax academics like Thomas Piketty have gained world-wide fame. And small NGOs like C4TF, which once toiled nearly alone to put tax justice on the political agenda, are now called on as experts by government committees and the mainstream press.

The politicians are listening. Countries are applying new successful taxes on the uber-rich. The Biden Administration is promoting higher corporate taxes. And in Canada, the Liberal government’s Throne Speech promised to find new ways to tackle wealth inequality, and their 2021 budget put in small measures like taxing luxury planes and yachts, and somewhat reducing certain tax loopholes. The Conservative Party has stated that policies should be built on a principle of tax fairness. And the NDP seems to be making tax fairness an important part of their upcoming election campaign.

What better time to spell out the case for tax justice? “I got a call in December,” said MacEwen. Jonathan Gauvin, the NDP’s Director of Policy and Research, proposed that they write a simple but detailed book on taxing wealth for a lay audience. Gauvin, as his preface makes clear, has skin in the game, having himself missed meals and proper dental care due to poverty, and having been forced from homes when his family couldn’t afford the rent or electricity.

MacEwen liked the plan. She’d been involved with the NDP since her university days, volunteering for a professor who ran for the NDP in a provincial by-election, and later volunteering with former NDP leader Alexa McDonough, and more recently running federally for the party in Ottawa Centre - as she will again. She also had a month off for Christmas, and figured that between her and Jonathan, they understood the issues well enough to write a book that ensured the subjects were simple and clear for the average Canadian too.

As it turned out, in researching the book, even MacEwen learned more than she’d expected. Studying sites like the Corporate Mapping Project, and reports like C4TF’s It’s Time to Tax Extreme Wealth Inequality, even CUPE’s chief economist hadn’t seen the extent of the wealth that doesn’t get shared. “I didn’t realize quite how many billionaires Canada now has,” she said, “how interconnected they all are, with wealth and income inequality supported not just through the tax system, but also as extremely well-paid CEO positions are inherited.” A number of case studies were eye-opening for her, such as how the Irving empire moved their money to Bermuda, and how Loblaws had a bank in a tax haven, which the courts deemed legal to avoid paying $368 million in tax.

In the end, the compilation of what MacEwen and Gauvin learned and already knew is a well-packaged, concise analysis, written in lay terms. The format is easy to follow, documenting the extent of Canadian wealth inequality, the myths that justify it, the political decisions that continue to encourage it, and a number of critical changes to our tax system that would remedy the problem. A final section discusses how increased government revenues, taxed responsibly from those who would experience little to zero change in their lavish lifestyles, could have a significant positive impact on improving the lives of Canadians - richer and poorer alike.

Though the extent of the wealth not shared can be jaw-dropping, the authors thankfully avoid lecturing rhetoric, and let the numbers speak for themselves. The tone is pragmatic, sometimes indignant, and ultimately hopeful. “I wanted people to understand that it is indeed possible to tax the rich,” MacEwen said. “People think they’ll just find a way around higher taxes, and sometimes they can, so it’s also important to show that you have to change the whole tax system, and not just one loophole here or there. And I wanted people to understand that making these changes is not a technical question. It’s a political choice.”

That choice to share the wealth include the kinds of measures that C4TF has advocated for years:

Many of these measures are, unsurprisingly, aligned with proposals from the NDP. And the book's explicit support for NDP positions might make it a harder sell for supporters of other parties. But MacEwen’s off to a hopeful start. “I have a sister who tends to vote conservative,” she said, “and after reading the book my sister was so impressed that she told a number of her friends to read it too.”

And perhaps that hopeful start is a lesson for the rest of us: that we have more in common than most of us thought, when it comes to sharing the wealth.

Published by and available through Lorimer Books.

See other book recommendations by Canadians for Tax Fairness here.