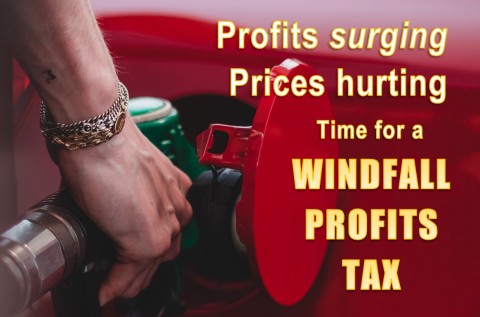 Rising energy prices are straining the wallets of Canadian families. At the same time, oil & gas companies (O&Gs) are reaping record profits. This is no coincidence. Our pain is their profit.

External pressures, such as the Russian war on Ukraine, are driving up energy costs. However, oil and gas companies are not just passing along those costs. They are taking advantage of the situation to boost their own profits.

The largest profit grab in the recent six month period was by Canadian Natural Resources (CNR), which booked $7.5 billion. Pre-pandemic, CNR’s six month average was $1.4 billion. Suncor had the second highest reported pre-tax profits of $5.9 billion, which is almost three times its six-month average of $2 billion.

With rising costs, O&Gs would reap exceptional profits even if they had maintained their average profit margin. But they did more than maintain them.

Before the pandemic, the top 10 O&G companies had an average combined profit margin of 11%. Through 2021, they pushed that margin to 15%. In the first quarter of 2022, their profit margin reached 21%. No one can say how much higher they could go if this trend goes unchecked.

Some would hope that these exceptional profits would translate to business growth and more jobs for Canadians. There is little indication that is happening.

Substantial portions of that money are going to shareholders instead of being invested in the Canadian economy to create jobs or address climate change. In fact, since the beginning of the pandemic, the ten largest O&Gs have sent more money to owners than they have made in profit! Every company in the top ten paid dividends even during quarters when they reported a pre-tax loss. Over $56 billion has gone to owners compared to $49 billion profit. [2]

This is outrageous and unacceptable. But there’s an easy solution, which other governments are already implementing. The Canadian government can act quickly to create a temporary windfall profit tax that funds an energy rebate for families. In the UK, the Conservative government is already doing something similar.

Here’s how it would work. The government would collect a portion of the huge profits being reaped by O&Gs and then distribute it to Canadians to ease the burden of rising energy costs. The tax can be high enough that Canadians get needed nelp, but low enough that the companies remain profitable. The UK has set the tax at 25%.

Plus, we can offer a deal for O&Gs that use the funds to reduce their climate impact. The government can allow an exemption on windfall profits that are invested within Canada to reduce carbon emissions or help their workforces transition to green jobs.

The rebate should be universal and go to every Canadian household. That will ensure everyone who needs the relief will receive it. However, it should also be taxable so those with sufficient income, who do not need the assistance, will return the money to the government.

The oil and gas lobby in Canada is extremely powerful. But as the UK showed, O&Gs are not invincible. A windfall profits tax is one way to make sure that O&G companies—and their owners—aren’t capitalizing on our affordability crisis.

Rather than letting shareholders get rich off our natural resources while O&Gs jack up prices, the government should be putting that money back in our pockets—and fast!

2. This figure combines dividends, share buybacks, and acquisitions, all of which distribute money to owners.