What could Canada do with 20 years of lost corporate tax? 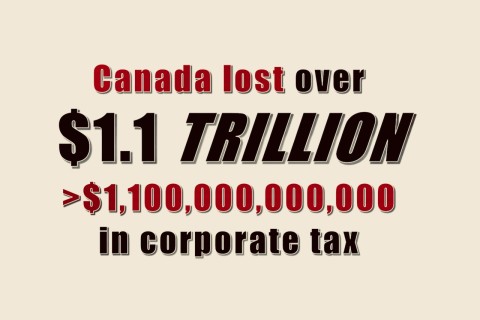 Canada has lost over $1.1 trillion in corporate tax over the last two decades, compared to what we would’ve raised if corporations were paying at the statutory rate of the 1990s.

That’s partly because the federal government has steadily reduced its statutory corporate tax rate since the 1960s, and provincial governments have been reducing their rates since the late 1980s—unlike personal income tax rates, which have been relatively stable over the last 30 years. The result is a near halving of the combined average federal and provincial statutory rate from 51.51 percent in the 1960s to an all-time low of 26.38 percent in 2020 and 2021.

Meanwhile, corporations were paying even less tax on their record-setting profits than the statutory rate indicated, by engaging in aggressive tax avoidance, taking advantage of tax loopholes, and using tax havens.

In fact, the gap between their statutory and effective rates increased to an average of 18 percent from 2000 to 2009, and to 25 percent over the 2010s. In other words, corporations kept a quarter of the taxes that they would have paid at the statutory rate.

In 2021, Canadian corporations enjoyed the largest gap on record at 37 percent. That means well over a third of their taxes remained in corporate coffers. No wonder they had made enough profit in the first week of January to pay their corporate taxes for the entire year.

The impact of these decreasing corporate tax rates has become more pronounced, and the possibilities that would exist in a fairer system are remarkable.

During those same years, from 2000 to 2019, the federal government lost $353 billion to corporations lowering their effective tax rate by using tax credits, loopholes, tax havens, and aggressive—often dubious—accounting.

That’s enough money to pay for the national student debt crisis ($28 billion), the proposed universal pharmacare plan for the next five years ($267 billion), and then some.

When you add those numbers up, you realize that Canadian governments have lost over $1.1 trillion in revenue, due to both declining statutory rates, and declining effective corporate tax rates. To put this in perspective, that combined amount is more than all the money given to the provinces through the Canada Health and Social Transfer over the same two-decade period.

Even deficit hawks should be upset about this lost revenue, since that $1.1 trillion could have covered the entire consolidated government debt.

Consequently, governments have carried more debt, cut important public services, and shifted the tax responsibility to workers, who cannot afford the fancy accountants and lawyers of the super-rich and big corporations.

Canadians for Tax Fairness supports making corporations pay their fair share, beginning with a return of the federal statutory corporate tax rate from 15 to 20 percent, and by closing tax loopholes, and tackling tax havens.

Read the article in Canadian Dimension.