Unaccountable: How did Canada lose $30 billion to corporations?

View as PDF: Unaccountable: How did Canada lose $30 billion to corporations? (PDF)

Canada’s biggest corporations are making record high profits and paying income tax at record low rates. This potent combination deprived the public of more than $30 billion in tax revenue in 2021. [1] The foregone revenue could have reduced the 2021 federal and provincial deficit by 20%. [2] Unfortunately, a lack of corporate financial transparency makes it difficult to identify how corporations were able to avoid so much tax. The government needs to explain how corporations are able to avoid such large amounts of tax and take action to reduce the corporate “tax gap”.

The “tax gap” is the difference between how much a taxpayer actually pays in tax, and how much they would pay at the statutory tax rate—the rate stipulated in the tax code. The corporate tax gap grows if corporate profits increase or if the effective tax rate—how much income tax companies actually pay as a share of profits—falls. 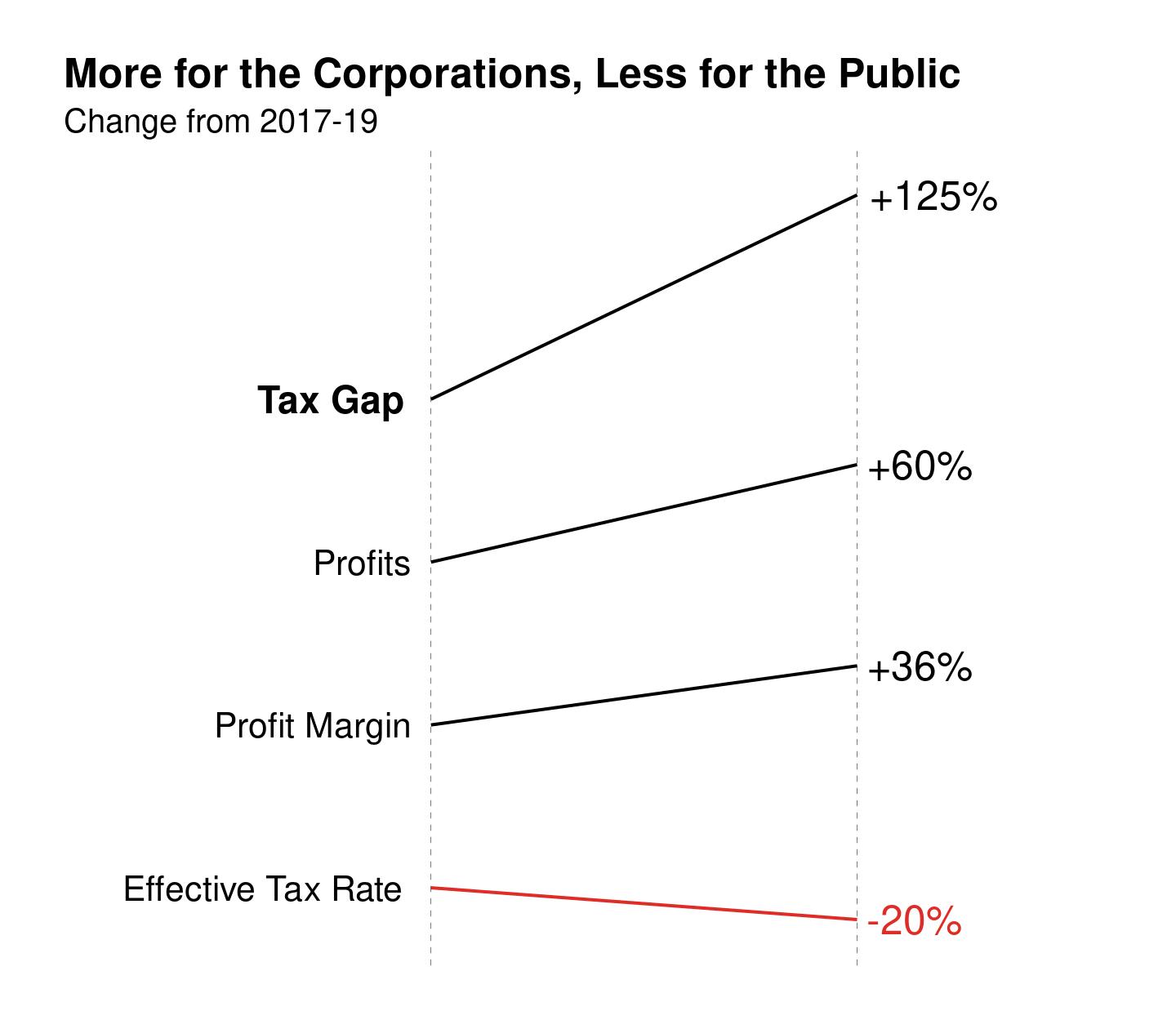 Corporate tax avoidance is not a new problem. Rather, the enormous increase in the corporate tax gap for 2021 suggests that a persistent problem may be growing worse.

Corporate tax avoidance has significant consequences for government finances and the Canadian economy. It also undermines people’s confidence in our tax system. Above all else, Canadians expect the tax system to be fair. Whether corporations are using questionable tax planning to avoid taxes or simply taking advantage of lucrative loopholes offered by governments, we deserve to know why the corporate tax gap reached such enormous proportions in 2021.

In order to calculate the corporate tax gap for 2017 to 2021, we examined the sales, pre-tax profits, and taxes paid for 123 of Canada’s largest corporations. The combined annual tax gap for these companies can be seen in Figure 1. 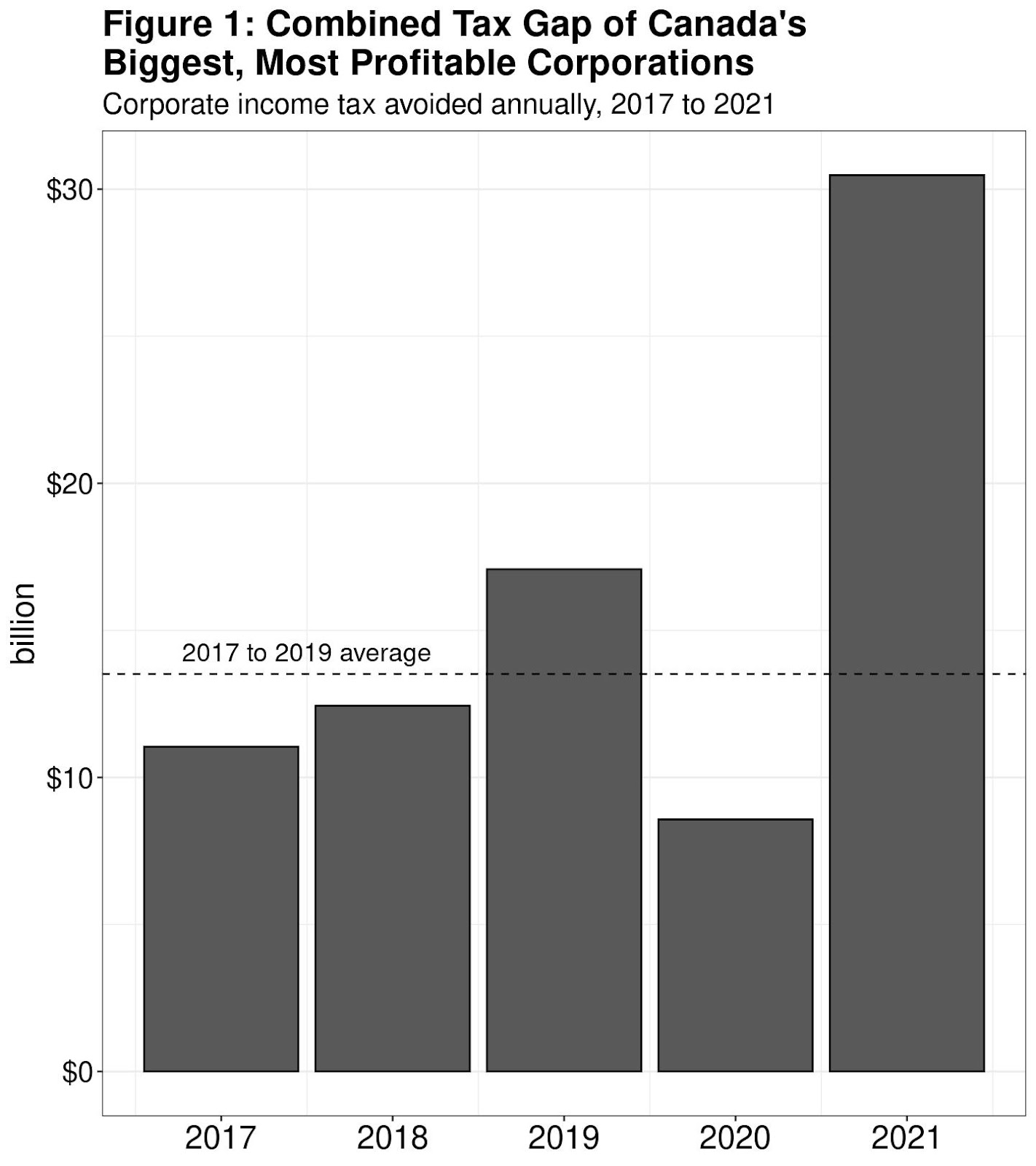 Note: The annual tax gap is the combined gap between what the 123 companies analyzed actually paid and how much they would have paid at the statutory tax rate.

The enormous increase in the tax gap for 2021 is the product of much higher corporate profits and a lower effective tax rate. Corporate profits increased by 60% over the three years before the pandemic. This was partially due to higher revenues, which increased by 17%, but largely due to higher profit margins, which rose from an average of 12.8% to 17.4%. At the same time, the effective tax rate dropped from an average of 19% to 15.3%. 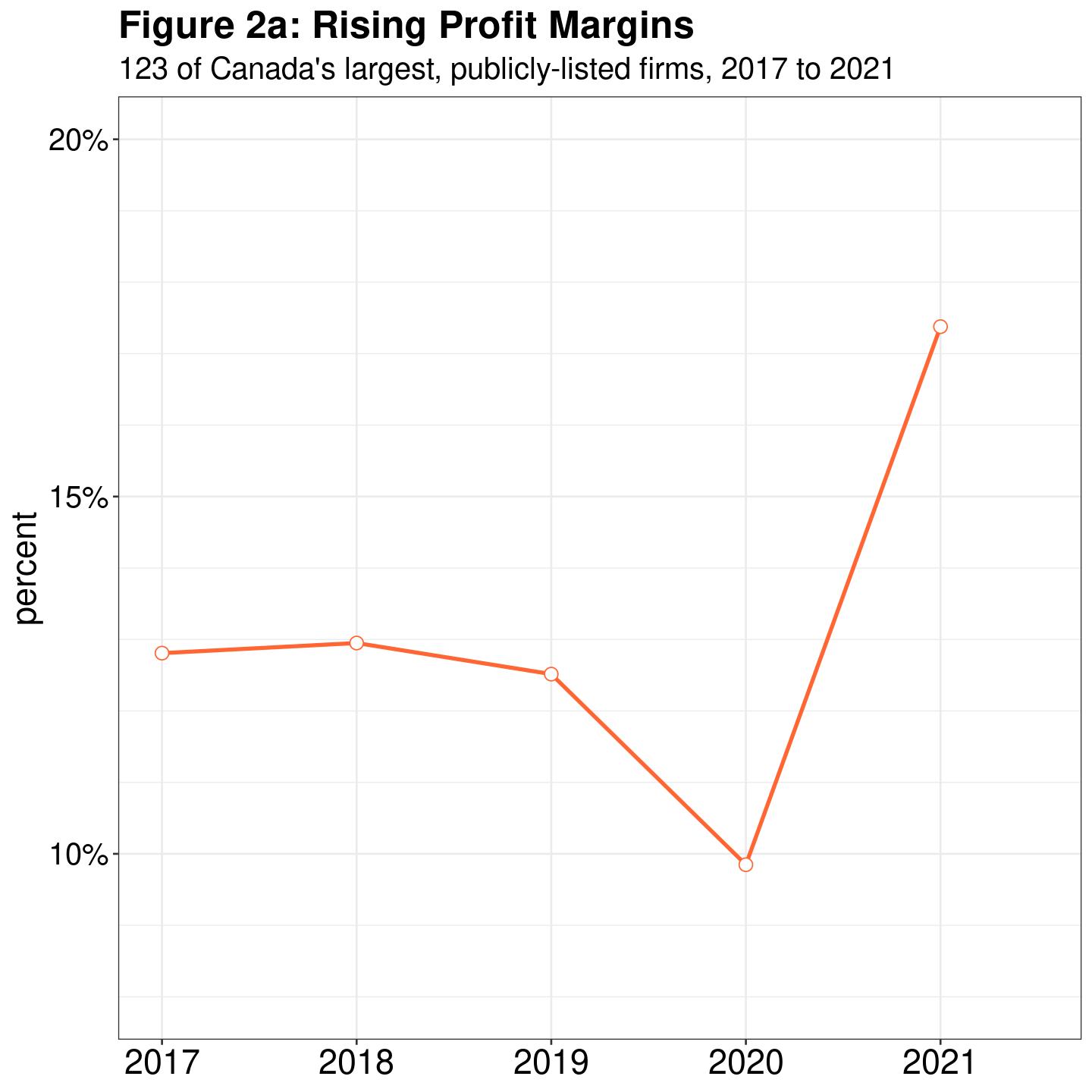 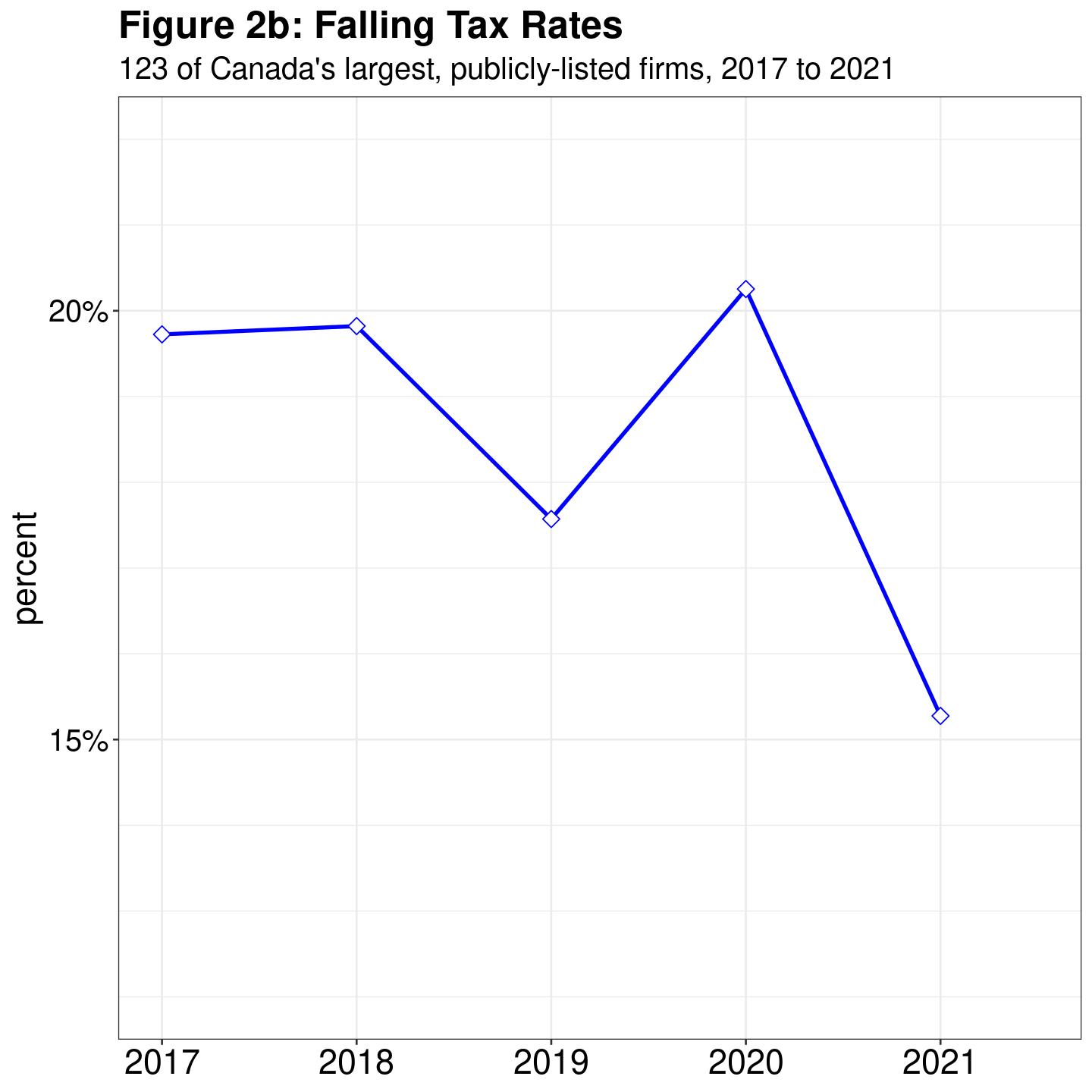 Note: The effective tax rate is taxes paid as a percentage of pre-tax income. The profit margin is pre-tax income as a share of total revenue.

In other words, although corporate operating costs increased in 2021, those costs were more than passed along to buyers. Canadian corporations were not just responding to inflation. They were helping to drive inflation. And by pushing down their tax rates, the corporations were able to keep more of those inflated profits. The affordability crisis of Canadians and record corporate profits are two sides of the same coin. A windfall profits tax should be considered as a way to address both.

The largest tax gap for 2017 to 2021 belonged to Brookfield Asset Management. Close behind was the oil and gas company Canadian Natural Resources. However, large tax gaps are not limited to just one or two industries. Figure 3 shows the 20 biggest total tax gaps over the last five years. It includes companies from a range of industries. Four of the Big 5 Banks are there (RBC had the 26th largest tax gap). In addition to Canadian Natural Resources, Imperial Oil and Barrick Gold represent extractive companies. Canada’s pipeline giants, Enbridge and TC Energy, are third and sixth, respectively. While Bell was the only telecom to make the Top 20, Rogers is 29th and Telus is 31st. 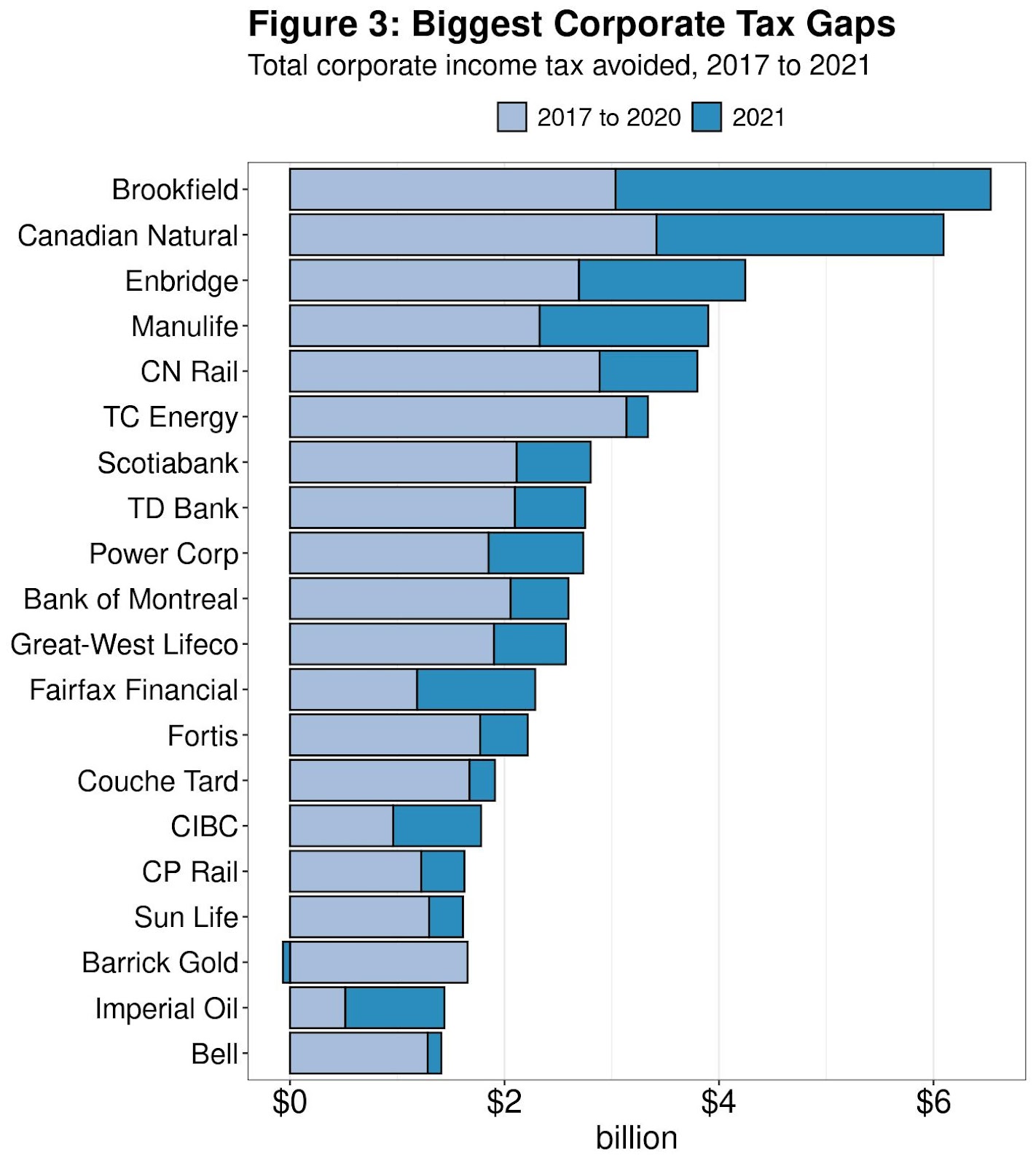 Note: The tax gap is each company’s total over the years analyzed. Note that Barrick Gold had a slightly negative tax gap in 2021—the company’s effective tax rate was higher than the statutory rate.

How do corporations avoid taxes?

Corporations are able to avoid taxes through a variety of means that range from perfectly legal deductions to tax planning maneuvers of questionable legality.

Among the most significant ways that corporations avoid taxes is by taking advantage of tax havens. Complex and opaque corporate structures allow companies to record revenue and profit in low-tax jurisdictions even if it was not generated in that jurisdiction.

A lack of transparency means we are unable to identify how much corporate tax avoidance is due to profit-shifting as opposed to legitimate business operations in low-tax jurisdictions. In fact, despite examining several years of financial disclosures for some of the companies with the largest tax gaps, we were unable to clarify how they managed to push their tax rates so low.

Although legal, many of the loopholes that the government provides to corporations are of questionable benefit. For example, the business meals and entertainment deduction subsidizes luxury perks enjoyed by corporate executives. [4] Also, unlike the United States, Canada does not limit the amount of executive compensation that companies can claim as a business expense, which exacerbates the large and growing divide between executive and worker pay. [5] Many deductions—such as the ability to carry losses into subsequent years —are intended to reduce investor risks. However, this does not eliminate the risk, it merely socializes it. That means investors who get to direct investment get to claim the profits from successful investments, and foist a portion of the losses onto the public through reduced tax revenue.

There are incentives for corporations to push at the boundaries of tax laws. The CRA continues to be under-funded and investigating corporate taxes is extremely complex. It takes significant time and resources to identify questionable transactions, and even more time and effort to challenge those transactions. Yet, the penalties for contravening the law are meagre.

For example, one of the tools the government has to stop aggressive tax avoidance is the ‘General Anti-avoidance Rule’, known as GAAR. This is intended to stop corporations from using tax plans that might adhere to the letter of the law, but violate the purpose of the law, such as organizing a transaction solely to take advantage of some tax benefit. However, as it is currently legislated, there is no penalty associated with GAAR violations. That means even if a corporation loses a claimed deduction, the cost is only the tax they would have paid in the first place.

Although Justin Trudeau’s government has acknowledged the problem of excessive corporate power and tax avoidance, it has done too little to confront it. It is finally undertaking a long overdue update of GAAR, but has delayed consultations on the use of GAAR and exploitation of tax havens. This is indicative of an overall lack of urgency.

Although the enormous increase in the tax gap in 2021 is very troublesome, we should not assume worsening corporate tax avoidance is inevitable.

Our analysis is an update of research published in 2017 by the Toronto Star and Corporate Knights, which looked at the corporate tax gap for 2011 to 2016. [6] In 2016 the effective tax rate dropped to 15.5%. We found that the following three years all had markedly higher rates.

This variability among corporations in the same business raises red flags about the methods used to avoid taxes. How is one bank able to significantly cut their tax payments while another is not?

Canada’s largest corporations are powerful forces in our economy. Their combined revenue is more than twice the GDP of Western Canada. Enormous power must be balanced with high levels of transparency and accountability. The government needs to investigate and explain why the 2021 corporate tax gap was so much larger than earlier years. We cannot effectively tackle the tax gap if it isn’t clear how companies are lowering their taxes.

Canadians deserve greater public transparency of corporate financial data. The government has taken commendable steps to improve transparency with plans for a beneficial ownership registry. But if we are going to allow corporations to control so much of our economy, then they need to be more accountable. Canadians deserve to know how corporations are avoiding taxes so they can decide if it is legitimate and beneficial or not.

Along with greater transparency, there are steps the government can take to reduce the tax gap. These are some of the actions that should be taken:

Of course, defenders of corporate interests will claim that higher corporate taxes lead to lower investment or higher prices. This mantra has been repeatedly debunked. Decades of low corporate taxes have not produced the promised investment and jobs. [7] In reality, corporations are raising prices despite ultra-low taxes, making life less affordable for Canadians. We all stand to benefit from greater corporate transparency and fairer taxation.