Submission: Comments on implementation of the 2020 Fall Economic Statement 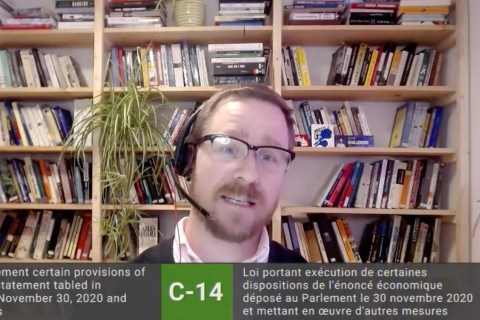 To the Standing Committee on Finance regarding Meeting No. 27, on the Study of Bill C-14 - "An act to implement the provisions of the economic statement tables in Parliament on November 30th 2020 and other measures"; the 2020 Fall Economic Statement :

Thank you kindly for having Canadians for Tax Fairness comment on this bill. If I am not mistaken, members of every party, in the course of speaking to Bill C-14, expressed support for tax fairness. That is music to the ears of our organization. Now we need to see some real action!

Predictably, even insufficient support has led to fear-mongering about the debt. Most of the concerns are misguided and misleading.

Eventually, if the money circulating in the economy does not increase the products, services, and assets that we want to buy, we will get inflation. At the moment, this is a remote concern. Despite worries at the beginning of the pandemic, and misinformed fears recently, inflation remains well below the Bank of Canada’s longstanding target of 2%.

We have a trickle-up economy. Consider money given directly to people at the bottom of our economic hierarchy. Some of that money gets spent on rent, which goes to a landlord. The landlord uses it to cover the mortgage, which goes to a lender. The lending company uses some of that money to pay its workers, while some will be used to pay its own creditors, and some may go to dividends. Those workers will buy food at a grocery chain, which, again, will pay workers, as well as creditors and equity owners. As the money spent into the economy circulates, portions of it are continually syphoned off to asset owners.

The wealthy can use their money to shape our society in detrimental ways. They fund think tanks that defend their interests while presenting as neutral commentators. They hire lobbyists to influence lawmakers on policies that benefit them. They employ an untold number of people to bend tax laws and exploit offshore tax havens. This applies to both wealthy families and powerful corporations.

Wealth taxes and excess profit taxes—alongside more progressive income taxes—are powerful tools to address inequality and its myriad harms, in addition to being sources of government revenue. Additionally, government should act promptly to close tax loopholes and end the use of tax havens. These measures would create fiscal space for the kinds of bold government initiatives that we need to support people and resurrect our economy coming out of the pandemic.

The pandemic teaches us that we are all in this together. The myth of the market justly rewarding what is socially valuable must be abandoned. When the pandemic struck, and we needed decisive action to keep the essential parts of our economy functioning, it was not wealthy people, via the market, who made that happen. It was government. The same is even more true of the climate crisis. The government needs to spend large amounts of money to transition our economy to carbon neutrality. That money will trickle up where it will unjustly empower the wealthy.

Measures like wealth taxes, excess profit taxes, and closing tax loopholes, will keep that money moving so it can serve our shared interests. These must be key components of the fiscal toolkit as we deal with the aftermath of the pandemic and the on-going climate crisis.

Watch a video of the full meeting here, including further comments by Dr. Cochrane & other participants.