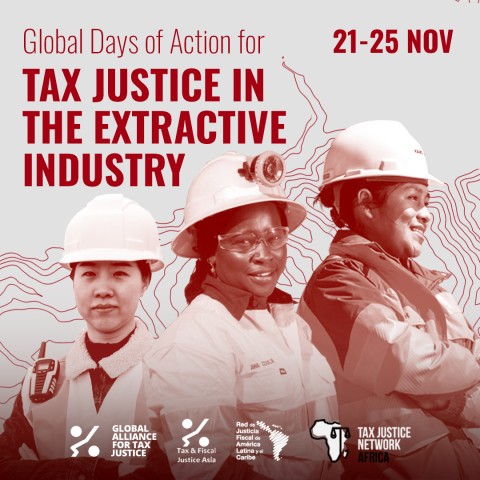 The Global Days of Action campaign builds on the demands that GATJ members have been pushing for since 2019. However, this year, members are calling specifically for excess profits taxes on oil, mining and gas companies.

This year’s focus on taxing windfall profits is particularly important in Canada, where large oil and gas corporations are seeing higher profits while families are struggling with rising energy prices. Canadians for Tax Fairness is advocating for the federal government to introduce a windfall tax on these excess profits to help pay for climate change action and to help households deal with inflation.

The continuing impacts of the global pandemic and the climate crisis have spawned a glaring gap between a tiny set of winners and the majority of the world’s population. In 2022, net profits of the 40 largest mining corporations grew by 127% from the previous year, surpassing their pre-pandemic revenues by more than double. However, few people benefited from the boom: research shows that there was a 130% rise in dividend payments and rewards for top executives, whereas many lost their homes, incomes and livelihoods.

Social movements, particularly in climate, labour and gender justice, have been raising proposals for the extractive sector to operate responsibly with communities and the environment. This campaign brings the perspectives of tax justice and the broader economic justice movement, calling for a rights-based economy that puts people and the planet at the centre of discussions and decision-making.

“The global crises make closing tax loopholes and raising more public revenues more urgent and imperative. However, the extractive sector continues to be given free rein to extract resources and profits with neither limits nor regard for social and economic costs or for irreversible environmental impacts,” said Dereje Alemayehu, Executive Coordinator of GATJ.

“In addition to the profit shifting and illicit financial flows rampant in this sector, facilitated by the broken global tax governance and lack of regulatory and transparency mechanisms, the extra profits being generated by those benefiting from the crises remains untaxed. It is high time to take urgent and rigorous measures in the extractives sector to raise more revenue: stopping the perverse flow of resources from low-income to rich-OECD countries; scrapping tax giveaways, curbing loopholes and tax abuse, as well as immediately introducing tax on extra profits. An inclusive and equitable recovery will only be possible through tax justice.”

To learn more about the campaign, visit: https://apmdd.org/programs/development-finance/tj/tjei/join-the-global-…