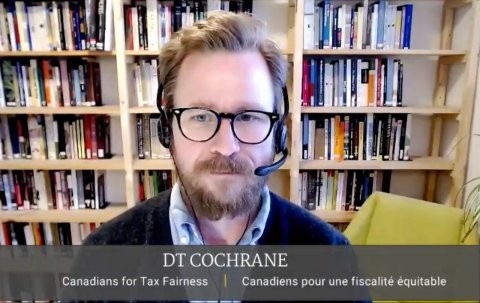 As Canadians for Tax Fairness, we are concerned about two long-term trends in our tax system that stymie our ability to achieve a sustainable, equitable, and prosperous future.

First, four decades of changes to our tax laws have drastically reduced public revenues. Second, most of that lost revenue is due to tax breaks that largely benefit the wealthiest individuals and corporations. A recent review out of the London School of Economics showed that such tax changes had little economic benefit while exacerbating wealth and income inequality.

During the 2021 election, every party made promises to ensure the wealthiest pay their fair share. We appreciate your commitment to addressing the issue and expect the all-party consensus on more CRA funding will result in prompt implementation.

However, fairness will not be achieved with a few incremental measures. We need new tools such as a wealth tax and the digital services tax. Both tools are well studied and there is no reason not to move forward.

But we also need to substantially overhaul our tax system in three key ways:

We’ve heard a lot about the skyrocketing wealth of billionaires, but I want to focus on the rising wealth and power of corporations, aided and abetted by Canadian governments.

That is how much tax revenue Canadian governments have lost from ill-advised corporate tax cuts and ever-worsening tax avoidance since 2000. This deprived governments of revenue that could have expanded and maintained vital public services.

Did corporations invest this money in R&D or greater productive capacity, which many claimed would happen? No. Instead inequality rose, along with higher executive salaries, as well as more corporate concentration and influence.

The current government has said it will address these problems, and taken some steps, promising more.

We support limiting stock option deductions and interest deductions. However, this incremental approach is out-of-step with our desperate need for substantial and sustained government action on numerous issues: affordable housing, a more robust health care system, and climate-resilient infrastructure to name just three.

Further, contrast these incremental measures with the extreme rate cuts made by Liberal and Conservative governments in the 2000s and early-2010s. Those cuts saw the federal corporate tax rate almost halved to just 15%.

Reversing the cuts is long overdue. We commend the Liberal government for promising to raise the tax rate on the country’s largest financial institutions. However, a general increase, as proposed by the NDP, is preferable. We recommend an increase to 20%, which the PBO says would raise revenue by almost $8 billion.

In addition to raising the corporate tax rate, we need to close loopholes that overwhelmingly benefit the largest corporations and the wealthiest individuals. Let me name just three.

First, move to full inclusion of capital gains. This is a $22 billion–and growing–annual handout to the rich and powerful.

Second, get rid of the corporate dividend tax credit loophole, which costs the government $5 billion a year. Over 90% of that goes to the richest 10%.

Finally, the government must continue to improve corporate transparency. Last budget’s funding toward a public beneficial ownership registry is an important step. The next step is to publicly disclose country-by-country financial reporting for the largest transnational corporations. There is too much we do not know about some of the most powerful companies in Canada.

The pandemic and climate change have created much suffering and uncertainty. But they’ve opened many people’s eyes to the essential nature of properly-funded public institutions.